New Coronavirus Can Spread Among Humans, But It Started in a Wildlife Market

The Wuhan coronavirus has now been confirmed in multiple countries and health officials see a common thread with past outbreaks. The Wuhan virus, like the SARS before it, is zoonotic, a disease that started in animals before spreading to humans. 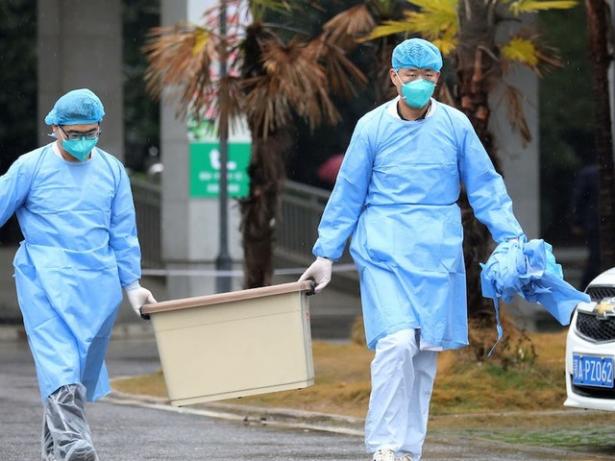 Medical workers near the Jinyintan hospital in Wuhan, China, which houses patients with the new coronavirus. , Reuters

HISTORY APPEARS TO be repeating itself.

Almost 20 years ago, a virus appeared in wildlife markets in southern China, and it was unlike any the world had seen. It was winter 2003, and sufferers complained of fever, chills, headache, and dry coughs—all symptoms you might expect during cold and flu season.

But this condition would progress into a lethal form of pneumonia, one that left honeycomb-shaped holes in people’s lungs and generated severe respiratory failure in a quarter of patients. While most infections only spread to three additional people, some of the afflicted became “superspreaders”—patients who unwittingly transmitted the disease to dozens at a time. By the time the epidemic of severe acute respiratory syndrome (SARS) ended seven months later, more than 8,000 cases and 800 deaths stretched across 32 countries.

That’s why international officials are now concerned over a new, SARS-related virus that has emerged in central China. The disease has spread to major cities like Beijing, Shanghai, and Shenzhen—as well as to neighboring Taiwan, Thailand, Japan, and South Korea—in just three weeks. On Tuesday, the Centers for Disease Control and Prevention (CDC) reported the first U.S. based case in Washington State.

“Human-to-human spread has been confirmed [but] how easily or sustainably this virus is spreading remains unknown,” Nancy Messonnier, director of the National Center for Immunization and Respiratory Diseases at the CDC, said in a press conference where she announced the development of a rapid genetic test for the Wuhan virus. “Right now we are testing for this virus at CDC, but in the coming weeks we anticipate sharing these tests with domestic and international partners.”

As of Wednesday, nearly 450 cases have been reported globally along with nine deaths, and the World Health Organization plans to hold an emergency meeting on Wednesday to decide if the outbreak represents a public health emergency of international concern. Epidemiologists suspect thousands of cases likely exist. Last Friday, the CDC announced that screening for the new virus would begin at three major U.S. airports, but the first U.S. patient arrived before this surveillance had even begun.

As with SARS, all of this fuss appears to have emerged due to wildlife trade, and virologists aren’t surprised.

“If we were to shut the wildlife markets, a lot of these outbreaks would be a thing of the past,” says Ian Lipkin, director of Columbia University’s Center for Infection and Immunity, whose lab worked with Chinese officials to develop early diagnostic tests for SARS.

That’s because both SARS and the new outbreak are zoonotic, meaning these diseases started in animals before spreading to humans. Zoonotic diseases rank among the world’s most infamous. HIV, Ebola, and H5N1 influenza, for example, all percolated in wildlife before close interactions with humans spawned international outbreaks. With SARS, food preparers and people who handled, killed, and sold wild animals made up nearly 40 percent of the first cases. The earliest episodes were also among people who were more likely to live within walking distance of wildlife markets.

But why might such conditions create a breeding ground for zoonotic diseases?

“When you bring animals together in these unnatural situations, you have the risk of human diseases emerging,” says Kevin Olival, a disease ecologist and conservationist at the EcoHealth Alliance. “If the animals are housed in bad conditions under a lot of stress, it might create a better opportunity for them to shed virus and to be sick.”

This interplay between virus and animal can also help trace the source of an epidemic. Viruses mutate as they spread and multiply, a trait that virologists and wildlife biologists can use to trace the evolution of a disease, even if it hops between animals.

SARS and the new virus behind the Wuhan outbreak are highly related, both belonging to a family called coronaviruses. Coronaviruses are a large family of viruses, some of which cause illness in people, while others circulate among animals, including camels, cats, and bats.

Four months after the SARS outbreak started in early 2003, research teams in Hong Kong tested racoon dogs, palm civets, and badgers and discovered close relatives of the SARS coronavirus—the first evidence that the disease existed outside of humans.

The discovery kicked off a rush of viral sleuthing in wildlife, which would ultimately point to Rhinolophus horseshoe bats in China as the likely source of SARS. Global surveys would ultimately reveal that the ancestors and relatives of SARS had been circulating in bats across Asia, Africa, and Europe for years. Bats are now considered the original source of all major coronaviruses.

“The genetic sequence of the virus itself can lead you back to the source,” Olival says. “In Wuhan’s case, the closest match is other SARS-related coronaviruses that are found in bats.”

Wildlife surveys conducted by EcoHealth Alliance in China and elsewhere in Asia show the highest prevalence of coronaviruses tend to be extruded by animals through feces, or guano in the case of bats. Coronaviruses not only spread via the air and the respiratory tract, but also if fecal matter comes in contact with another creature’s mouth. Bats aren’t exactly clean, so if one nibbles on a fruit, the food may get contaminated with fecal matter. If the fruit drops to the ground, then it can serve as a viral crossover point for farmed animals like civets.

So far, it appears that animal-based coronaviruses leap into humans and cause severe illness only on rare occasions. SARS represented the first documented occurrence of a coronavirus spillover, and it was followed by Middle East Respiratory Syndrome, a similar but distinct virus that sprouted in Saudi Arabia in 2012 and also spread internationally.

The MERS saga reinforced the animal story told by SARS. The MERS coronavirus hailed from bats but used domesticated mammals—in this case, camels—as a bridge for reaching humans. The initial case of MERS involved a 60-year-old man who owned four companion camels, which slept in a paddock adjacent to his house.

A 2014 study by Lipkin’s lab and zoologist Abdulaziz Alagaili at King Saud University found antibodies against MERS—a telltale sign of infection—in camel blood samples dating back to 1993. The MERS virus had circulated for more than 20 years without anyone noticing.

“We did work in two slaughterhouses in Saudi Arabia, where people were slaughtering camels,” says Lipkin. “In some instances, they were washing the meat with high pressure hoses before packing it into shrink wrap. You could find MERS coronavirus on meat that was destined for supermarkets.”

Saudi Arabia imports thousands of camels each year from African nations, much of which serves as a food source, especially during the Muslim pilgrimage. Biologists found signs of MERS infection in camels hailing from African countries like Ethiopia, Kenya, Tunisia, Egypt, and Nigeria.

Unlike SARS, which emerged and flamed out within a year, MERS became somewhat entrenched in human communities, with cases reported in Saudi Arabia through 2017. But this persistence raised the possibility of developing a vaccine, given there was a consistent population in which to test the effectiveness of such a treatment.

“You could vaccinate the people who have the most common contact with camels, like the bedouins and the people who work in the slaughterhouses,” Lipkin says.

However, a MERS vaccine never materialized despite widespread efforts. As of today, no specific treatment exists for SARS or MERS.

In the absence of a medical remedy, infection control strategies—like washing hands, quarantines, and hygiene—become the sole tools for keeping SARS, MERS, and now the Wuhan coronavirus in check.

It’s hard to say what people should expect from the Wuhan coronavirus. In the spectrum of epidemics, SARS fell toward the side of worst-case scenarios, while MERS was lethal but much milder in scope.

Most pneumonia-like conditions reserve the worst of their harm for older populations, but SARS was just as likely to punch a hole in the lungs of a young adult as an elderly person; the median age of SARS victims hovered around 40. MERS, by contrast, was mostly severe in patients above 50 years of age, and typically in people with preexisting conditions.

“It's unclear whether or not this [Wuhan] virus is simply going to die out or whether it's going to evolve into something that's more pathogenic,” Lipkin says. “We don’t have any evidence yet of superspreaders, and hopefully we never will. But we also don’t know how long this new coronavirus lasts on surfaces, or how long people will continue to shed virus after being infected.”

At first, officials claimed all of the Wuhan coronavirus involved crossover events from animals, but now the disease appears to be spreading from human to human. On Monday, Chinese officials confirmed that 14 health care workers had contracted the virus, and the patient in Washington reported that he had travelled through Wuhan.

How the Wuhan coronavirus made the final jump into humans will also remain a mystery until China releases more details about what was housed in the now infamous seafood market. Officials closed and cut off access to the market on New Year’s Day. But those clues could help investigators identify which animals might be capable of carrying and spreading the virus both in China and abroad.

The Wuhan outbreak also raises the question of whether wildlife trade needs better oversight, or ought to be shuttered for good.

[Nsikan Akpan, PhD, is a science writer, the science producer for the PBS NewsHour, and the co-creator of ScienceScope, the award-winning science video series. Akpan won the 2019 George Foster Peabody Award for the PBS NewsHour series, The Plastic Problem, and is the former staff science writer for Columbia University's Center for Infection and Immunity. You can follow his blog at www.NsikanAkpan.com.]