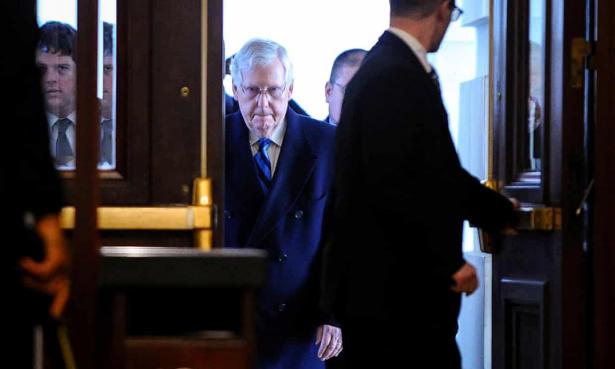 ‘With patience and decorum, Mitch McConnell has brought southern justice to the US Senate’ , Mary Calvert/Reuters

On Wednesday last week, before the House managers began their opening statement in the impeachment trial of Donald J Trump, the Senate majority leader, Mitch McConnell, stood by his desk on the Senate floor and conferred at length with the White House counsel, Pat Cipollone. When the Senate minority leader, Chuck Schumer, noticed their excited gestures from across the aisle, he cupped a hand to his ear and made a show of trying to listen in. Members of the media who were confined to the press gallery took note and chuckled. The acquittal Trump has demanded of Senate Republicans was all but assured, and McConnell felt no need to pretend impartiality.

Trump impeachment trial: what you need to know
Robert Reich

But the corruption that is regularly laughed off in our age of political cynicism makes me shudder – not least as the son of civil rights activists who risked their lives to expand American democracy in the 20th century. The coordinated cover-up we are witnessing as 53 senators conspire to facilitate Trump’s obstruction of Congress is deeply troubling to anyone who knows the long history of southern courthouses where district attorneys openly coordinated with all-white juries and corrupt judges to cover up acts of racial terror. With patience and decorum, Mitch McConnell has brought southern justice to the US Senate.

In 1955, when racial terror surged in response to the supreme court’s Brown decision, the white men who brutally murdered Emmett Till were acquitted by an all-white jury. The prosecutor, the judge and local media worked in tandem to cover up the truth, then the perpetrators – protected by the legal tenet of double jeopardy – sold a version of their story to Look magazine that essentially admitted guilt.

In the summer of 1964, when three civil rights workers disappeared while investigating a church burning in Philadelphia, Mississippi, local authorities told the FBI their investigation had found nothing. Because hundreds of college students from the nation’s elite universities had turned the nation’s attention on Mississippi that Freedom Summer, the FBI could not simply move on. They spent the entire summer combing the area for more evidence. In the end they found a literal cover-up: Andrew Goodman, Micky Schwerner and James Chaney had been murdered and buried in a local dam as part of a conspiracy that included the Ku Klux Klan, the Philadelphia police department and the Neshoba county sheriff’s office. In two months of investigations to expose one cover-up, federal authorities found the remains of eight other African Americans.

Half a century later, we have fewer voting rights protections in America than we did in 1965 when the Voting Rights Act was signed into law

We who are heirs of America’s civil rights struggle know how fragile and hard-won our multi-ethnic democracy is. For generations after the end of Reconstruction, anyone who dared to believe that the 13th, 14th and 15th amendments guaranteed them the rights of full citizenship were subject to terrorism by local law enforcement. If a crime was committed to rig the next election, it was covered up. This was the everyday practice of southern justice under Jim Crow.

People like John Lewis, who voted as a member of the House to impeach Donald Trump for seeking foreign help to rig the 2020 election, went to jail and faced beatings in the 1960s to ensure free and fair elections. Half a century later, we have fewer voting rights protections in America than we did in 1965, when the Voting Rights Act was signed into law. As the majority leader in the Senate, Mitch McConnell covered up the voter suppression efforts that guaranteed him a Senate majority long before he was called upon to cover up Donald Trump’s efforts to rig the next election.

Americans remember from the Nixon impeachment that the cover-up is evidence of the crime. But it is more than that. Time and again, the civil rights movement has learned that the cost of the cover-up is democracy itself. When the people who have power can abuse that power to influence elections and suppress the electoral power of those who would challenge them, we do not have a representative democracy. We have southern justice covering for minority rule.

But if we who have been denied full citizenship in this nation know the cost of a cover-up, we also know the power of moral movements to tap a greater power and push America toward a more perfect union. Slaveholders invested everything they had to cover up the crimes of human bondage. Jim Crow did everything it knew to cover up the immorality of separate but equal. And for a long time, it looked like they had all the votes. But movements of people committed to the truth did not give up. They kept believing and building on the conviction that the moral arc of the universe bends toward justice. And they uncovered the lies that crippled democracy in their day. Our present moral crisis demands nothing less of us.

William J Barber II is co-chair of the Poor People’s Campaign: A National Call for Moral Revival, which is mobilizing poor people and their allies for a mass assembly and march on Washington in June 2020

The Guardian Weekly magazine is a round-up of the world news, opinion and long reads that have shaped the week. Inside, the past seven days' most memorable stories are reframed with striking photography and insightful companion pieces, all handpicked from The Guardian and The Observer. Subscribe.