After months of upheaval, Instacart employees voted to form the Silicon Valley app's first union in the United States. 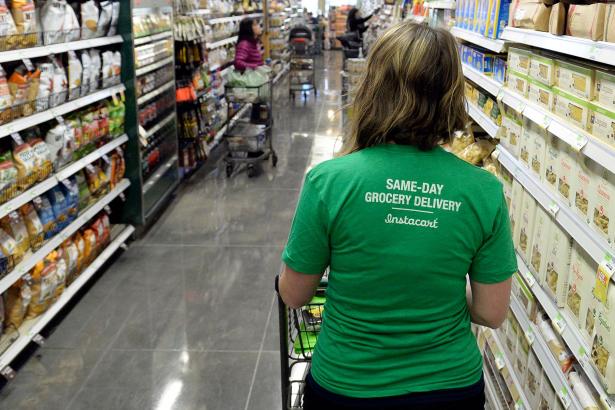 A group of Instacart employees in the Chicago suburb Skokie voted to unionize with the United Food and Commercial Workers Local 1546 on Saturday—a historic win for the grocery delivery platform. The vote was 10-to-4 in favor of the union, according to workers.

"The overwhelming majority of the employees made history by becoming the first Instacart employees to win a certified union election in the United States," UFCW Local 1546 wrote in a press statement.

The union victory sends a message to other gig workers around the country who are fed up with working conditions at Silicon Valley tech companies like Instacart—which has faced months of backlash in the form of worker-led strikes, protests, and online boycotts.

In the days leading up to the election, Instacart enlisted high-level managers to visit the Mariano’s grocery store where the unionizing workers pick and pack groceries for delivery. The managers distributed anti-union literature warning employees that a union would drain paychecks and “exercise a great deal of control” over workers. “I encourage you to look at all of the FACTS and vote “NO” on February 1st,” a senior operations manager for Instacart wrote in one of the memos obtained by Motherboard, dated January 22.

"The workers remained united throughout the organizing campaign despite being subjected to their company's anti-union stance," UFCW Local 1546 president Bob O'Toole said in a press statement. "We look forward to this opportunity to work with our new Instacart members in negotiating their first union contract."

While independent contractors who ferry groceries to customers make up the majority of Instacart’s 142,000 national “shopper” workforce, roughly 12,000 of those workers are Instacart employees, known as in-store “shoppers,” who pack groceries in select grocery stores. These in-store workers are capped at 30 hours a week, and are legally classified as employees—making them eligible to unionize—unlike the rest of Instacart’s workforce.

“Instacart cares deeply about all members of our community, which includes in-store shoppers who are part-time employees," a spokesperson from Instacart's San Francisco headquarters told Motherboard following news of the union's victory. "We will always support employee freedom and choice, and we respect our employees’ rights to explore unionization."

"Pending certification of the election results, Instacart will honor the outcome of this election and the decision of these 15 part-time employees in Skokie to choose union representation," the spokesperson continued. "We will then begin the process of negotiating in good faith on an initial collective bargaining agreement that covers this location. While today’s election only affects in-store employees assigned to this store, we remain committed to providing the best experience for all customers and employees.”

One of the union campaign’s lead organizers, Joe Loftis, told Motherboard that his Instacart co-workers decided to unionize to address high turnover, the rapid pace of work, and the opaque algorithm for rating employees. He told Motherboard that unionizing employees currently earn $13 an hour, the minimum wage in Skokie—and are capped at 29 hours a week, which means they do not receive healthcare and other benefits. For many of these workers, it’s a second job.

“This is a great first step for building confidence among employees who have been abused and threatened for years,” Matthew Telles, a gig worker in Chicago who has worked on Instacart since October 2015 and plays an active role in the drive to organize Instacart workers across the country on social media groups, told Motherboard. “I hope this gives other Instacart employees at other locations the message that it’s okay to fight and step up, and lets them know that they have a massive support system from other Instacart workers and don’t need to be scared.”

The victory for Instacart workers arrives during a period of unprecedented organizing among both blue and white collar tech workers in the United States. Between 2017 and 2019, the number of actions organized by tech workers almost tripled. Last year alone, tech workers at companies including Google, Amazon, Facebook, and Microsoft led more than 100 actions. And despite the spotlight on white collar workers, the majority of these actions were led by blue warehouse workers, gig workers, and service employees, according to the online database “Collective Actions in Tech.”

In late January, tech workers at the crowdfunding platform, Kickstarter, also voted on whether to unionize. If they win, Kickstarter will be the major tech company in the United States to unionize. (Those results votes will be counted in mid-February.)

In recent months, Instacart workers have led the gig worker resistance against major tech companies. In November, several thousand gig workers went on a 3-day national strike, demanding the app reinstate its 10 percent default tip, which it slashed in 2016. Rather than listen to workers’ demands, days later, Instacart eliminated its $3 ‘quality’ bonus, one of the few remaining pay perks, which can account for up to 40 percent of pay, causing a wave of customers to declare they were deactivating the app on Twitter.

This article originally appeared on VICE US.