The Inversion of Human Rights in Brazil

A dictatorship-era torturer is suing one of his victims in Brazil in a stark reminder of how Bolsonaro emboldens rights abusers. 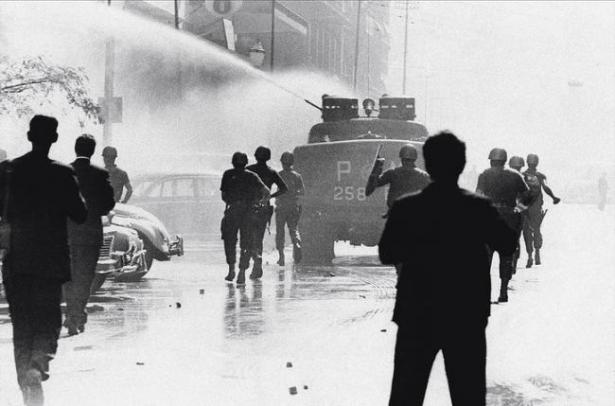 A scene in São Paulo, Brazil, on April 1, 1964, during the military coup against President João Goulart that installed a dictatorship., Photo via Public Archive of São Paulo State

Aluízio Palmar, a Brazilian journalist, human rights activist, and former political prisoner, is being sued for defamation by his own torturer. The physical and psychological torture happened 40 years ago, when Palmar was imprisoned by the military dictatorship that ruled Brazil from 1964 to 1985. But it was only last month, in a climate defined by Brazil’s right-wing president Jair Bolsonaro, that Palmar’s abuser felt emboldened to file the suit.

Like thousands of others under the military regime, Palmar was subjected to various forms of torture: electrocution, simulated drowning, and the infamous “parrots perch” where he was strung up on a pole with his hands and feet tied together, his body dangling below, crouched and suspended in the air. Palmar was tortured by several different officers in the four detention centers where he was held between 1969 and 1971. One of his abusers always stood out: Lieutenant Mário Espedito Ostrovski.

When Palmar was imprisoned, his wife was pregnant with their child. Ostrovski knew this and during interrogation sessions—which included physical abuse—the lieutenant brought up Palmar’s family. “He told me he’d go arrest my wife, that he’d make her lose the baby we were expecting,” Palmar recalled. Ostrovski taunted Palmar and scolded him for making his child a political subversive, even before birth: “He told me that ideology is passed down through blood.”

Now, the 76-year-old Palmar is involved in a lawsuit with Ostrovski. In a cruel twist, it is not a case of the victim seeking justice from his abuser. Instead, Ostrovski—who became a lawyer after his military service—has sued Palmar for defamation of character and “moral damages” over his efforts to bring public attention to Ostrovski’s crimes. At a moment when human rights activists are facing increasing dangers in Brazil under a president who both glorifies and normalizes Brazil’s violent history, a victim of torture is being sued for libel by the man who tortured him.

Ostrovski’s human rights abuses have been well-documented, including in the 1984 report on torture titled Brasil: Nunca Mais (Brazil: Never Again) and also in the 2014 National Truth Commission, the largest effort to-date to elucidate the repression of Brazil’s military regime. In these reports, multiple victims testified to Ostrovski’s acts of torture.

Despite this evidence, Ostrovski has never stood trial. Nor, for that matter, has anyone in Brazil been held accountable for the cruelty of dictatorship. Unlike in neighboring Chile and Argentina where limited trials did take place, not a single member of the Brazilian military has faced criminal charges.

The lack of legal justice for Brazil’s human rights abusers helps explain the lawsuit against Palmar. Since the 1980s, Palmar has been an ardent human rights activist and journalist. He has co-founded a political newspaper, written a book on the forced disappearances of six Brazilian dissidents, maintained a website that publishes declassified documents, and established the Center for Human Rights and Popular Memory in the city of Foz do Iguaçu.

So although there has been a concerted absence of political and institutional justice, Palmar and countless Brazilians like him have fought to keep the memory of the past alive. One of these initiatives took place in 2013 and stands as the crux of the current lawsuit.

As part of the investigations for the National Truth Commission, Palmar and three other torture victims testified in a public hearing. In the aftermath of this testimony, protestors engaged in a political action common in Latin America known as an escrache: to expose Ostrovisky—who had been living in relatively anonymity—the crowd marched to his law office and held a noisy rally to “out” him as a torturer. Palmar himself did not take part in the protest, but he did publicize the event on Facebook.

And it is precisely Palmar’s act of sharing the protest on Facebook that Ostroviski is now citing in his claim for legal and financial restitution. But if the event in question took place in 2013, why is the lawsuit only now being brought forth?

The answer ties directly to Brazil’s current political landscape. Since Bolsonaro’s election in October 2018, a long-standing culture of impunity has become even more brazen. An army captain in the final years of the dictatorship, Bolsonaro has built his political career on an unapologetic nostalgia for military rule. Among his many headline-grabbing statements, Bolsonaro invoked the dictatorship’s most notorious torturer in voting to impeach the former president Dilma Rousseff—herself a torture victim—and he has stated that the regime’s murder of some 500 citizens did not go far enough.

Carla Luciana Silva, a professor of history at the State University of Western Paraná, sees both Bolsonaro’s presidency and Ostrovski’s lawsuit as the result of Brazil’s disjointed transition from military to civilian rule, where many of the dictatorship-era policies remained in place even after the official return of democracy. In particular, she notes the legacy of the 1979 Amnesty Law that has made it nearly impossible to bring perpetrators to justice.

“Since 1979, torturers have been protected by a law that is interpreted as impunity for them,” Luciana Silva said. “Now they are sheltered by an irresponsible president, who clearly governs for only a portion of the population. The torturer felt comfortable suing his victim as if nothing were going to happen.”

As both a journalist and a human rights activist, Palmar embodies two of the sectors of civil society most under threat in Bolsonaro’s Brazil. Between early December and early January alone, multiple journalists and media outlets in Brazil have suffered abuse, including two reporters in Rondônia receiving suspended jail time in a defamation case and a radio station’s antennae being destroyed by arson. Bolsonaro himself recently renewed his antagonism against the press: When asked in December about the growing corruption scandal surrounding his family, he deflected by verbally assaulted the journalist: “You look terribly like a homosexual.” These threats contribute to a dangerous reality where since 2010, 22 journalists in Brazil have been killed.

And according to the NGO Frontline Defenders, Brazil is also one of the deadliest places on earth for human rights activists, with a frightening increase in the threats, arrests, and physical attacks on activists, particularly around environmental, Indigenous, and LGBTQI+ rights. In 2019, the number of Indigenous leaders and activists killed reached the highest rate in two decades, and the Bolsonaro regime continues to skirt any responsibility to solve the 2018 assassination of Marielle Franco, a city councilwoman, gay Black feminist, and human rights activist. Bolsonaro also lashed out against the media when evidence emerged of apparent links between his family and Franco’s suspected killers.

Palmar’s situation is symptomatic of how human rights are being inverted in Brazil. There is a double injustice at play: Not only is a survivor of torture being preyed on once again by his former abuser, but the lack of accountability over the past 40 years is now being compounded to such a degree that a torturer feels as though his rights are being abused. In Bolsonaro’s Brazil, torturers like Ostrovski can pervert the legal system to not only silence victims and critics, but to attempt to redefine whose rights actually matter.

Before Bolsonaro, the torturers and human rights abusers of Brazil’s recent past had largely hidden from public view. As part of the National Truth Commission, the accused perpetrators were called to testify. Ostrovski, like so many others, refused to come forward.

Aluízio Palmar offers an unambiguous reason for why Ostrovski has now re-emerged to sue him.

“With Bolsonaro in power, [these abusers] feel free,” Palmar said. “They feel free to go around threatening us, to commit a form of terrorism. And more and more they’re putting Brazilian democracy itself in danger. There is a real enemy, and it’s going to set us back a long time.”

To help bring attention to Bolsonaro’s assault on human rights, the international community must expose the lawsuit against Aluízio Palmar as a baseless attempt to silence a victim and intimidate a journalist. If left unchecked, torturers like Ostrovski and their enablers in power will continue their efforts to turn back the clock and return Brazil to its authoritarian past.

Jacob Blanc is a history professor at the University of Edinburgh.