That’s the whole reason why we have a Presidential Records Act, to prevent Watergate-style cover-ups. More of us need to start paying attention, because this White House is being allowed to destroy evidence about things that we may never know about. 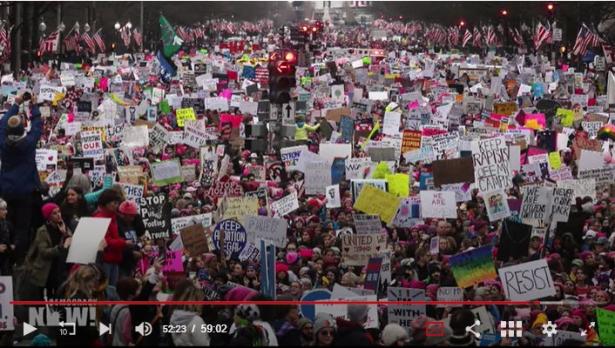 Last month, the National Archives and Records Administration apologized for doctoring a photo of the 2017 Women’s March to remove criticisms of President Trump. The shocking revelation that the agency had altered the image was first reported in The Washington Post. In an exhibit called “Rightfully Hers: American Women and the Vote,” the National Archives had displayed a large image of the first Women’s March. But signs referencing Trump had been blurred to remove his name — including a poster reading “God Hates Trump” and another reading “Trump & GOP — Hands Off Women.” Other signs in the photo referencing female anatomy were also blurred. The National Archives initially stood by its decision to edit the photo, telling The Washington Post that the changes were made “so as not to engage in current political controversy.” For more, we turn to a historian who says this was only the latest example of “a great and growing threat to our nation’s capacity to protect and learn from history.” The National Archives reportedly is allowing millions of documents, including many related to immigrants’ rights, to be expunged. We speak with Matthew Connelly, professor of history at Columbia University and principal investigator at History Lab. His recent piece for The New York Times is headlined “Why You May Never Learn the Truth About ICE.”

AMY GOODMAN: Well, we turn now to a historian who says this was only the latest example of, quote, “a great and growing threat to our nation’s capacity to protect and learn from history.” Matthew Connelly is professor of history at Columbia University, principal investigator at History Lab, his recent piece for The New York Times headlined “Why You May Never Learn the Truth About ICE.” It details how the National Archives is reportedly allowing millions of documents, including many related to immigrant rights, to be expunged.

Professor Matthew Connelly, welcome to Democracy Now! Lay out what you found.

MATTHEW CONNELLY: Well, what I found is the National Archives, which, you know, as a matter of business, in the normal practice of archiving our nation’s record, they have to decide what records are going to be temporary and which ones they need to preserve permanently. And normally, these kinds of documents — they call them records retention schedules — are ones that almost nobody would actually read, except maybe an archivist or an historian. But in this case, it was fascinating, because what I found and what others have found is that records relating to the death, the sexual assault of undocumented immigrants had been designated as temporary. In other words, these were records they decided had to be deleted after sometimes three years, five years, 10 or, at most, 25 years, in this case.

So there was a big outcry. A lot of people — in fact, tens of thousands of people — spoke up in protest. Dozens of members of Congress and the Senate also voiced objections about this. But in December, the archivist of the United States, David Ferriero, announced that they were going to go ahead anyway. They had made some changes, but, in fact, huge numbers of records relating to shoddy medical care, the civil rights violations of these undocumented immigrants, all these records are going to start to be destroyed later this year.

NERMEEN SHAIKH: Well, is there any precedent to this? I mean, who has been in charge? Who has made the decisions here? Do you know of any incident prior to the Trump administration where the National Archives were altered in this way?

MATTHEW CONNELLY: So, in fairness, the National Archives has a tough job, because, in effect, they have to predict the future. They have to try to figure out what it is that future historians, journalists, citizens are going to want to know about the past. But in the past, it was typically agencies, departments, like the CIA, the Pentagon, that would destroy what I think everyone could recognize were vitally important records here and now. So, for example, the CIA has a long history of destroying records of covert operations, mind control experiments and, most recently and notoriously, the torture videos. Similarly, the Pentagon destroyed all of the records of the deliberations of the Joint Chiefs of Staff and, in fact, decided to —

NERMEEN SHAIKH: So, those kinds of documents would normally be in the National Archives?

MATTHEW CONNELLY: Well, one would hope, right? Because under the Federal Records Act, these are historically significant documents that should have been preserved. And it was a violation of federal law that these records were destroyed. So, normally, we’d trust the National Archives to be the watchdog to prevent other parts of the government from destroying the historical record. But, unfortunately, that’s not been happening.

AMY GOODMAN: So, you write, “The Department of the Interior and the National Archives have decided to delete files on endangered species, offshore drilling inspections and the safety of drinking water.” You also talk about, specifically, when we’re talking about ICE, that last month they announced that ICE could go ahead and start destroying records from Trump’s first year, including the detainees’ complaints about civil rights violations and shoddy medical care. Is this different from previous administrations?

MATTHEW CONNELLY: It is. I would say that under this administration things have gone much further, much faster. I think perhaps the best example of that is how Donald Trump tears up his own papers in tiny little pieces. Now, in this case, the National Archives tried to do the right thing. They sent staff to the White House to Scotch tape those papers back together again. I’m not even kidding. So, what happened to them —

MATTHEW CONNELLY: They went to the White House to Scotch tape those pieces of paper back together again. These are our federal employees having to fish out of the trash pieces of paper that Donald Trump had left there rather than leaving a record for the rest of us. And so, they Scotch taped those records back together. So, what happened to those people? They were fired. They were terminated. So —

AMY GOODMAN: And who did they work for?

MATTHEW CONNELLY: They worked for the U.S. National Archives. They worked for all of us, right? And this is what happened to them when they tried to stop this sort of thing. So this administration has gone further than, I think, any other administration before. You have to go back to the Nixon White House to see anything like it. And, in fact, that’s the whole reason why we have a Presidential Records Act, to prevent Watergate-style cover-ups. So, I think more of us need to start paying attention, because, in effect, this White House is being allowed to destroy evidence about things that we may never know about.

AMY GOODMAN: You also talk about the whole issue of the Trump administration around declassification. You tweeted yesterday, “State Department historians have been thwarted by the Pentagon, blocked from declassifying Cold War documents.” And at the CIA, as well.

MATTHEW CONNELLY: That’s right. So, the State Department, under — again, federal law, an act of Congress, requires the State Department to produce a record of American foreign relations. And they have been doing this since the Civil War. So, for more than 150 years, State Department historians, who are professionally trained, highly competent and completely responsible, have been trying to give the rest of us a record of what the government does in our name. Sometimes these — and typically, these volumes, they come out 30, 40, sometimes even 50 years after the fact, because it takes that long to get the CIA and the Pentagon and the others to allow these documents to be released. But what’s happened in most recent years is that the Pentagon has blocked the State Department from allowing the release of Pentagon documents, hundreds of these documents. These documents date all the way back to the 1970s and '80s, and they're claiming that even now it’s dangerous to release them to the public.

AMY GOODMAN: So, give us your final thoughts — we have 20 seconds — around what people can do. What can historians can do?

MATTHEW CONNELLY: So, a lot of what’s happening at the National Archives is happening because they are being starved of resources. They have a smaller budget now than they had back in 2008. That budget has been cut every year for the last three years. So, if you actually care about having a court of history that can render some judgment about what’s happening in our time, then you have to let your congressmen and your senators know that you care about the past and you want to preserve it.

AMY GOODMAN: Do you think the National Archives will even keep information about President Trump being impeached?

MATTHEW CONNELLY: You know, I think that the people there want to do the right thing. They just need our help in doing it.

AMY GOODMAN: Well, we want to thank you, Matthew Connelly, professor of history at Columbia University, principal investigator at the History Lab. And we’ll link to your piece, “Why You May Never Learn the Truth About ICE.”

Democracy Now! produces a daily, global, independent news hour hosted by award-winning journalists Amy Goodman and Juan González. Our reporting includes breaking daily news headlines and in-depth interviews with people on the front lines of the world’s most pressing issues. On Democracy Now!, you’ll hear a diversity of voices speaking for themselves, providing a unique and sometimes provocative perspective on global events.

Democracy Now! is broadcast daily across the United States and Canada as well as in countries around the world. Our program is on Pacifica, NPR, community, college and satellite radio stations; on PBS, public, community and satellite TV; and viewed by millions of people online each day. Our headlines are broadcast in Spanish on radio stations across the U.S., Central and South America, and in Europe.

Democracy Now! launched in 1996, airing on nine radio stations. More than two decades later, we have grown to be one of the leading U.S.-based independent daily news broadcasts in the world.

As an independent news program, Democracy Now! is audience-supported, which means that our editorial independence is never compromised by corporate or government interests. Since our founding in 1996, Democracy Now! has held steadfast to our policy of not accepting government funding, corporate sponsorship, underwriting or advertising revenue.