Workers counting on Trump to deliver a “great American comeback” have been left waiting at the station. 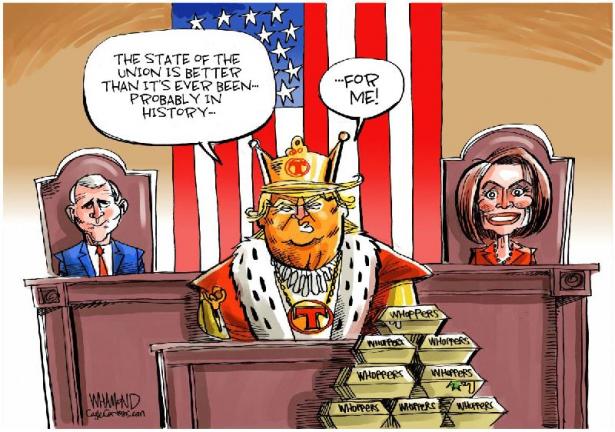 State of the Union, Dave Whammond

In his State of the Union address tonight, President Trump plans to extol the “blue-collar boom” in the economy along with his purported “great American comeback.” He’ll claim this based on two recent signature trade deals—the United States-Mexico-Canada Agreement (USMCA) and a “phase one” deal with China. Unfortunately, both agreements will likely to lead to more outsourcing and job loss for U.S. workers, and the facts just don’t support Trump’s claims about the broader economy.

Trump comes from a world that has ardently championed globalization, like many of his predecessors. However, that approach has decimated U.S. manufacturing over the past 20 years, eliminating nearly 5 million good factory jobs as shown in Figure A, below. Nearly 90,000 U.S. factories have been lost as well.

Trump has not brought these jobs back, nor will his present policies change the status quo. Globalization, and China trade in particular, have also hurt countless communities throughout the country, especially in the upper Midwest, mid-Atlantic, and Northeast regions. The nation has lost a generation of skilled manufacturing workers, many of whom have dropped out of the labor force and never returned. All of this globalized trade has reduced the wages of roughly 100 million Americans, all non-college educated workers, by roughly $2,000 per year.

In addition, more than half of the U.S. manufacturing jobs lost in the past two decades were due to the growing trade deficit with China, which eliminated 3.7 million U.S. jobs, including 2.8 million manufacturing jobs, between 2001 and 2018. In fact, the United States lost 700,000 jobs to China in the first two years of the Trump administration, as shown in our recent report. The phase one trade deal will not bring those jobs back, either.

In the State of the Union, Trump will claim that he has created a “great American comeback” and generated a “blue-collar boom” with strong wage gains for lower-income workers. As shown in Figure B, below, globalization has generated huge wage gains for those in the top 20% and especially those in the top 10%, top 1%, and top 0.1% of the income distribution. Average wages for the top 20% increased $15 per hour (33.4%) over the past two decades. Wage gains for the bottom 80% ranged from $1.39 to $2.46 per hour (13.5% to 16.4%).

Donald Trump has failed to reverse these trends, and in many ways, has made them worse. In the past three years, the vast majority of wage gains have gone to workers in the top 20%, continuing the inequality that has been well-established in the era of globalization as shown in Figure C, below. Over the past three years, workers in the top 20% enjoyed average real wage gains of $2.61 per hour, five times the gains of workers in the bottom quintile and nearly 3.5 times the gains enjoyed in the middle 60%.

Wage gains were significantly larger for workers in the bottom 20% than they were for middle-class workers, due largely to measures such as higher minimum wages that took effect in 13 states and the District of Columbia in 2018 and 19 states in January 2019. These are policies that were implemented by state legislatures and local governments around the country to help offset the effects of a decline in the real value of the federal minimum wage. They also helped offset the negative effects of dozens of efforts by the Trump Labor Department to weaken labor standards, attack worker rights, and roll back wages.

Globalization has reduced wages for working Americans by putting non-college educated workers into a competitive race to the bottom in wages, benefits, and working conditions with low-wage workers in Mexico, China, and other low-pay, rapidly industrializing countries. The Trump administration’s two trade deals don’t change that reality. Workers counting on Trump to deliver a “great American comeback” have been left waiting at the station.

Robert E. Scott joined the Economic Policy Institute in 1997 and is currently director of trade and manufacturing policy research. His areas of research include international economics, the impacts of trade and manufacturing policies on working people in the United States and other countries, the economic impacts of foreign investment, and the macroeconomic effects of trade and capital flows and exchange rates. He has published widely in academic journals and the popular press, including in the Journal of Policy Analysis and Management, the International Review of Applied Economics, and the Stanford Law and Policy Review,  the Detroit News, the New York Times, Los Angeles Times, Newsday, USA Today, The Baltimore Sun, The Washington Times, The Hill, and other newspapers. He has also provided economic commentary for a range of electronic media, including NPR, CNN, Bloomberg, and the BBC. He has a Ph.D. in economics from the University of California at Berkeley.

Join with us to build an economy that works for everyone

We need your help in order to continue our work on behalf of hard-working Americans. Our donors value our high-quality research, reputation for truth-telling, and practical policy solutions. Your tax-deductible gift to EPI makes you an important partner in providing this critical public service.