Workers are dissatisfied with wage growth . 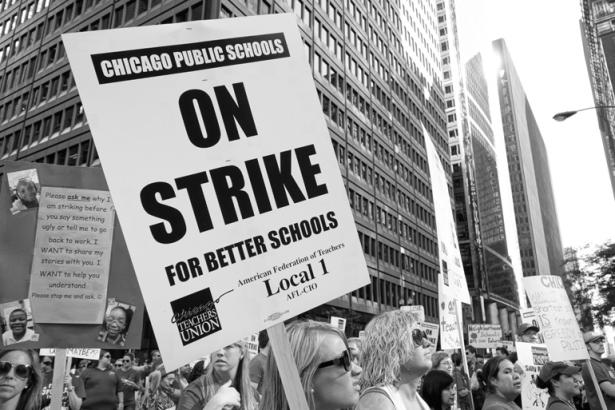 From teachers in North Carolina to hospital workers in California, and from autoworkers in Michigan to grocery store cashiers in Boston, workers across the United States have participated in a resurgence in major work stoppages in the last two years. By far the most common form of work stoppage is a strike, which is when workers withhold their labor from their employer for a period of time during a labor dispute. By withholding their labor—labor that employers depend on to produce goods and provide services—workers are able to counteract the inherent power imbalance between themselves and their employer. In this way, strikes provide critical leverage to workers when bargaining with their employer over fair pay and working conditions or when their employer violates labor law.

In this brief, we cover the basics of strikes—who has the legal right to strike and when—and what policies to strengthen the right to strike are under consideration. We also analyze new data on major work stoppages from the Bureau of Labor Statistics (BLS) showing that after decades of a downward trend, there has been an upsurge in strike activity in the last two years.1

At first blush, it may seem odd that the United States is seeing a resurgence in strike activity when the unemployment rate is below 4%. The increased activity likely stems from two factors. First, workers know that if they are fired or otherwise pushed out of their jobs for participating in a strike (which is illegal but common behavior among employers), they are more likely to be able to find another job. Second—and perhaps even more important—working people are not seeing the robust wage growth that one might expect with such a low unemployment rate, and inequality continues to grow. The increase in strike activity suggests that working people are concluding that if even a sub-4% unemployment rate 10 years into an economic recovery is not providing enough leverage to generate truly robust wage growth, workers must join together to demand a fair share of the recovery.

Who has the legal right to strike?

In general, there are two types of strikes: economic strikes and unfair labor practice strikes. In an economic strike, workers withhold their labor as leverage when bargaining for better pay and working conditions. While workers in economics strikes retain their status as employees and cannot be discharged, their employer has the right to permanently replace them.3 At the conclusion of an economic strike, replaced workers are not automatically reinstated in their old jobs, but they have priority to apply for any future job openings. In other words, while workers have the legal right to participate in an economic strike—and remain employees while on strike—current law makes participation risky because workers might be out of a job when the strike concludes.

While Section 7 of the NLRA provides workers the right to strike, not all strikes are lawful. Under Section 8(b)(4) of the Act, it is currently unlawful for workers to be involved in “secondary” strikes, which are strikes aimed at an employer other than the primary employer (for example, when workers from one company strike in solidary with another company’s workers). If a strike is deemed an “intermittent strike”—when workers strike on-and-off over a period of time—it is not protected as a lawful strike by the NLRA. In general, a strike is also unlawful if the collective bargaining agreement between a union and the employer is in effect and has a “no-strike, no-lockout” clause. 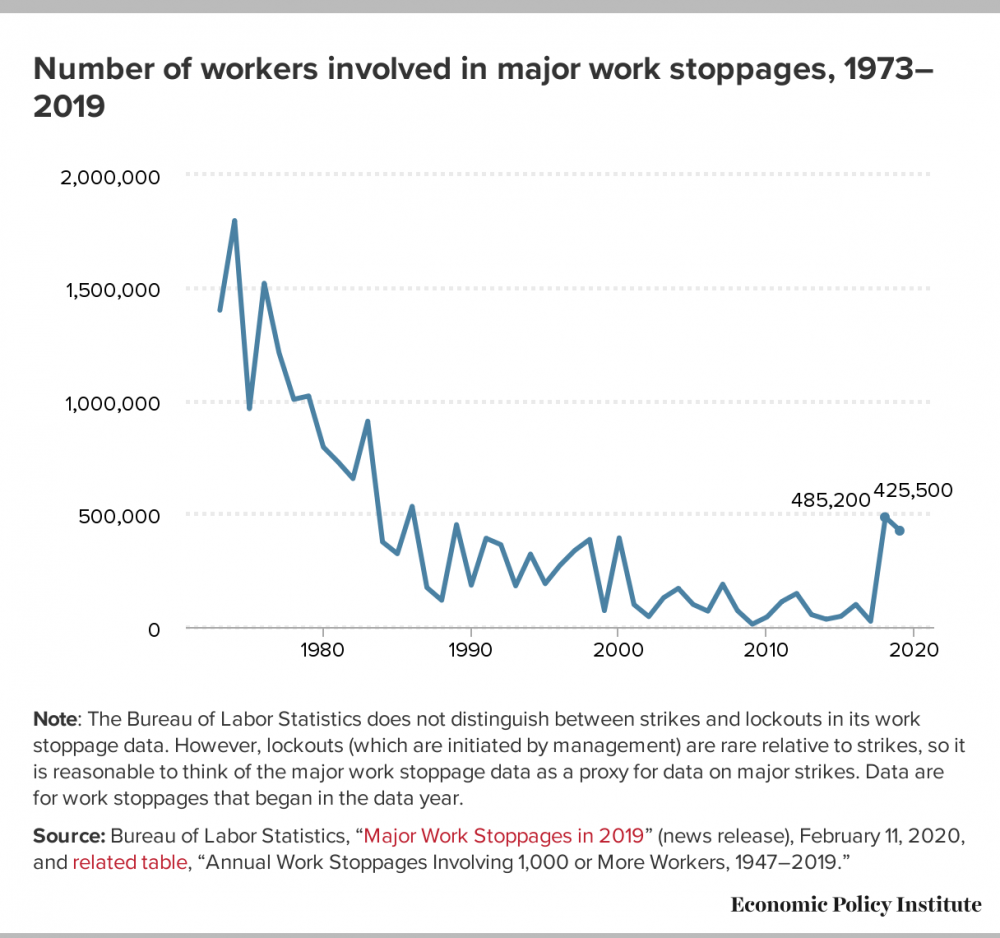 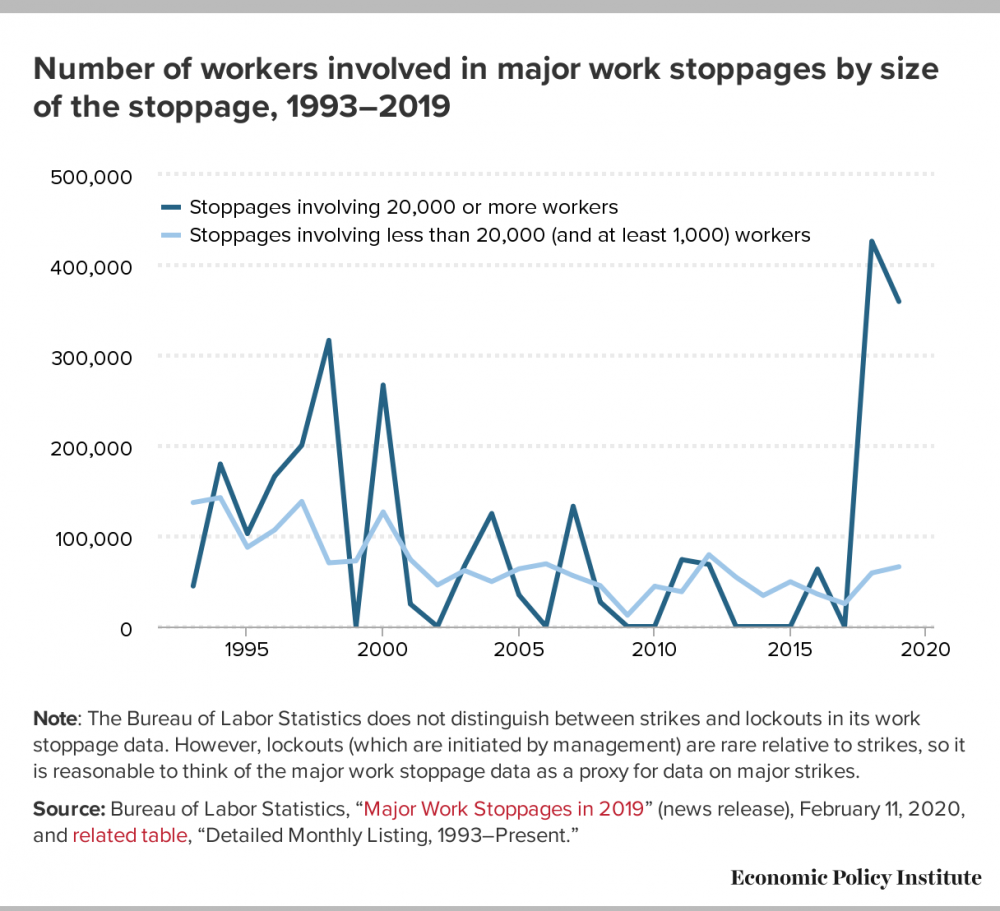 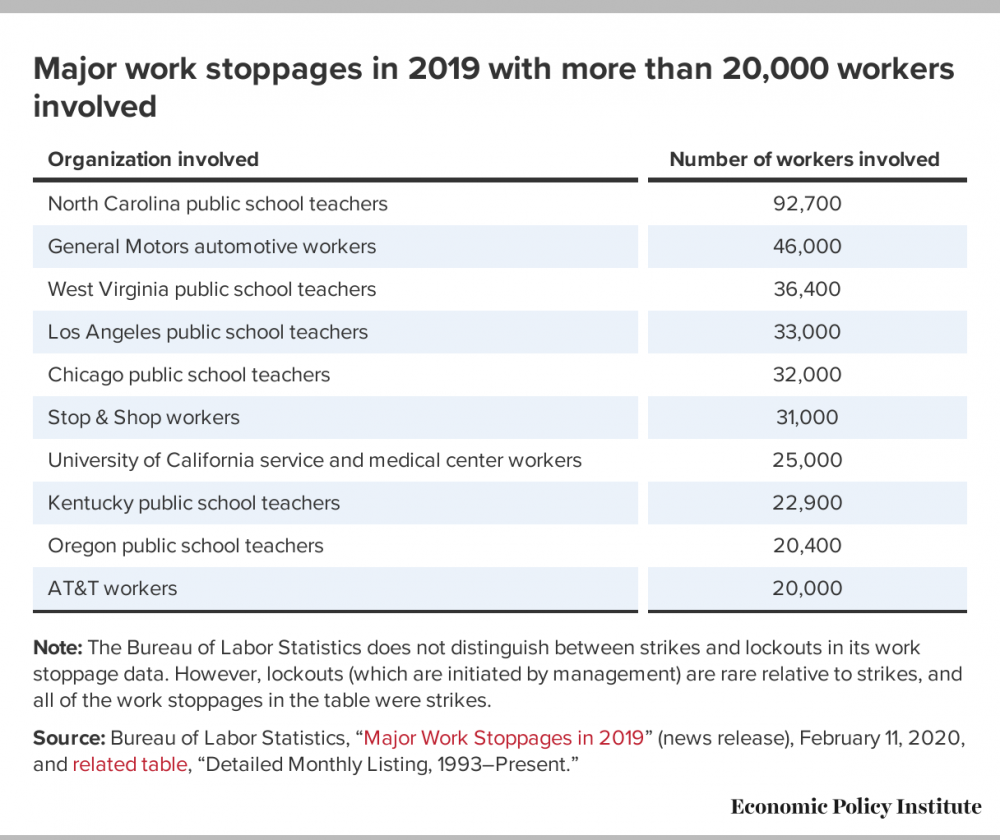 Limitations of the BLS data on work stoppages

The BLS data on work stoppages, while useful, have a major limitation—the data include only information on work stoppages involving 1,000 or more workers that last at least one full shift. There is an enormous amount of information that is missed by restricting the data to work stoppages involving at least 1,000 workers, as evident in BLS data on firm size: according to the BLS, nearly three-fifths (59.4%) of private-sector workers are employed by firms with fewer than 1,000 employees.10 Restricting the tracking to actions that last at least one full shift also misses important work stoppages. For example, the data do not include the 2018 Google walkouts in protest of the company’s handling of sexual harassment, because even though the walkouts involved thousands of workers, they did not last for one full shift.11 Unfortunately, comprehensive data on work stoppages that involve fewer than 1,000 workers, or that last less than one full shift, are not readily available from BLS or other sources. Thus, there is a large gap in knowledge about the true extent of, and trends in, strike and lockout activity.

In February 2018, teachers went on a statewide strike in West Virginia to demand just wages and better teaching and learning conditions. For nine days, schools across the state were closed as teachers, students, and community supporters protested at the state capital against the state government’s chronic underfunding of public education and the impact on the teachers and students. After a week and a half on strike, the West Virginia teachers received a pay increase. They also sparked a movement that prompted public school teachers in other states to strike in support for better pay and working conditions.12

Consequently, the largest work stoppages by number of workers during 2018 and 2019 were in elementary and secondary schools in states such as Arizona, Colorado, Kentucky, North Carolina, and West Virginia.13 Community support, such as students and parents protesting in solidarity at schools and state capitals, made it possible for hundreds of thousands of teachers to strike in an effort to improve their pay and working conditions.

In the early hours of September 16, 2019, nearly 50,000 workers walked out of General Motors (GM) factories across the nation and went on strike. The action followed GM’s decision to close multiple U.S.-based factories and move jobs abroad, even after the company received millions in corporate tax cuts.14 GM workers went on strike to preserve job security, improve wages, and retain health care benefits. The GM strike was the longest major work stoppage in 2019, with over 1.3 million days idle.15 The strike was also the first GM strike in over a decade.

The six week strike concluded with the United Auto Workers and GM agreeing to a four-year contract that improved wages, sustained health care costs for workers at existing levels, created a transition process for temporary workers to become permanent employees, and committed to making investments in American factories.16 In addition to improving the pay and working conditions of GM workers, the final contract will serve as a template for UAW’s contracts with Ford and Chrysler, creating a set of standards in the automotive industry.17

Another notable major work stoppages of 2019 was the Stop & Shop strike. More than 30,000 workers at the New England-based grocery chain went on strike after negotiations over new contracts stalled for three months. During those negotiations, Stop & Shop had offered workers across-the-board pay increases but also proposed increasing the cost of health care, ultimately negating the pay raises. The workers argued that Stop & Shop could offer better compensation than it did because the company reported profits of more than $2 billion in 2018.18 As a result of the impasse, workers in over 240 locations went on strike for better pay and benefits during the week of Easter.

The Stop & Shop strike was the second largest private industry work stoppage in 2019, with over 215,000 days idle. The 11 day strike concluded with the United Food and Commercial Workers and Stop & Shop agreeing to a three-year contract that preserved health care benefits, increased wages, and maintained time-and-a-half pay on Sunday for current employees.19

Policies to strengthen the right to strike

The resurgence is in strike activity is occurring despite current policy that makes it difficult for many workers to effectively engage in their fundamental right to strike.

The Protecting the Right to Organize (PRO) Act includes critical reforms that would strengthen workers’ right to strike. The PRO Act would expand the scope for strikes by eliminating the prohibition on secondary strikes and by allowing the use of intermittent strikes. It would also strengthen workers’ ability to strike by prohibiting employers from permanently replacing striking workers. Further, the PRO Act would strengthen undocumented workers’ right to strike by overturning the Supreme Court’s decision in Hoffman Plastic Compounds v. NLRB, which held that undocumented workers are not entitled to reinstatement or back pay if their employer violated their workplace rights. The PRO Act passed the House of Representatives February 6, 2020, but is unlikely to advance in the Senate in the near future.

In addition to the crucial reforms found in the PRO Act, there are additional solutions under discussion that would strengthen the right to strike, including extending unemployment benefits to striking workers, creating tax-deductible strike funds to make it easier for unions to sustain long-term strikes, and forming digital picket lines to inform consumers of real-life collective actions during online interactions with the workers’ employer.20 All of these policies, and those of the PRO Act, are part of an important effort to bring U.S. labor law into the 21st century.

The unemployment rate averaged 3.8% in 2018 and 2019, its lowest level in 50 years. At first blush, it may seem odd that the U.S. is seeing a resurgence in strike activity at a time like this. The increased activity likely stems from two factors. First, workers know that if they are fired or otherwise pushed out of their job for participating in a strike (which is illegal but common), they are more likely to be able to find another job. Second and perhaps even more important, working people are not seeing the robust wage growth that one might expect with such a low unemployment rate, and wage levels for working people remain low, with many families struggling to make ends meet. The wage of the median worker is about $19 per hour, which translates to about $40,000 per year for a full-time, full-year worker, a level that suggests that the U.S. economy is not delivering for many working people.21 Further, inequality continues to rise, as the people who already have the most see strong gains.22 The increase in strike activity suggests that more and more, working people are concluding that if even a sub-4% unemployment rate 10 years into an economic recovery is not providing enough leverage to meaningfully boost their wages, they must join together to demand a fair share of this recovery.

3. In NLRB v. Mackay Radio & Telegraph Co., the U.S. Supreme Court ruled that employers can permanently replace striking workers in order to keep their business running during a work stoppage.

6. Another thing that has evolved is the fact that employment of wage and salary workers has grown substantially, from 87.1 million in 1979 to 141.7 million in 2019. (See Union Stats, “Union Membership, Coverage, Density, and Employment Among All Wage and Salary Workers, 1973–2018” (web page), accessed February 7, 2020.) This means the share of workers involved in a major work stoppage has declined more rapidly than the raw levels have declined over this period (again, the surge in the 2018 and 2019 period notwithstanding).