labor North Carolina Workers Are Fed Up With the State’s $7.25 Minimum Wage

People are dying from poverty wages in the richest country in the world,” she said. “The question before us is not can we afford to pay workers more. The question is can we afford not to? Raising the wage to $15 would save lives.” 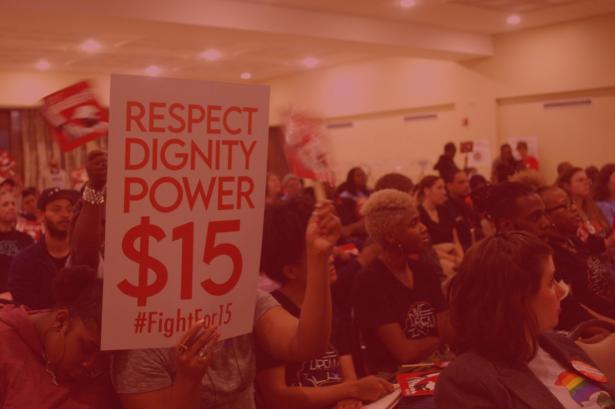 , Graphic via NC Raise Up / Courier

In 2019, Democratic lawmakers introduced at least seven bills to raise the state's minimu wage, but not a single one received a committee hearing, let alone a vote, in the Republican-controlled legislature.

Keenan Harton first started working in fast food when he was 15 years old. Decades have passed since then, and Harton, a resident of Durham, North Carolina, is now engaged with four children and one grandchild.

Harton, 46, is also still a fast food worker who juggles three jobs and works seven days a week in order to make ends meet. The $8 per hour wage Harton earns working at Biscuitville, a regional fast-food chain, is not enough to provide for him and his family.

“I work seven days a week. I have to. I have to take care of my family,” Harton said on Thursday.

Harton was one of several workers who shared their stories during a hearing at the First Baptist Church in Raleigh, calling on the state to raise its minimum hourly wage from $7.25 to $15. The event, organized by Raising Wages NC and Fight for $15, also included testimonials and speeches from union members, clergy, and community leaders who spoke directly to a panel of state lawmakers and candidates for statewide office.

“For far too long, too many of us have been working too hard for too little. No one can survive on $7.25,” said MaryBe McMillan, president of the North Carolina State AFL-CIO. “Working yet living in poverty is an epidemic that threatens the health of our economy and the lives of millions.”

Currently, the annual salary of a North Carolina resident who earns the minimum hourly rate and works eight hours a day, five days a week, every week for a year is $15,080. That is a poverty-level wage for anyone with a spouse, partner, or children. In fact, more than two million North Carolinians—or nearly 1 in 3 workers—are paid poverty wages, the second worst ranking in the nation, according to the North Carolina Justice Center.

Fight for $15 has advocated for a higher minimum wage across the country. Twenty-one states raised their rate in January, but North Carolina was not one of them. The state’s minimum wage—which is in line with the federal minimum wage—has not increased since 2009.

North Carolina Democrats introduced at least seven bills last year to raise the state’s minimum wage, but not a single one received a committee hearing, let alone a vote, in the Republican-controlled legislature.

Advocates have argued that raising the minimum wage would not only provide more financial security, but also improve workers’ mental and physical health, and even save lives.

Wanda Coker, 53, has worked at Burger King for the last 20 years, and it took her every one of those years to earn the $15.14 per hour wage she now makes as the Assistant General Manager of a store in Raleigh. But two decades of poverty-level pay have had a substantial impact on Coker’s life.

"t was nowhere near where it needed to be,” Coker told COURIER in a phone interview. “When I was raising my daughter, both of us needed medication and because I didn’t have enough money, I chose on several occasions to get her medication instead of mine.”

The long-term consequences have been devastating for Coker. “I’m in kidney failure, I’ve got diabetes, high blood pressure, and the medications that I have to pay for now are just costly,” she said.

Coker, who is on dialysis, also shared her story at Thursday’s rally, underscoring just how serious the issue was for her.

“I’ve worked through a complicated pregnancy, diabetes, and stage 5 kidney failure. I’m right now in need of a kidney transplant that would cost hundreds of thousands of dollars,” Coker said. “But instead of receiving a paycheck I can live on, health benefits, or paid sick days, my reward is a pile of medical bills that I can’t afford to pay.”

“People are dying because they can’t afford medicine and health care, because they’re so desperate they’re reaching a breaking point and committing suicide. People are dying from poverty wages in the richest country in the world,” she said. “The question before us is not can we afford to pay workers more. The question is can we afford not to? Raising the wage to $15 would save lives.”

Advocates also point to studies showing that minimum wage increases have been associated with fewer cases of child neglect, lower rates of recidivism among formerly incarcerated invidividuals, and a decrease in the suicide rate for those with a high school education or less.

Republicans in North Carolina said last year that they believed the “free-market system” should dictate wages for private-sector employers, citing concerns that raising the minimum wage could lead to job losses—an oft-repeated conservative talking point that has been largely debunked by recent research.

Another common argument from opponents of legislation to increase minimum wage is that it would raise costs for everyone. Coker rejected that argument outright. “It is not going to affect them. The biggest misconception is that ‘oh, if we raise the minimum wage, then they’re just going to raise everything else,’” she told COURIER. “Well, they’ve been raising everything else … but they haven’t raised the minimum wage.”

Indeed, while the cost of living has increased, wages have remained largely stagnant for most American workers. As of 2018, the $7.25 per hour federal minimum wage was worth 14.8% less than when it was last raised in 2009, after adjusting for inflation, and 28.6% less than its value in 1968, according to the nonprofit, nonpartisan Economic Policy Institute.

In short, Americans are having to do more with less, and Harton’s had enough of that.

“The Fight for $15 has helped win minimum wage increases in 21 states. North Carolina needs to be next,” Harton said on Thursday night. “The South is still stuck at the federal minimum wage of $7.25. Southern workers are getting left behind. It’s time to change that.”

Keya Vakil is a reporter at COURIER, where he covers healthcare, education, the economy, and the occasional story about millennials. Prior to joining Courier Newsroom, Keya worked as a researcher in the film industry and dabbled in the political world.

COURIER is owned and operated by Courier Newsroom, a progressive media company owned by the non-profit ACRONYM. Facts and first-hand sources are our north star, and we work to expose misinformation in all its forms. We believe the key to a strong democracy is an informed electorate and that the decline of local news around the country has negatively impacted civic engagement. We are investing in local journalism and storytelling that is thoughtful, informative, and relevant.