books A Theory of Jerks, and Love

In his review of Eric Schwitzgebel's A Theory of Jerks and Other Philosophical Misadventures, Scott McLemee also focuses on love. 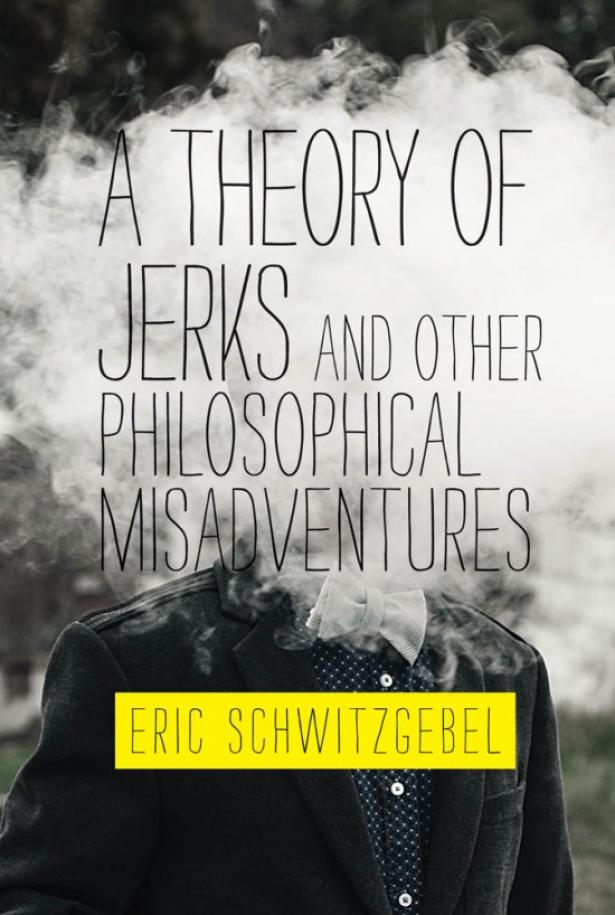 Its suitability may not be obvious from the title, but Eric Schwitzgebel's A Theory of Jerks and Other Philosophical Misadventures (MIT Press) proves surprisingly appropriate for discussion on Valentine's Day. It has things to say about love that ring true, although their connection to the theory of jerks will require some clarification.

The book consists of not quite 60 short essays, each between one and 10 pages long. A few are excerpts from academic papers; several are off-the-cuff in ways almost unthinkable (and certainly unpublishable) before the advent of blogging. They are arranged into more or less thematic sections.

But the author, a professor of philosophy at the University of California, Riverside, encourages readers to disregard the arrangement entirely, if so inclined. The tone is light, but the range of concerns includes metaphysics, philosophy of consciousness, artificial intelligence, deathbed regrets, the psychology of decision making and rationalization, statistical evidence regarding careerism among philosophers in the Third Reich, and whether or not professional ethicists behave more ethically than the rest of us. (If not, why not? What would be the excuse?) Schwitzgebel makes no claim to some deeper unity. The pieces cross-connect in various ways, but you still get to choose your own misadventure.

Two topics will be the focus here: jerks and love. They may look random; you might find them all too closely related. Here goes.

The essay lending Schwitzgebel's collection its title recalls Aaron James's groundbreaking Assholes: A Theory, which drew particular attention during the last presidential election cycle. Both, in turn, follow in the footsteps of Harry Frankfurt's On Bullshit, taken up here 15 years ago almost to the day. In each case, we find the author giving a twist to old-school ordinary-language philosophy by inspecting a vernacular (in fact, coarse) expression to find its implicit concept.

Per Schwitzgebel's refinement of the term, "jerkitude" is a moral failure presenting itself as a social nuisance. The failure is both emotional and intellectual. "The jerk," he writes, "culpably fails to appreciate the perspectives of others around him, treating them as tools to be manipulated or fools to be dealt with rather than as moral and epistemic peers." The author's reference to "the perspectives of others" applies to both their feelings and their intellectual capacities. The jerk is often bewildered to discover that he is surrounded by idiots. They reveal themselves as such by failing, or refusing, to do what he expects -- even though that is clearly their obligation, a point he may well emphasize in the bluntest possible terms.

In everyday use, "jerk" and "asshole" tend to be almost synonymous, though the latter may connote a higher degree of obnoxiousness. But as our philosophers parse the terms, a significant difference bears noting. The jerk, to quote Schwitzgebel again, "can't appreciate how he may be wrong and others right about some matter of fact, and what other people want or value doesn't register as of interest to him, except derivatively upon his own ignorance." The asshole, as depicted by Aaron James, is, by contrast, quite aware of others' feelings and opinions but makes a point of disregarding them. Think of someone getting into an elevator, lighting a cigar and smoking it with the hint of a sneer as other passengers cough.

The jerk in Schwitzgebel's model is entitled but oblivious. Where the asshole's actions may aggressive, defiant and contemptuous to the point of being tinged with sadism, the jerk is self-centered while lacking much self-awareness. The latter requires a capacity to imagine one's behavior and attitude from the standpoint of those affected. It helps as well to be as generous in assessing other people's motives and circumstances as in rationalizing one's own. The encouraging word here is that a jerk can reform. An interesting question, requiring further study, concerns which comes first: Regret or maturity?

Few people's romantic lives do not involve at least a jerk or two along the way. Often this can be laughed off as a learning experience. Not always, though. At times, the jerk is in the mirror; honesty may require an even harsher judgment than that.

But the regrets can still be redeemed, against all odds, with a stroke of good fortune. "Falling in love" is the easy part; it's the follow-through that requires the most attention. "Rather than a feeling," Schwitzgebel says in a text written for the wedding of two friends, "love is a way of structuring your values, goals and reactions … Only if this restructuring is so rooted that it automatically informs our reactions to the person and to news that could affect them, do we possess real love."

Even "real love," so understood, can be carried another step forward, as suggested by the title of the essay: "Thoughts on Conjugal Love." The author invokes "an implacable, automatic commitment to responding to all major life events through the mutual lens of marriage." The expectation of permanence is implied: "Each partner's commitment is possible, despite the contingency of conjugal love, because each partner trusts that the other partner's commitment is unshakeable."

In this society, at this point in history, permanence is not obligatory. But neither is it impossible. "One's life becomes a coauthored work," says Schwitzgebel -- a line I bring to the attention of one reader in particular, to celebrate this holiday for our ​27th time.

Book Author Eric Schwitzgebel is Professor of Philosophy at the University of California, Riverside, and the author of Perplexities of Consciousness (MIT Press). His essays on philosophical topics have appeared in a range of publications and on his blog, The Splintered Mind.

[Essayist Scott McLemee writes the weekly Intellectual Affairs column for Inside Higher Ed. His reviews, essays and interviews have appeared in The New York Times, The Washington Post, The Boston Globe, The Nation, Newsday, Bookforum, The Common Review, and numerous other publications.]