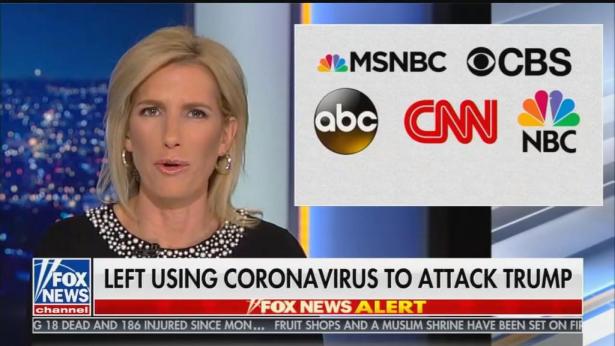 Public health officials are struggling to contain the novel coronavirus COVID-19, which has now spread to at least 47 countries. The Centers for Disease Control is warning that it expects to see an expanded outbreak in the United States and is planning for a worldwide pandemic. In addition to the substantial health risks posed by the disease, the interconnected nature of global supply chains means that the epidemic could spur an economic crisis. Careful leadership is needed from the president of the United States, who must manage a complex interagency and international process, mustering the nation’s resources and expertise to limit the damage.

But at this delicate moment, the feedback loop between Fox News and President Donald Trump is powering the president’s response. The network hosts who influence Trump the most are fixating his attention on Democrats and the media, who they claim are deliberately politicizing coronavirus in order to damage his reelection campaign. And Trump is apparently listening to them and is spouting the same talking points.

Trump is ignorant, incompetent, and generally uninterested in the aspects of his job that don’t involve promoting his narrow personal interests. His response to coronavirus has not diverged from this baseline. He spent the last few years systematically dismantling U.S. pandemic response capabilities, dissolving the National Security Council’s global health security unit and slashing funding to the CDC’s global health section. And since the coronavirus outbreak began, Trump has been largely detached from managing the government’s response.

Trump’s Fox propagandists spent the early weeks of the outbreak praising his purported success at “constraining” its spread. But after stocks fell dramatically on Monday and Tuesday amid fears of a global pandemic, they needed a new angle. And so Fox personalities began lashing out at journalists for their coverage of coronavirus and at Democrats for their criticism of the administration.

“Sadly, the left is already, yup, politicizing tragedy,” host and close Trump ally Sean Hannity said on Tuesday night, hammering Senate Democrats for saying that the administration had sought too little funding to deal with the mounting crisis.

“Watching the media coverage today, it seemed like some of the Trump haters were actually relishing in this moment,” Laura Ingraham said on her show the following hour. “A new avenue it was, coronavirus, that is a new pathway for hitting President Trump. How sick that these people seem almost happiest when Americans are hurting.”

“It is absolutely disgusting that Democrats are seeking to use this complex virus to score cheap political points,” she added.

Trump was apparently watching -- he tweeted a quote from a different segment of the same Ingraham broadcast -- and taking notes. On Wednesday morning, he went after the media and Democrats on Twitter.

Low Ratings Fake News MSDNC (Comcast) & @CNN are doing everything possible to make the Caronavirus look as bad as possible, including panicking markets, if possible. Likewise their incompetent Do Nothing Democrat comrades are all talk, no action. USA in great shape! @CDCgov.....

Trump lavished praise on himself and his administration while attacking congressional Democratic leaders for criticizing the response during a press conference on the coronavirus outbreak that night.

Fox got the message. Its hosts and personalities targeted the media and Democrats for their treatment of coronavirus throughout Wednesday night and Thursday morning.

President Trump's Fox propagandists are focusing him on the real danger from coronavirus: Democrats and journalists politicizing it in order to damage his re-election campaign. pic.twitter.com/PCf69JJdjk

This is dangerous. The hours of Fox coverage Trump watches each day shape his worldview -- and direct his often inchoate rage. The potential global crisis on his doorstep does not appear to be slowing his consumption of propagandistic cable news content. As we’ve seen so many times before, he is getting distracted by his television, which is encouraging him to carry out his worst impulses.

The attacks on the press, long a staple of Trump and Fox, are particularly concerning now. The American public needs trustworthy information about the coronavirus outbreak in order to make good decisions about how to respond to it. And the president is telling people that they can’t trust news outlets that aren’t in the tank for his administration, warning that those journalists will deliberately overstate the danger in order to hurt his reelection chances. That’s a recipe for disaster.

And things can still get worse. Some pro-Trump commentators, including conservative radio host Rush Limbaugh, have argued that the top CDC official who warned that a larger U.S. outbreak was inevitable is a deep-state plant who is trying to take down Trump. Fox hosts have largely steered clear of those conspiracy theories thus far. But what happens if the situation worsens, and the Fox Cabinet starts telling the president that he needs to purge the public health bureaucracy of anti-Trump traitors?

Matt Gertz is a senior fellow at Media Matters, which he joined in 2007. His work focuses on the relationship between Fox News and the Trump administration, news coverage of politics and elections, and media ethics. Matt's writing on the Trump-Fox feedback loop has appeared in The Daily Beast, HuffPost, and Politico Magazine, and he has discussed his analysis on MSNBC, NPR, and Comedy Central. He holds a bachelor's degree in political science from Columbia University. Matt is married to Washington Post opinion writer Alyssa Rosenberg.