The US - Taliban Deal 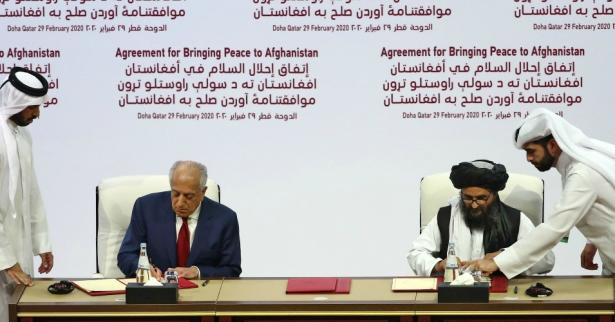 While President Donald Trump bragged Saturday about an agreement signed by the U.S. government and the Taliban as a milestone towards ending the war in Afghanistan that has raged now for the nearly two decades—devastating the Afghan people and the wider region—Rep. Barbara Lee, one of the staunchest anti-war voices in Congress, denounced the deal as a little more than a sham.

"After nearly two decades of endless war, it's become clear that there is no military solution to the conflict in Afghanistan," Lee said in a statement. "But this so-called ‪'peace deal' is anything but."

At a signing ceremony in Doha on Saturday, U.S. secretary of state Mike Pompeo and Taliban deputy leader Mullah Baradar took turns to address a crowd of senior dignitaries. Although the deal was signed by the US peace envoy Zalmay Khalilzad, it was the first time a U.S. cabinet member had met members of the insurgency.

The Taliban have agreed to sever ties with al-Qaida and other international terror groups and sit down for peace talks with other Afghans, including a government they have always denounced as a US puppet. In return, Washington will start a phased withdrawal of troops.

Troop levels will be cut to 8,600 over the next 135 days and five bases will be closed. If both sides keep to their commitments, all U.S. military forces could leave Afghanistan by spring 2021, although Washington is thought to want to keep intelligence operatives on the ground fighting Isis and al-Qaida.

According to Lee, nobody should be fooled into thinking that this is a "peace" agreement.

"It leaves thousands of troops in Afghanistan and lacks the critical investments in peacebuilding, human-centered development, or governance reform needed to rebuild Afghan society," the Congresswoman said.

As peace advocates have been saying since even before the U.S. invasion took place in 2001, following the attacks of September 11, there was never a military solution to the situation in Afghanistan. That remains true today.

“America’s fantasies of what it could achieve in the war, even after it became a Washington cliché that the war had no military solution, consigned thousands to needless deaths.” https://t.co/AVuHpnOxNP

"Two decades of trying to bomb our way to peace have made clear: there is no U.S. military solution in Afghanistan," said Stephen Miles, executive director of Win Without War, in a statement.

While the reduction in U.S. military presence "is a welcome step," Stephens said, the agreement "utterly fails to confront the underlying logic of military occupation, lacks any strategy for long-term peace, and falls far short of accountability and justice. It is no 'peace deal.'"

Like Lee, Stephens said a deal that leaves nearly two-thirds of current U.S. forces in Afghanistan for 'counterterrorism' purposes—"bringing levels down to about where they were when Trump entered office"—cannot be considered a peace deal. While the drawdown can be considered a positive development, he said, the agreement "is far from an end to endless war—and further still from anything that would ensure stability, peace, and justice after decades of violence."

Vijay Prashad, foreign policy expert and director of the Tricontinental Institute for Social Research, put the absurdity of the situation this way:

United States went to war against the Taliban, and then almost two decades later, handed Afghanistan back to the Taliban.

And the anti-war veterans groups About Face tweeted:

On the peace agreement signed, as others have said, it’s essentially the identical position by the Taliban going all the way back to ‘09. Withdrawal troops in exchange for not hosting terrorist groups. 11 yrs later, no significant change, only TRILLIONS of $$$, COUNTLESS DEAD.

Lee called the agreement "a step forward as we work to stop endless war," but said it remains critical to recognize that "there's still a long way to go," including the repeal of two Authorizations for Use of Military Force—one from 2001 and another from 2020—under which U.S. overseas war and military operations continue in Afghanistan, Iraq, Syria, Iran, Somalia, Libya, Yemen, and elsewhere continue to be waged.

Members of Congress, said Lee, must "reassert our Constitutional duty over war and peace."