The Political Elite vs Bernie

Bernie Sanders stands alone now, save for his grassroots army, and facing him are the politically elite of the Democratic Party, both black and white, Wall Street, and the corporate media 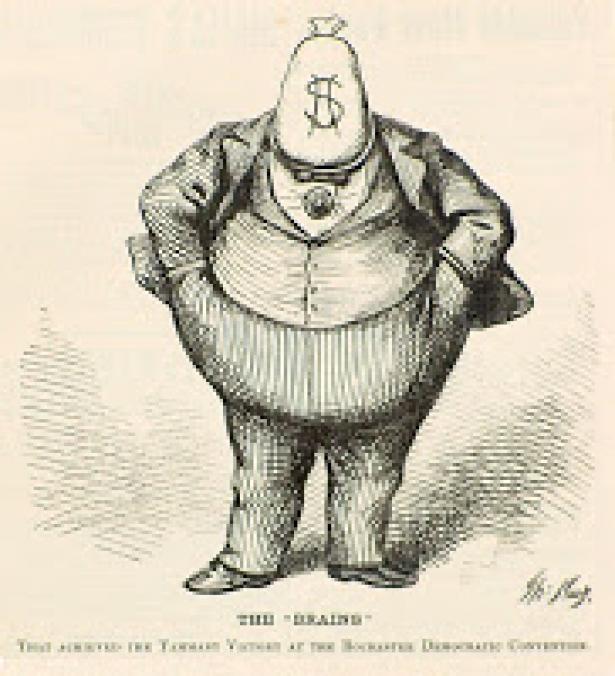 Political cartoonist Thomas Nast's 1871 depiction of New York City's Boss Tweed, an inspiration for today's elite political class,
Back at the beginning of the 20th century, muckraking journalist Charles Edward Russell noticed how U.S. senators, as a political class, all seemed to look alike.
“Well-fed and portly gentlemen, almost nobody in that chamber had any other reason to be there than his skill in valeting for some powerful interest,” Russell observed. “We had no Senate; we had only a chamber of butlers for industrialists and financiers.”
Another muckraking writer, David Graham Phillips, taking his cue from Russell, would go on to publish a damning series of articles in Cosmopolitan called “The Treason of the Senate” in which he called the Senate “an eager, resourceful, indefatigable agent of interest as hostile to the American people as any invading army could be, and vastly more dangerous: interests that manipulate the property produced by all, so that it heaps up riches for the few; interests whose growth and power can only man the degradation of the people.”
Applied today, Russell and Phillips’ indictment could be expanded to much of the political class in Washington, D.C., whose sycophantic loyalty to their billionaire donors, Wall Street and the mega-corporations that actually run America, is fully endorsed by a fawning corporate media.
This is what Bernie Sanders is up against in the race for the Democratic 2020 presidential nomination, folks.
He’s all alone now, save for the millions of mostly young ground troops who are trying to make his message heard beyond the megaphones of CNN, MSNBC, the New York Times, the Washington Post, and the rest of the elite establishment media. “Running Bernie Sanders Against Trump Would Be an Act of Insanity”, “Bernie Can’t Win”, and “Bernie Sanders’ Agenda Makes Him the Definition of Unelectable” are the messages screaming through those megaphones.
He came into the South with the strong tailwind given him by his victories in New Hampshire and Nevada and shared victory in Iowa. Then in marched South Carolina’s black political boss James Clyburn, a 27-year-veteran congressman, House Majority Whip, and the be-all, end-all of black politics in his state.
Clyburn gave Biden a rousing endorsement that not only won the candidate the South Carolina primary but helped catapult him to Super Tuesday victories across the South, where huge black populations loom large in Democratic primaries.
Clyburn may be black, but he’s also establishment. Otherwise, why would he endorse a candidate whose record includes working with erstwhile segregationist South Carolina Senator Strom Thurmond to make the nation’s criminal justice system more punitive, who opposed busing in the fight against school segregation, who called for cuts in Social Security on the Senate floor, who crawled in bed with Big Pharma, the credit card industry, and the banks rather than stand up to them on behalf of the people, a candidate who even eulogized Thurmond as a “brave man” whose legacy is a “gift to us all”?
Biden came out of Super Tuesday re-invigorated after his poor beginning in Iowa, New Hampshire, and Nevada, and the rest of the centrist political establishment rushed to stand beside him, Bloomberg, Buttigieg, Klobuchar, and O’Rourke. Black congressman Bennie Thompson in Mississippi, as establishment now as Clyburn, also joined the growing ranks of the elite in the Biden camp.
Sanders’ alleged fellow progressive, Elizabeth Warren, also dropped out of the race, but instead of throwing her support to Sanders she went on national television to criticize him and his supporters.
Sanders went on national television, too, before the discredited Rachel Maddow, who spent much of their time together pummeling him with questions about why young voters didn’t turn in larger numbers to support him. Sanders pointed to the traditionally low turnout among such voters, but what he should have done is point to an investigative study this past week by the crusading Facing South web magazine in North Carolina that much better explained that turnout.
“Republican-led legislatures in the South have continued to erect barriers to voting that disproportionately affect youth,” Facing South’s Benjamin Barber reported. “They include strict voter identification laws and registration restrictions, as well as closures of campus polling places.”
Citing statistics from the Campus Vote Project, Barber reported seven of 17 states passing laws requiring voter IDs in recent years will not accept student IDs. This includes South Carolina, Tennessee, and Texas. “In Tennessee, a faculty ID is an acceptable form of voters identification but a student ID is not. And in Texas, student IDs from public universities are not accepted for voting while gun licenses are.”
The corruption in U.S. politics is so endemic it’s hard even for the experts to see it for what it really is. What it really is, folks, is a special American brand of fascism that is creeping across this land. It knows no party and no allegiance other than to the almighty American dollar that is its god.

Joseph B. Atkins is a veteran writer and professor of journalism at the University of Mississippi. He is the author of Covering for the Bosses: Labor and the Southern Press (University Press of Mississippi, 2008) and the novel Casey's Last Chance (Sartoris Literary Group, 2015). His blog is http://www.laborsouth.blogspot.com, and he can be reached at jbatkins3@gmail.com.