If You Think Coronavirus Profiteering Is Bad, Wait Till the Climate Heats Up

From testing for coronavirus to treating the health impacts of climate change, universal healthcare and publicly owned medicine production are critical components for adapting to the coming crisis. 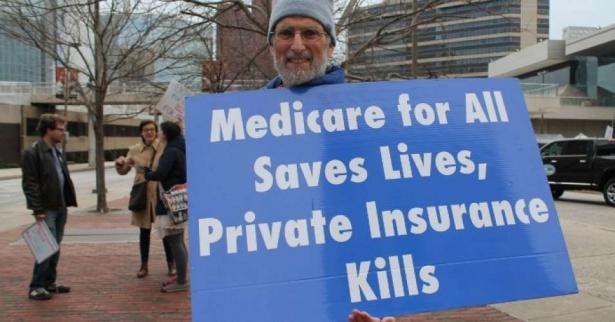 Rich or poor, Americans already spend more on medicine than any other people in the world. (, (Photo: Elvert Barnes/flickr/cc)

COVID-19 is testing the U.S. public health system. And, unfortunately, things don’t look so good — especially if you’re one of the 87 million underinsured people in this country.

The Centers for Disease Control and Prevention (CDC) has promised that coronavirus tests would be free. But that doesn’t mean that you can expect a free trip to the hospital. The New York Times recently reported that hospital trips for even a “free” test can cost thousands of dollars — which could be devastating for a family that doesn’t have insurance.

Hospitals aren’t the only winners here —  Big Pharma and biotech companies are cashing in, too. Take Novacyt PLC, a French biotech company that developed a test for COVID-19. The day they released the tests to the public, their stock surged more than 30 percent.

But if you think companies profiting off the coronavirus is bad, wait until the climate crisis worsens. Beyond even novel outbreaks like COVID-19, more familiar health threats are set to spread like wildfire.

Already, hotter temperatures are increasing the rate of heat strokes and heat exhaustion, while expanding the range of diseases like malaria or West Nile virus. Droughts spread food insecurity, wildfires cause respiratory illnesses, and floods expose people to unsanitary conditions.

A sick planet, in short, means a sick public. And, as Naomi Klein and other journalists have reported, corporations have devised a number of ways to profit off our planet’s sickness — from companies patenting  “climate-ready” crops to property insurance companies contracting private firefighters for rich clients in the path of wildfires.

One of the biggest beneficiaries, again, is Big Pharma. According to the European Pharmaceutical Review (EPR), the pharmaceutical industry expects to “benefit from a warming planet, as the spread of disease will become more prevalent, revealing opportunities for medicine markets.”

Even before coronavirus was a household name, the EPR estimated that between 385 and 725 million people worldwide will be exposed to infectious diseases as the climate crisis worsens. No wonder they find that “almost 70 percent of biotech, healthcare and pharma companies have climate change integrated into their business strategy.”

According to Morgan Stanley, $50 to $100 billion will be needed to produce vaccines alone in the coming years. Unfortunately, many pharmaceutical giants are investing in reducing access to these medications. Pfizer, J&J, and Merck Co. together spent over $19 billion in 2019 alone on lobbying efforts to keep prescription drug and health care costs high — and thus inaccessible to many vulnerable communities.

Indeed, like everything else in the U.S., the climate crisis doesn’t impact everyone equally. The Lancet, a peer-reviewed medical journal, concludes that the poor, people of color, the elderly, and children are most at risk from the health effects of pollution and climate change. And communities of color, the Kaiser Family Foundation reports, are most likely to be uninsured.

Rich or poor, Americans already spend more on medicine than any other people in the world. Numerous studies show that Medicare for All could reduce these costs while expanding coverage. So could investing in a “public option” for prescription drugs.

After all, taxpayers already heavily subsidize pharmaceutical development. One study published last year found that National Institute of Health (NIH) funding — that is, taxpayer money — “was associated directly or indirectly with every drug approved from 2010–2016.” If it’s our own tax money funding this business, why not make medicine production benefit the people who need those medicines the most?

Another recent study by the Democracy Collaborative imagines a publicly owned supply chain to produce needed medications — a “public option” for drugs. Publicly owned drug production, they find, would “combat the increasingly harmful impacts of Big Pharma which decades of regulation have failed to counteract,” from skyrocketing drug prices to the opioid epidemic.

It would also ensure that all communities get the medicine they need as the climate crisis worsens — especially communities disadvantaged by the health care system today. From testing for coronavirus to treating the health impacts of climate change, universal healthcare and publicly owned medicine production are critical components for adapting to the coming crisis.

Josue De Luna Navarro is the New Mexico Fellow at the Institute for Policy Studies. Find him on Twitter at @Josue_DeLuna.