Polls show Fox viewers are much less likely to take the virus seriously than people who get their news from more credible sources. But the Trump administration is happy with the network’s spin, which prioritizes Trump's political standing. 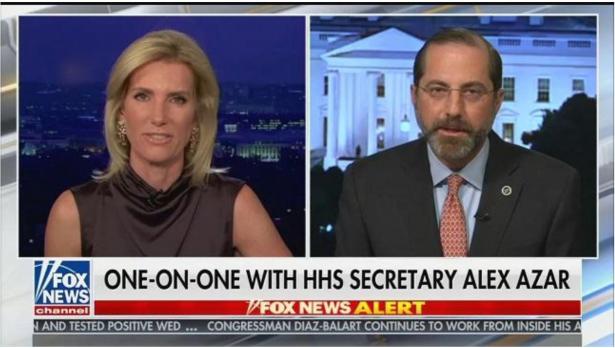 Fox News spent crucial weeks minimizing the danger posed by the novel coronavirus COVID-19 in order to protect President Donald Trump, and recent polls show that the network’s viewers are less likely to be concerned about it than other major media audiences. Top Trump administration officials are now praising the network for its coverage, even as Fox comes under fire from other outlets for endangering the public by actively spreading misinformation about the virus.

The Trump administration realizes that Fox’s propaganda is critically important in maintaining the support of the president’s base -- 79% of weekday cable news appearances by its officials between January 23 and March 18* came on the network. While the network horrifically botched its coverage in the initial weeks of the pandemic, it did so in support of Trump’s own effort to downplay the impact of the virus.

After Trump began publicly taking the coronavirus more seriously on Friday, Fox hosts seamlessly pivoted. After saying for weeks that the coronavirus was no big deal and that Democrats and the media were blowing it out of proportion to hurt Trump politically, the network’s hosts shifted to claiming that it posed so serious a crisis that criticism of the administration’s response should be off the table.

The administration appreciates their work.

“Let me just begin by saying thank you on the radio and airwaves all across America and on television,” Vice President Mike Pence told Fox host Sean Hannity during a Wednesday interview on Hannity’s radio show. “What you've been doing to broaden public understanding of the coronavirus, spreading the word, especially on the president's coronavirus guidelines Fifteen Days to Slow the Spread.”

Hannity, who has the most-watched show in cable news and advises the president, spent the early weeks of the pandemic decrying the “Coronavirus Hysteria!” and lashing out at people who he claimed were trying to “bludgeon Trump with this new hoax.” He and his guests repeatedly compared coronavirus to the flu, even though it is reportedly much more deadly and contagious. Hannity also invoked “violence in Chicago” to minimize coronavirus concerns. “So far in the United States, there’s been around 30 deaths, most of which came from one nursing home in the state of Washington,” he argued at one point. “Healthy people, generally, 99 percent recover very fast, even if they contract it.”

On his radio show, Hannity said he wasn’t that concerned with coronavirus because “we’re all dying,” told listeners to be skeptical of coronavirus warnings from news outlets and Democrats because “everything now has to be viewed through the prism of, oh, this is about the election,” and claimed that Trump’s opponents are “hoping Americans die and get sick and that we all lose a fortune in the stock market” in order to defeat his reelection campaign.

But on Friday, after Trump declared coronavirus a national emergency, Hannity said the virus was a “crisis” and called on the nation to unite behind the president. “Tonight, we are witnessing what will be a massive paradigm shift in the future of disease control and prevention,” he said. “A bold, new precedent is being set, the world will once again benefit greatly from America’s leadership. ... The federal government, state governments, private businesses, top hospitals all coming together, under the president’s leadership, to stem the tide of the coronavirus.”

HANNITY, March 9: "This scaring the living hell out of people -- I see it, again, as like, let's bludgeon Trump with this new hoax."

HANNITY, March 18: "By the way, this program has always taken the coronavirus seriously. We've never called the virus a hoax." pic.twitter.com/yLKpojA7BI

Hannity subsequently attacked “the media mob” for criticizing Fox’s coronavirus coverage, arguing that they are “doing the bidding of China” and threatening to hire lawyers to sue them for “slander, besmirchment, [and] character assassination.”

Hannity is not the only Fox host to draw praise from the Trump administration. At the conclusion of a Wednesday night interview on her Fox show, Secretary of Health and Human Services Alex Azar told host Laura Ingraham, “Thanks for all you do also to keep us all informed.”

What Ingraham had done “to keep us all informed” in February and early March included lashing out at the coronavirus “panic pushers” and saying, “The facts are actually pretty reassuring, but you’d never know it watching all this stuff.” She claimed that it “seemed like some of the Trump haters” in media “were actually relishing in this moment,” because they view coronavirus as “a new pathway for hitting President Trump,” and she attacked Democrats who expressed concerns about the nation’s state of readiness as the “Pandemic Party.”

Like Hannity, Ingraham shifted her tone last week, acknowledging the virus was a crisis but arguing that Trump had it well in hand. “In times of crisis, it helps to have a president who makes his own decisions, who marshals the right resources, and surrounds himself with the most competent people to do the job,” she said at one point. “He has a take-charge, hands-on approach to the coronavirus and every other problem he faces. He’ll work with Democrats on a legislative package to help working families. He’ll do for our emergency response system what he's done for our economy, make it stronger and better, day by day.”

Fox’s terrible early coverage of coronavirus appears to have had a significant impact on its viewers, who polls show are much less likely to take the virus seriously than are people who get their news from more credible sources. But the Trump administration is still happy with the network’s spin, because they share the same top priority: Preserving the president's political standing.

*This article has been updated with additional information. Data from Media Matters database for weekday cable news programs airing between 6 a.m. and midnight.