labor Sara Nelson: Our Airline Relief Bill Is a Template for Rescuing Workers Instead of Bailing Out Execs

Sara Nelson is working overtime to help craft a relief package for the teetering airline industry that keeps all employees on the payroll—a model she says can be “a template” for a national bill to give relief to all workers.

March 22, 2020 Hamilton Nolan In These Times
Printer friendly
Sara Nelson: Our Airline Relief Bill Is a Template for Rescuing Workers Instead of Bailing Out Execs Published March 22, 2020 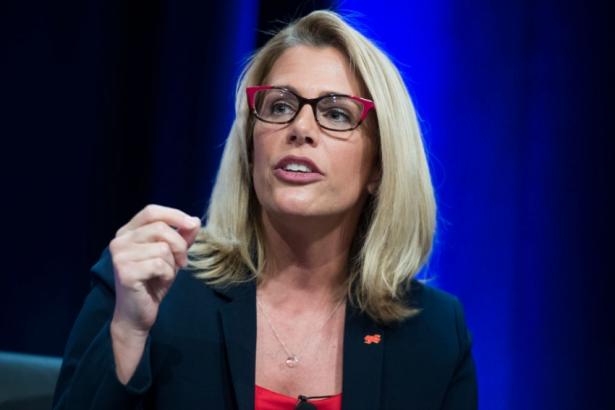 Sara Nelson is the head of the Association of Flight Attendants (AFA-CWA) and is widely considered to be a candidate for the next leader of the AFL-CIO. She gained prominence when she called for consideration of a general strike to end the government shutdown of 2019. Now, with the entire economy cratering in the midst of the coronavirus crisis, Nelson is working overtime to help craft a relief package for the teetering airline industry that keeps all employees on the payroll—a model she says can be “a template” for a national bill to give relief to all workers.

She spoke to In These Times on Wednesday about how to save the airline industry, what unions should be doing to save working people from devastation during this crisis, and the opportunities for radicalism that lie ahead.

A $50 billion airline rescue package is in the news. What should it look like?

Sara Nelson: It has to be centered on workers. We have a plan that provides payroll subsidies to keep everyone on the payroll. That’s really important, because you have to keep everyone in their job, if not on the job. Payroll subsidy for not just the airlines, but also all the airport workers, is approximately $10 billion a month. For a three month package, that’s $30 billion. So $30 billion of the $50 billion is for maintaining payroll.

What’s your sense of the likelihood of that happening?

Nelson: This has already been incorporated into the House Democratic plan, and they’re working with us on a package that would provide these payroll subsidies, plus a direct loan from the government to the airlines, with certain requirements attached. So this is a relief package focused on workers, not a bailout.

What are those requirements?

Nelson: No stock buybacks. No executive bonuses. No dividends. No breaking contracts in bankruptcies. No spending money on busting unions [The AFA-CWA says Delta has continued to send out anti-union messages during the coronavirus crisis, prompting a response from the union]. And worker representation on boards.

Tell me about what the politics have looked like in the negotiations around this.

Nelson: We’re fairly aligned with the airline industry on continuing the payroll. There’s actually zero disagreement there. Do they like some of our conditions that we want to put on them? No. But they’re not all opposed. … By continuing that payment through private company payrolls, that connects people to their healthcare. It allows them to be assured that when we get on the other side of this, they still have their jobs. The benefits for the airline industry are they don’t have the administrative nightmare of checking people out of security sensitive jobs. Nobody’s talking about the reality of what it means to put people on furlough and lay them off. It’s a huge task. Once we eradicate this threat, our economy should be able to restart immediately if we do this right.

Couldn’t the argument about continuing payrolls apply to many other industries right now?

Nelson: Yes—our view is that this is a template for every other industry. If we get this right for the airlines, you can do the same things for retail, for example. Or hospitality.

Should there just be a national bill that says we’re going to do this for everyone, rather than industry-specific programs?

Nelson: There could be a national bill. The reason that it probably makes sense to do a specific bill for the airline industry is that there is a real need right now, and we can set a template and have the political momentum to get this done. If we don’t get this done this week, or early next week, the airline industry is burning cash at a rate so great that they won’t even be able to follow federal law, or maintain the payroll in a couple months, or weeks in some cases.

What’s your best guess as to when this will be done?

Nelson: Part of the problem we have right now is that a lot of people are about to hurt very badly. But this all happened so fast that it hasn’t completely sunk in. … One month ago, the airlines were celebrating the biggest profit in history. All of the airlines announced hiring tens of thousands people this year. Not only has all of that flipped on its head in 30 days time, but we’re talking about a complete halt of air travel.

We’ve seen this before. We know this maybe better than the rest of the country. It was flight attendants and pilots who died first on 9/11. In the wake of dealing with all that hurt, in the bankruptcies that followed, they took our pensions, slashed our pay, diminished our healthcare, cut our jobs—they put it all on our back, while they took executive bonuses and we had to deal with the loss of homes and cars, and stressed marriages, and telling our kids they had to do without. We know this, and it’s up close and personal still. We’re not going to let this happen again, and we’re not going to let it happen to the rest of the country.

Should there be some coordinated union attack on this? Should every union be pushing their own industry’s response, or should there be one united front from unions?

Nelson: Transportation unions got together and agreed on a set of principles. We are coordinated around what this relief needs to look like. We’ve been sharing that through the AFL-CIO, and the labor movement has some core principles here that are aligned. The ideas around it are focused on the ability to attack the virus. So that means immediately paid sick leave, that means the ability to stay home with continued paychecks, that means getting relief to people as soon as possible, that means focusing on the resources that we need to get to people on the front lines to protect themselves. Keeping the paychecks going, and making this a worker-focused relief.

It feels like our politics have just shifted very fast. What do you think the impact is going to be on the presidential election?

Nelson: I think if labor leads on this message and this relief and this response, and we’re very clear that we have the solutions, then we have the opportunity on the other side of this to not only reshape policy, but also to inspire the American people to join unions in record numbers. If we do that, then no matter who is in office, we can shape the political momentum in this country to get real changes that help people.

A lot of working people with and without unions are wondering what their leverage is at this moment, when layoffs are coming and everything feels tenuous. What’s the leverage?

Nelson: Working people are gonna feel the hurt, and everyone is paying attention. Communications right now matters more than ever. Union communications, getting our message out into the mainstream, and pushing that by working with those who support a worker-focused relief, a.k.a. House leadership, is the way to promote that the labor movement is leading on getting results for people. People want to be part of a winning team—people want to be somewhere they can actually see results. This is a tremendous opportunity to show what the labor movement is about.

And let me pull it back out for a second: This virus is a very clear metaphor for what we always say in the labor movement, which is “An injury to one is an injury to all.” It doesn’t matter whether you’re rich or poor, or where you come from. If a virus exists and we don’t do something about it, then we’re all at risk.

When 90% of people don’t have unions, but 100% of people are in danger, will unions really be the vanguard for getting national relief?

Nelson: We’re coordinated on that. There is a call for national relief, and there’s also a recognition that if you can’t do your job, I can’t do mine. So if one person is not able to return to work, if one person isn’t able to be protected, if one person doesn’t have the ability to safely shelter, then that continues the risk of the spread of the disease. There has to be national relief… In our view, we need to be setting a template that works for everyone else, and that’s what we can do.

There are going to be areas where the template with the airline industry doesn’t work. There are going to be people who can’t stay on a payroll, and we have to help them too. But if we remove all the people who can just stay in the current systems that they’re in—it’s the easiest way to find out where we have other people that we haven’t addressed their needs, and then we can target that specifically.

Is America going to like socialism more after this?

Nelson: Every executive in America sounds like a socialist right now!

I wonder if Joe Biden will sound like a socialist…

Nelson: If we build up our political clout, and we can actually get things done, and we can actually provide a common narrative here, then we’re gonna move Biden to that narrative. We’ve already seen it happen. There’s tremendous movement that he’s already made from his political record on where he stands on particular issues, or how he’s talking about approaching the issues of today. And we’re not just gonna take him to his word—we’re going to hold him to it. But we can only do that by building our numbers and showing that we’ve actually got leadership and an ability to move forward.

In These Times is ramping up to provide you with increased coverage during the coronavirus crisis, and our online content will remain free to all.

If it is within your means, please consider making a donation to help fund our journalism during this critical time.

Hamilton Nolan is a labor reporting fellow at In These Times. He has spent the past decade writing about labor and politics for Gawker, Splinter, The Guardian, and elsewhere. You can reach him at Hamilton@InTheseTimes.com.