Detainees say officials give them little information and are not doing enough to reduce their risk. 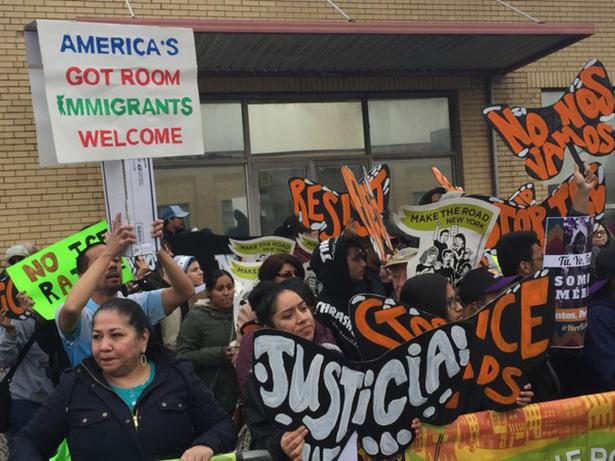 Panic has gripped an immigrant detention center in New Jersey where a staffer tested positive for COVID-19 last week, according to several detainees who complained in telephone interviews that officials have shared little information, at times failed to give them soap and are not doing enough to protect them from contagion.

The positive coronavirus test from a medical staffer at the Elizabeth Detention Center was the first known case nationwide at an immigrant detention facility, Immigration and Customs Enforcement (ICE) confirmed last Thursday.

Three detainees told The Marshall Project that officials have done little to improve sanitary conditions inside. They have gone as many as three days without hand soap, the detainees said, and no one has received gloves or masks to protect themselves. They described a facility in which immigrants, dozens of them sleeping in each common dorm, are alarmed as the pandemic spreads outside.

“Everybody’s scared. It’s not just us. Everybody’s scared,” said one of the immigrants at Elizabeth, a man who asked to be identified only by his first name, Ian. He and the other two detainees said that they and others went on a hunger strike Friday.

ICE officials have not reported a positive COVID-19 test among detainees at Elizabeth or any other detention facility in the country. A spokesperson for the agency said Monday that immigrants at Elizabeth “have soap,” but declined to answer other questions about the assertions made by the detainees and attorneys representing the men. The agency last week suspended social visits to centers nationwide and said it has a pandemic workforce protection plan and that it has supplied facilities with respirators and protective gear.

Still, many immigrants detained around the country share concerns about the virus. Ten detainees have been quarantined at Aurora Contract Detention Facility near Denver, Colorado, igniting fears among others held there. In Massachusetts, more than 50 detainees at a county jail signed a letter protesting conditions they said put them at risk. At the Essex detention center in New Jersey, some detainees last week went on a hunger strike over their concerns.

Ian, who was born in Trinidad and Tobago, said he’s been held at the Elizabeth center for over seven months. According to Ian and the two other detainees there, it wasn’t until this past Friday that medical staff spoke to them in detail about the coronavirus. When detainees asked whether anyone was sick with the virus, they were told that a guard had tested positive and that the individual was not medical staff.

ICE had confirmed to The Marshall Project the day before that the employee who tested positive was a medical employee. The agency Monday declined to comment on the apparent discrepancy.

Many of the detainees enter the medical ward every day to take medications or get checkups for pre-existing conditions. ICE last week said the employee who tested positive had limited contact with detainees.

Nicolás, a detainee from Mexico, said a supervisor earlier this month posted a flyer in the dorm that said no new detainees would be brought in as a precaution against the virus, but immigrants continue to arrive.

The flyer was “saying that they’re not bringing no more people in because [of] the virus…. That’s what they say, but they didn’t. They’re still bringing people,” Nicolás said.

“The major problem is they’re not telling us the truth,” said Emmanuel, an immigrant from Nigeria, who is also detained at Elizabeth. He said on Friday, when he and others in his unit went on hunger strike, medical staff came to speak with them about coronavirus. “The [CoreCivic] officers say one thing, the ICE officer says another thing, the warden says another thing.” CoreCivic is a private company that operates the facility under contract with ICE.

Emmanuel said he also is worried about his wife outside, and whether she might get sick.

“It’s one thing to be dealing with a crisis, it’s another when you’re dealing with the crisis without your loved ones,” he said. “I’m very depressed, I’m very frustrated. And I’m scared. Sometimes I feel like ending it all.”

The staffer regularly in charge of cleaning their dorm has not been there, Ian said, and other officers filling in were doing the bare minimum.

“All they would do is come take the garbage out. That’s it,” Ian said. “They have not provided us with any face masks, no gloves. All we get is the disinfectant every day to clean [the dormitory].”

Ian, who said he has been living in the U.S. for more than 20 years, has been detained while awaiting a decision on a spousal visa. His wife of 14 years, Vanessa, is an American citizen. They have two children together, a 13-year-old boy and 11-year-old girl, in addition to her 21-year-old daughter.

Vanessa said she fears for her husband if he gets sick inside.

With schools closed and her children at home, she’s been working the night shift monitoring patients on medical equipment at Newark’s Beth Israel hospital, five miles from the detention facility, so she can care for the children during the day.

“As much as I’m trying here, he is my backbone with the kids. And I pray to God he can get out and help,” she said.

Meanwhile, Ian is panicking. He said he has a condition in which one of his heart valves doesn’t close tightly enough. With a pre-existing sickness, he fears the worst if he contracts COVID-19.

“I’m really scared of getting sick. ‘Cause with my condition, I don’t know how my body would adapt to it,” he said.

But he said he’s stopped going to the detention center’s medical unit for his chest pains, because the visits yield little help.

At night, Ian says he can't sleep. He’s worried about a detainee who he said arrived last week to his 40-person dormitory. Ian said the man told him he had come from China, where the outbreak began. The man has been coughing uncontrollably, sneezing and appears sick, Ian and Emmanuel said. They said officials have not told them anything about the man’s health, or whether he’s been tested.

ICE declined to comment on their assertions about the man.

Rumors continue to spread inside the facility about who may be sick, Ian said, and at this point he doesn’t trust officials are being honest about the risk to detainees.

“We have gotten all these different, contradicting stories about the virus, who has it, who [doesn’t],” he said. “And we’re at the point now where we don’t know who or what to believe.”

Emily Kassie, director of visual projects, is an Emmy-nominated reporter and filmmaker who has covered corruption and abuse internationally.