'A growing concern about the disease, slight at first, then becoming deeper and more profound.' 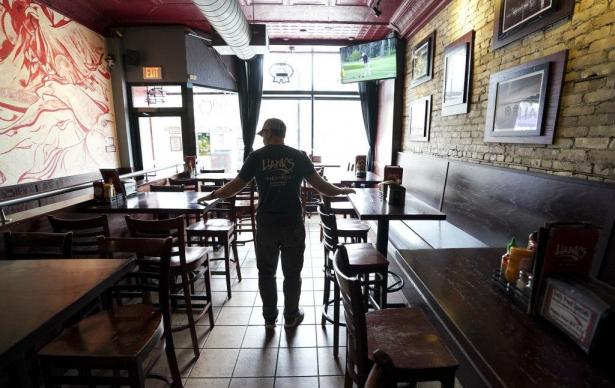 Worry slowly mounted over the past few weeks – but worry about what? I work at a bookstore that is part of a restaurant and event space. Since the New Year there has been – like the spread of coronavirus itself — growing concern about the disease, slight at first, then becoming deeper and more profound. For some, the danger has seemed exaggerated, for others danger signs were seen everywhere. By contrast, simultaneously a fear spread shared equally by all my co-workers – fear of loss of income, loss of job. That economic insecurity, more palpable, more familiar, easier to grasp and discuss, joined the nameless fear of illness. Taken together, we have lived a life of nervous anxiety.

All this contributed to an odd sensibility about customers, those coming in for a meal, to attend an event, to buy a book. After all, unlike a grocery store or pharmacy, no one “has to” go to a restaurant and so we wondered why folks might risk their health by going out to eat. Yet of course, we all wanted them to come, because if they didn’t our jobs would be gone. Initially, despite the looming threat, people came. Then, overnight, there was a drop off. Events were hit first, with attendance down and then cancelled. As news reports announced the virus’ arrival in the vicinity, numbers eating out fell more. And with that, so too did book purchases – even though some bought in case they should have time on their hands, others said, quite sensibly, now might be the time to read books that for too long have been sitting on a shelf at home. Servers, reliant on tips, were most impacted. Each day, more staff had shorter hours. Each day there was the hope people wouldn’t be sensible, they would come in, mixed with the fear that someone infectious might enter too and infect us. Both the reality and what we thought about that reality became unsustainable as the news worsened hour by hour.

New rules were set – groups seated at a table had to be of six or less, booths and tables where diners sat had to be separated by an empty one; people should not sit or stand at the bar. All rules that proved hard to enforce. What do you say to two couples with three children who come for a meal?  With a sense of foreboding, loud, boisterous crowds drank away at the bar one evening. The next, according to the rules, no bar service. Finally, the announcement: the governor declared all restaurants closed until the public health crisis passed. The last day, our regulars who come by themselves either to work with a cup of coffee or to have breakfast alone but not alone, all showed. Then the curtain closed.

The Governor’s decision was the correct one, no doubt. Public health is another way of describing taking care of each other. But it is not an easy road. While it is true no one has to eat out, it is also true that a shared meal outside of one’s home has an intrinsic value that can’t be easily measured. So too does browsing through a bookstore before making a purchase. The loss of such, when added to all the other closures involved in a quarantine, is real. It is a loss those of us who worked at this restaurant share in our own private lives.

I began by writing that I work at a bookstore, I now have to add an “ed” to that word. At the stroke of a pen, we were unemployed. For some the loss is harder than others – one co-worker was laid off from another job, her husband’s hours were cut on a job that won’t last much longer either. I wished her luck as she left with her child, blithely unaware of what’s going on because of the brave, friendly face she wore. I have my own challenges, as do we all living within that palpable, familiar territory of unemployment, of income loss and just the sense of loss.

And meanwhile, the nameless worry about our health, the health of our family, friends, neighbors, remain. As does the unanswered question: what will we do about it?