The catastrophe demonstrates the results when public health is subordinate to private profit and to a governmental apparatus that adulates the superiority of private over public administration. 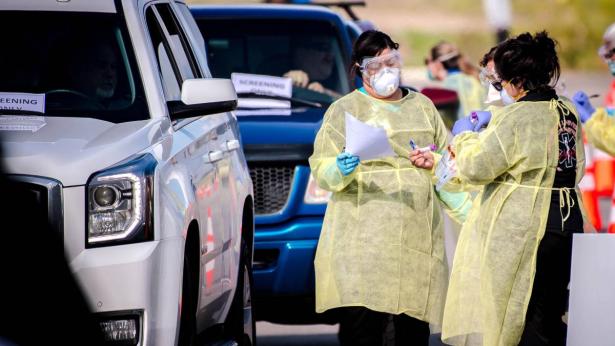 Consider the gross failure of the U.S. private, profit-driven, capitalist medical- industrial complex (four industries: doctors, hospitals, drug and device makers, and medical insurance firms). They decided not to prepare for a serious virus problem. Will so huge a failure finally tip U.S. ideology and politics in favor of socializing health care? Will the parallel preparatory failure of the U.S. government, long captured by its corporate donors in general and those in the medical-industrial complex in particular, boost a resurgent U.S. socialism? Or will a traumatized, socially distanced population turn rightward instead to a dictator for salvation from a clearly out-of-control crisis?

Trump, his government, and the system he serves need to blame the Corona catastrophe in the United States on something other than U.S. capitalism. Enter the Trump/GOP nationalism that generally scapegoats foreigners (immigrants, trading partners, etc.). Official blame targets what Trump calls “the Chinese virus.”

Yet such blaming is racist, divisive, and ignorant. Viruses have always been part of our natural world. Ongoing mutations have repeatedly produced strains that have caused widespread human sickness and death. That is why medical science has long studied viruses. In the 1918 flu epidemic, the H1N1 virus killed almost 700,000 in the United States plus many millions more around the world. It began in Kansas, yet no one since called it “the U.S. virus.” H1N1 resurfaced in 2009 as “swine flu.” Other recent viruses include SARS (2002–2004) and MERS (since 2012).

Given that history of viruses, systematic preparation for future outbreaks of seriously dangerous viruses was an obvious social need. Availability of sufficient (many millions of) tests was needed for the crucial role of identifying and separating the infected from the uninfected. Producers of ventilators, masks, hospital beds, etc. should have stockpiled them. Training should have been routinized to equip more than enough volunteers to help cope with outbreaks. To block disease transmission, plans should have been made to accommodate social distancing: securing suitable locations, appropriate supervision, distribution of supplies, etc. Likewise the consequences of social distancing—lost jobs, closed businesses, disrupted supply chains, crippled purchasing power, chaotic credit markets, etc.—should have been planned for. The newly unemployed could and should have been re-employed to manage social distancing. Yet no remotely adequate planning occurred.

U.S. capitalism failed at everything on this partial list of “shoulds.” Capitalist industries failed to serve public health because private profits were an inadequate incentive for them to do so. The government failed to compensate for private capitalism’s failures, as usual, because government leaders (drawn heavily from corporate CEO ranks) share similar mentalities.

Knowledge of the dangerous new coronavirus emerged clearly from China in December 2019. CDC documents from this past January show full awareness of its huge threat and of China’s extreme social distancing measures undertaken to control it. China’s massive coordination of public and private resources saw profits displaced by public health as the prioritized goal or “bottom line.” South Korea acted similarly. In contrast, neoliberalism has arisen and prevailed in many countries since the 1970s. It undermined the state by privatizing and deregulating. Such steps blocked the kinds of social mobilization achieved in China and South Korea. Social mobilization was and remains more partial, fragmentary, and slower in Italy, the United States, and beyond.

When infections and deaths mounted quickly, panic followed. Political leaders saw threats to their positions. Most people began to grasp how misled and underprepared their nations were, that their jobs, income, and lives were in danger. They saw their leaders floundering atop an out-of-control situation. As debt-ridden economies collapsed into sharp recessions or worse, corporate leaders turned, as usual, to the state for bailouts even as global capitalism still shook from the results of the 2008–2009 bailouts.

Crisis moods overtake most of us as we watch desperate leaders’ evident failures to cope. Schools are shut, but without plans to handle consequences: children not taken care of, taught, or often not even fed; parents with children now at home who cannot continue their jobs; emotional strains on families thrown together. No plan exists to train mental health counselors to help work on these problems. Panicked leaders foresee a possible unemployment rate of 20% (it was 25% in 1933) yet also propose cash distributions of $1–2,000 per taxpayer. That laughably inadequate response typifies what one has come to expect from a government that failed to stockpile tests, masks, and hospital beds.

Either public health—including preparedness for viruses—dominates private profit for capitalists or it does not. The coronavirus catastrophe demonstrates the results when public health is subordinate to private profit and to a governmental apparatus that adulates the superiority of private over public administration.

History’s latest virus, the coronavirus, has threatened and challenged U.S. society. But it has been our political economy that failed to meet the challenge, to defeat the threat. The catastrophe we are living through was caused by a capitalist system that could not anticipate, plan for, or cope with the coronavirus. To “get through” this catastrophe (as we did with the 1930s depression) yet leave the system intact will guarantee the next catastrophe. The need for a different economic system and a different government responsible to it is the lesson we need to learn now. Doing so can yield something positive amid the mammoth negatives raining down on us.

Richard D. Wolff is a visiting professor in the Graduate Program of International Affairs at New School University.