What does a Left Feminist, Anti-Racist Analysis of the Coronavirus Sound Like? 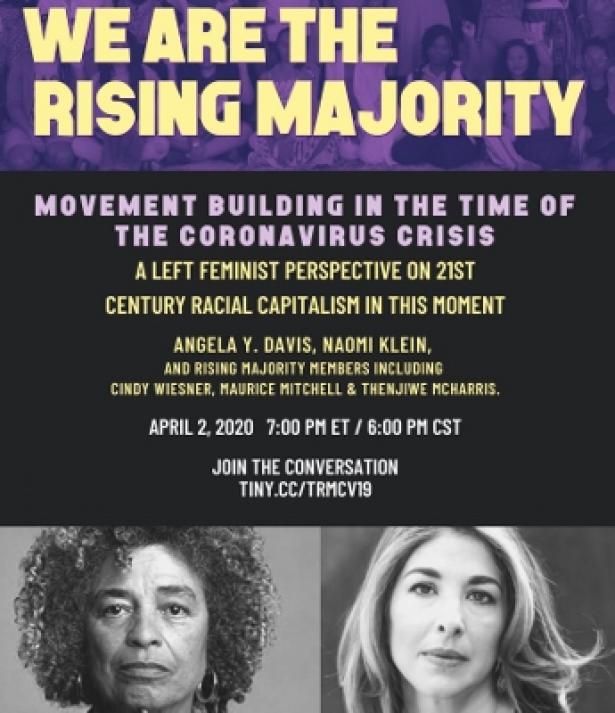 The Rising Majority will host a virtual teach-in on April 2 with two prominent speakers: internationally renown activist and intellectual, Angela Davis; and author, climate justice organizer and author, Naomi Klein. The one-hour teach in will begin at 6 p.m. CST/ 7 p.m. ET. The registration link for the call on Thursday is as follows: http://tiny.cc/TRMCV19 Within 24 hours of announcing this event, more than 5,000 participants had signed up. This seems to be a conversation people are hungry to have.

One message around the Coronavirus pandemic is that we are all in it together. Well, yes and no. We are all vulnerable, but some of us are more vulnerable than others. Essentially, the same inequalities, privileges and structures of oppression that existed before the crisis occurred, manifest themselves within it. The injustices of 21st century capitalism are on full view in this crisis. People with mobility, professional jobs with flexibility and autonomy, money in the bank and health insurance, are in a qualitatively different position, both in terms of exposure to the virus, and the likelihood they will be able to get tested and cared for if they are infected, than those with considerably less wealth and resources. The flaws and fault lines in capitalism’s infrastructure have been exposed in a painfully graphic manner. Preparedness is apparently not profitable and competition and profiteering are rampant even in a crisis where hundreds of thousands of lives are at stake. These are some of the social and economic questions that surround this crisis.

Many organizations have hosted online rallies, forums and webinars in response to the Coronavirus pandemic. We also see that movement organizing has been amazingly creative in this period. Online organizing and political education is one example of that. But there are in person actions still taking place as well. Nurses staged a rally outside Jacobi Hospital in the Bronx, New York to protest the lack of personal protective equipment. They did so, standing more than six feet apart and wearing masks. Women healthcare workers, domestic workers, low-wage workers have been very hard hit by this pandemic. Labor organizers for nurses and flight attendants have been some of the most outspoken critics of the mishandling of the crisis and the low priority that workers have been afforded overall. Another example of creative protest is the orchestrated traffic jam in front of City Hall in Philadelphia recently. With horns blaring dozens of protesters congregated in their cars to demand the release of those incarcerated in unhealthy conditions in the city jail. In New Jersey a similar car caravan protest took place demanding the release of immigrant detainees in the Hudson County ICE Detention Center. These novel forms of protest coupled with mutual aid campaigns are applauded by the broad based coalition, The Rising Majority, which advocates, aid, political education and agitation in this time of crisis.

The Rising Majority [https://therisingmajority.com] is a national coalition of over fifty organizations working on issues that include: prison abolition, anti-war work, climate justice organizing, immigrant rights and labor struggles. It began in 2016 after the election of the current U.S. president and representing the sense of alarm, fear and rage that followed it. The group’s mission is to “build an anti-racist left for radical democracy.” Rising Majority was launched out of the Movement for Black Lives and is a multi-racial coalition led by Black and People of Color. An April 2 teach-in on the current crisis is the second major national event organized by The Rising Majority this year. The first was an event in early February at Howard University with, the progressive Congresswomen known as The Squad: Alexandria Occasion Cortez, Ayanna Pressley, Rashida Tlaib, and Ilhan Omar. The event was livestreamed and focused on the relationship between electoral work and movement building. Over 100,000 people viewed the event on This Now! and Rising Majority partnered with the team at Democracy Now! to publicize and re-air the program. The Squad was interviewed by Democracy Now’s Nermeen Shaikh. Thursday’s Teach-in will featured radical writer-activists Angela Y. Davis and Naomi Klein.  Rising Majority leaders will also talk about the coalition’s work in the context of this Coronavirus moment and how others can get involved. The Rising Majority plans another virtual teach-in on May 7, 2020.