music I Have Joined the World in Mourning - Wynton Marsalis

My daddy passed away last night. We now join the worldwide family who are mourning grandfathers and grandmothers, mothers and fathers, sisters and brothers- kinfolk, friends, neighbors, colleagues, acquaintances and others. 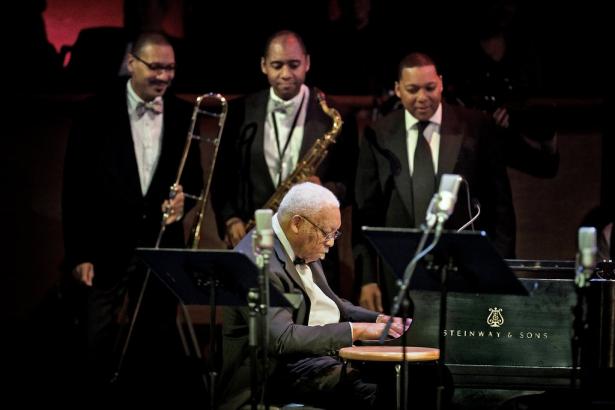 Ellis Marsalis with three of his sons, Delfeayo, left, Branford and Wynton, in 2011., Credit: Chad Batka for The New York Times

What can one possibly say about loss in a time when there are many people losing folks that mean so much to them? One of my friends lost both her mother AND father just last week. We all grieve and experience things differently, and I’m sure each of my five brothers are feeling and dealing in their own way.

My daddy was a humble man with a lyrical sound that captured the spirit of place–New Orleans, the Crescent City, The Big Easy, the Curve. He was a stone-cold believer without extravagant tastes. Like many parents, he sacrificed for us and made so much possible. Not only material things, but things of substance and beauty like the ability to hear complicated music and to read books; to see and to contemplate art; to be philosophical and kind, but to also understand that a time and place may require a pugilistic-minded expression of ignorance.

His example for all of us who were his students (a big extended family from everywhere), showed us to be patient and to want to learn and to respect teaching and thinking and to embrace the joy of seriousness. He taught us that you could be conscious and stand your ground with an opinion rooted ‘in something’ even if it was overwhelmingly unfashionable. And that if it mattered to someone, it mattered.

I haven’t cried because the pain is so deep….it doesn’t even hurt. He was absolutely my man. He knew how much I loved him, and I knew he loved me (though he was not given to any type of demonstrative expression of it). As a boy, I followed him on so many underpopulated gigs in unglamorous places, and there, in the passing years, learned what it meant to believe in the substance of a fundamental idea whose only verification was your belief.

I only ever wanted to do better things to impress HIM. He was my North Star and the only opinion that really deep down mattered to me was his because I grew up seeing how much he struggled and sacrificed to represent and teach vital human values that floated far above the stifling segregation and prejudice that defined his youth but, strangely enough, also imbued his art with an even more pungent and biting accuracy.

But for all of that, I guess he was like all of us; he did the best he could, did great things, had blind spots and made mistakes, fought with his spouse, had problems paying bills, worried about his kids and other people’s, rooted for losing teams, loved gumbo and red beans, and my momma’s pecan pie. But unlike a healthy portion of us, he really didn’t complain about stuff. No matter how bad it was.

A most fair-minded, large-spirited, generous, philanthropic (with whatever he had), open-minded person is gone. Ironically, when we spoke just 5 or 6 days ago about this precarious moment in the world and the many warnings he received ‘to be careful, because it wasn’t his time to pass from COVID’, he told me,” Man, I don’t determine the time. A lot of people are losing loved ones. Yours will be no more painful or significant than anybody else’s”. That was him, “in a nutshell”, (as he would say before talking for another 15 minutes without pause).

In that conversation, we didn’t know that we were prophesying. But he went out soon after as he lived—-without complaint or complication. The nurse asked him, “Are you breathing ok?” as the oxygen was being steadily increased from 3 to 8, to too late, he replied, ”Yeah. I’m fine.”

For me, there is no sorrow only joy. He went on down the Good Kings Highway as was his way, a jazz man, “with grace and gratitude.”
And I am grateful to have known him.