Alatorre remained active even as she turned 90, participating in amnesty marches and holding citizenship classes. To the end, she insisted that activists forsake their differences as well as glory to work for el pueblo. 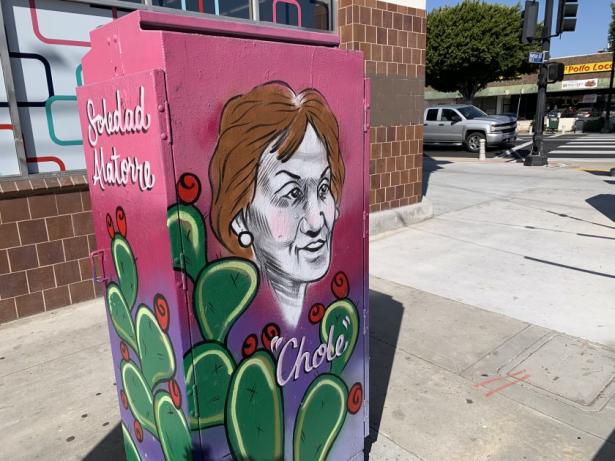 If donning a swimsuit was the best way for Soledad “Chole” Alatorre to organize Latina garment workers, then she was going to do it.

The Mexican immigrant had arrived to Los Angeles in the 1950s with a mission: to help her exploited countrymen in el Norte. She did this with a people-power play of sorts that starred her as Chekhov’s gun.

Alatorre would join a company that relied on low-paid immigrants illegally in the United States, and quickly get promoted to supervisor. With the newfound leeway, she surreptitiously taught workers about their rights and urged them to agitate for better pay.

Management would find out, then fire her. The employees would walk out. A union usually followed. And Alatorre would move on to the next challenge.

That’s how she found herself one day in a one-piece, in the name of labor.

She joined a manufacturer that had a contract for Rose Marie Reid, the glamorous beachwear brand that styled the likes of Marilyn Monroe and Rita Hayworth. Bosses noticed Alatorre’s svelte figure and asked her to model the latest designs, then walk around the factory floor so seamstresses and other trabajadoras could make any necessary adjustments.

The company quickly shut down once they realized Alatorre’s goals, but the experience sealed her legend. In labor and activist circles across California, she preached a provocative message — undocumented immigrants deserve rights, too, and can be mobilized into a force. That message went from heresy to the mainstream and forever altered politics in California and beyond.

Alatorre died March 25 at age 94 in the Mexican state of San Luis Potosí, where she was born. The cause of death was unknown.

“She was an extraordinary person,” said Rodolfo Acuña, who documented Alatorre’s career in his “Occupied America: A History of Chicanos” and is professor emeritus of Chicano studies at Cal State Northridge. “She never wavered from her message. She was never compromised.”

“She wasn’t always as appreciated because she wasn’t this big, fiery speaker in public,” said California State Sen. Maria Elena Durazo, who said she was inspired to become an activist as a college student after seeing Alatorre help strikers at a Bay Area tortilla factory in 1975. “She said regular, simple things that people believed in.”

Alatorre was raised in a union household by a father who regaled his daughters with tales of U.S. labor history; he told her about executed anarchists Nicola Sacco and Bartolomeo Vanzetti and about the Haymarket Riot. After marrying into a wealthy family at 19, Alatorre followed her husband to Ensenada for a job that didn’t materialize. Along the way, she saw caravans and camps of braceros, Mexican men who were hoping to cross into the United States, legally or not, for work.

The scene radicalized her. “It was very sad [and an] embarrassing situation for my country,” Alatorre told the Los Angeles Times in 1984.

Alatorre ended up working with the Maritime Union, the International Brotherhood of Electrical Workers, the Teamsters, United Auto Workers, and others. It was through this world that she met Chicano activist Bert Corona, who told his biographer she was “possibly one of the best organizers that I have ever known, male or female.”

He was particularly impressed with how Alatorre succeeded despite the racism and misogyny she endured from fellow labor leaders at the time. It didn’t matter to the workers she helped, Corona marveled. “They knew that a person as experienced and effective as Chole was better than almost any man.”

Together, they founded the Centro de Acción Social Autónomo (Center for Autonomous Social Action), and Hermandad Mexicana Nacional, groups focused on helping undocumented immigrants at a time when even mainstream Latino civil rights organizations reviled them.

They offered legal and social advice, protested immigration raids, and urged the media to eschew the term “illegal alien” in favor of “undocumented immigrant” — all the norm today but unheard of in the late 1960s.

For Alatorre, she was an advocate partly to force the United States to reckon with its hypocrisy.

“Now they complain about all the undocumented people,” she told The Times in 1984, “but man, they showed them the way.”

Rarely in the spotlight, Alatorre nevertheless participated in many of the crucial battles Mexican Americans in Southern California fought. She accompanied Robert Kennedy through East Los Angeles during his 1968 presidential campaign, at one point dragging him away from adoring throngs with such ease that he joked during a rally at the Greek Theatre later that night that Alatorre “saved my life.”

In the 1970s, she helped bring attention to forced sterilization of Mexican American women in Los Angeles and went to San Diego to protest against the Ku Klux Klan. Her longtime association with Hermandad Mexicana saw Alatorre help in renters’ strikes, the opening of day laborer centers, and pushes for more Latino representation on television.

As she advocated for immigrants’ rights, Alatorre also persuaded a generation of Southern California union members that they, too, should care about the issue. Among her acolytes are former Los Angeles Mayor Antonio Villaraigosa, current L.A. City Council member Gil Cedillo, and Durazo, all of whom fused immigrants and labor to create a resurgent movement throughout the city that turned into a political powerhouse.

“She would always tell us there was no way to build the kind of power for workers to be treated fairly unless everyone was going to be included, especially undocumented immigrants,” said Durazo. “She did it from the point of view that it was not only the right thing to do, but the smart thing to do.”

Alatorre remained active even as she turned 90, participating in amnesty marches and holding citizenship classes at Mary Immaculate Catholic Church in Pacoima, the city where she lived in for over 50 years until moving back to San Luis Potosí two years ago. To the end, she insisted that activists forsake their differences as well as glory to work for el pueblo.

“Divisions don’t help when you’re looking to protect the rights of the most vulnerable,” she told a reporter in 2017. “La causa should be bigger than your ego.”

Gustavo Arellano is a features writer for the Los Angeles Times, covering Southern California everything and a bunch of the West and beyond. He previously worked at OC Weekly, where he was an investigative reporter for 15 years and editor for six, wrote a column called ¡Ask a Mexican! and is the author of “Taco USA: How Mexican Food Conquered America.” He’s the child of two Mexican immigrants, one of whom came to this country in the trunk of a Chevy.