...Black Belt communities currently being ravaged by COVID-19 would benefit from the kind of sustained investment that should have been happening since 2008...just as the whiter, richer states in the NBRC did. 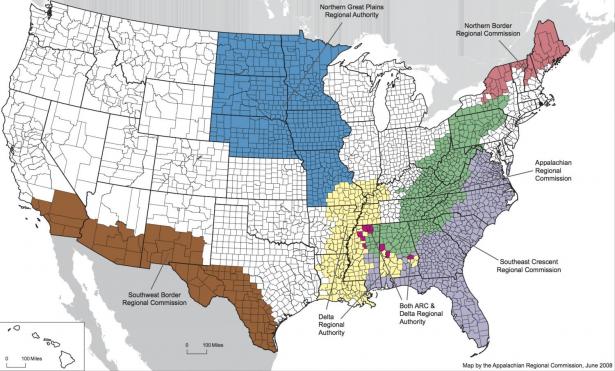 It is now clear that African-Americans are disproportionately vulnerable to illness and death from COVID-19, and perhaps no region is more vulnerable than the South.

Moreover, a new analysis from the Southern Economic Advancement Project indicates that the Southern region is vulnerable to the pandemic in ways that other regions are not. Approximately 30 percent of all wages and salaries in the South — more than $577 billion — are earned in seven industries that rely on sustained levels of household spending and so are easily disrupted. The South also has a higher proportion of elderly residents and people with disabilities, lower rates of paid sick leave, weak levels of public benefits, fewer overall resources, and nine of the 14 states in the nation that have failed to expand Medicaid. Indeed, between 2005 and 2019, 162 rural hospitals were closed, and 60 percent of those were in Southern states that rejected Medicaid expansion.

The pandemic raises an issue that should have already come up in the Democratic presidential campaign — certainly after African-American voters and House Majority Whip James Clyburn (D-SC) resuscitated Vice President Joe Biden's then-floundering White House bid: The Southeast Crescent Regional Commission (SCRC), created in 2008 to provide economic development assistance to seven Black Belt states, has been authorized to receive $30 million to $33 million annually but was never appropriated more than $250,000 in a year. In contrast, the same 2008 legislation also launched the Northern Border Regional Commission (NBRC) for similar rural development assistance in the primarily white states of Maine, New Hampshire, New York, and Vermont; it has received steady funding — growing to $25 million in 2019 — despite being a much smaller region than that covered by the SCRC.

The resources that the SCRC should have received for the past 12 years were sorely needed before, and there is palpable desperation now. The South contains approximately 84 percent of the nation's persistently poor counties — that is, counties that have had at least 20 percent of the population in poverty over 30 years. The region faces everything from raw sewage due to inadequate infrastructure, to health care deserts, to no broadband access, to a lack of living wage jobs. The SCRC was created to provide funding for job training, health care services, transportation, infrastructure, and more. SCRC investments in health care facilities and a more diversified economy — so fewer people would now be dependent on low-wage and currently high-risk work — could be making a difference right now as Southerners confront this public health crisis.

And it's not just the more than $300 million in authorized monies that the region has missed out on since 2008 — those resources are utilized to leverage significantly greater funding from private, state, and other sources. The commission is modeled after the Appalachian Regional Commission (ARC), which since 1965 has helped to cut Appalachian poverty from 31 percent to around 17 percent, and high-poverty counties in the region from 295 to 107.  The ARC's $176 million in federal funding in 2019 was matched by $246 million in other monies and leveraged more than $500 million in private investments.

All the SCRC awaits is the appointment of a federal co-chair — something Presidents George W. Bush, Barack Obama, and Donald Trump have all failed to do — and it could begin to receive the monies it was authorized to receive. It would still need to go through Appropriations, currently chaired on the Senate side by Richard Shelby, an Alabama Republican who sources say isn't a supporter, despite his being one of the states included in the commission. The others are Florida, Georgia, Mississippi, North Carolina, South Carolina, and Virginia.

Advocates believe that a lack of a Senate champion has held up a presidential appointment of a federal co-chair. The NBRC states' bipartisan delegations push hard for their commission. That doesn't seem to be happening among the senators in the SCRC states — states that historically have abysmal records when it comes to representing their African-American constituents. On the House side, Majority Whip Clyburn and Rep. Hank Johnson (D-GA) have led what seems to be a fairly lonely fight for funding.

A promising grassroots effort to revitalize a push for the Commission was recently led by Ava Gabrielle-Wise, who works on sustainable economic development and consulted on the original legislation. Over a 12-day-period ending on Super Tuesday, she was on the road — literally driving through all seven SCRC states — to convene stakeholders including community activists, scholars, local government officials, and staffers for state and federal legislators. Many were unaware of the SCRC's existence and shocked that it hasn't been funded for 12 years.

"I just don't accept that in America right now we literally have to sit by and wait for a couple people in key positions to deem us worthy in order to finally get something funded that was created 12 years ago — especially since the [Northern] commission created at the same time received funding and continues to grow," said Wise.

The SCRC isn't perfect. It would be led by Southern governors who have not prioritized Black Belt communities, to say the least.  It would need to develop an infrastructure so that individuals and organizations with a documented connection to Black Belt communities can ensure that the resources go to areas of greatest need. And, of course, the scale of investment needed in order to overcome historic inequities — inequities that can be traced from slavery right through today's non-union manufacturing, cheap wages, low taxes, and lack of investment — is far greater than $33 million a year.

But there is no question that the Black Belt communities currently being ravaged by COVID-19 would benefit from the kind of sustained investment that should have been happening since 2008. They should receive all of the monies they were authorized to receive — just as the whiter, richer states in the NBRC did.

Greg Kaufmann is a contributing writer for The Nation and the founder of TalkPoverty.org.