Fromm was famous for this critique of consumer capitalism as well as for his penetrating studies of authoritarianism. He was a significantly influential figure on U.S. radical thought during the second half of the 20th Century. 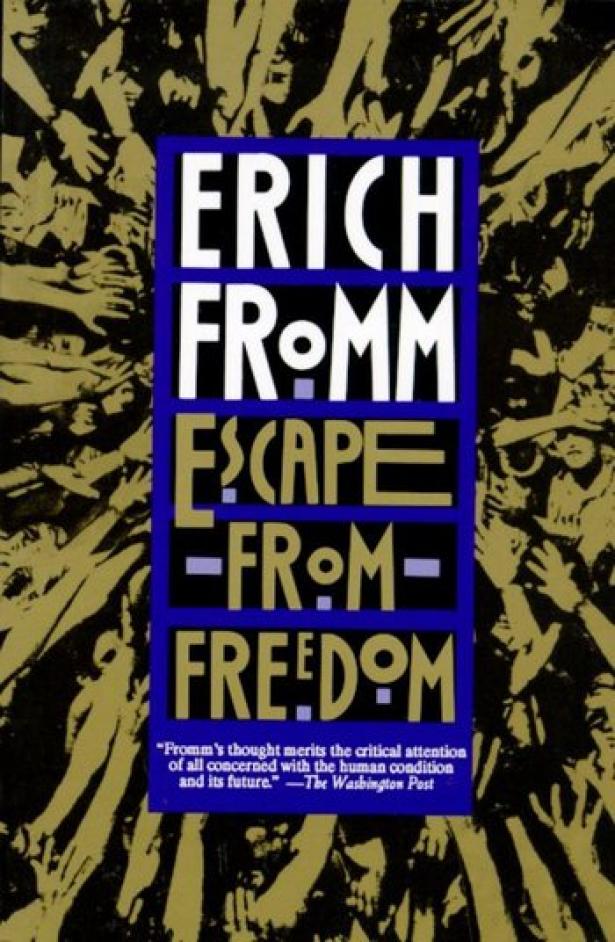 Erich Fromm (1900-1980), who passed forty years ago March of this year, was a leading Marxian sociologist who made considerable contributions to U.S. sociology and to U.S. Marxism. Best known for books such as Escape from Freedom, The Sane Society, and The Art of Loving, Fromm’s account of authoritarianism and critique of mid-twentieth century “consumer capitalism” influenced millions both inside and outside of academia.

Prior to arriving in the U.S. in the early 1930s, amidst the rise of Nazism in Germany, Fromm, who was raised in an orthodox Jewish family, was a central member of the early Frankfurt Institute for Social Research. There he worked alongside Max Horkheimer on an interdisciplinary project that sought to mix social philosophy with the empirical social sciences. Having studied sociology under Alfred Weber (Max Weber’s less famous brother) at Ruprecht-Karls-University in Heidelberg, followed by training at the famous Berlin Psychoanalytical Institute, Fromm was given central responsibility for the Frankfurt institute’s attempts at synthesizing sociology and psychoanalysis.

One of the first manifestations of this synthesis was an innovative study of manual and white-collar German workers, which was led by Fromm along with Hilde Weiss. Through use of an interpretative questionnaire, Fromm and Weiss were able to reveal that while the majority of respondents identified with the left-wing slogans of their party their radicalism was considerably reduced in more subtle and seemingly unpolitical questions – pointing to what Fromm argued was evidence of an “authoritarian” character.

Although the study itself wasn’t published until the 1980s, under the title The Working Class in Weimar Germany – this was at least partly due to the breakdown in Fromm’s relationship with Horkheimer – it is clear that it shed considerable light on what transpired in Nazi Germany, as well as telling us something about the nature of the left-wing authoritarianism.

Escape from Freedom, Fromm’s most famous work, was published in 1941, after he had left the Institute (Fromm was effectively pushed out to make way for Theodor Adorno in 1939). The central theme of Escape from Freedom was that Europe, which had hitherto been marching towards greater and greater forms of political freedom, and even towards socialism, over the course of the preceding centuries, had capitulated to fascism. Fromm wanted to try to understand this process in order to explain how and why it was that Nazism had taken hold in Germany, and why so many individuals came to support Hitler.

Like most Marxist analyses at the time, Fromm focused on the role of the lower-middle classes. He argued that the decline of their socio-economic status in the face of monopoly capitalism and hyperinflation alongside the defeat Germany suffered in the First World War and ensuing Treaty of Versailles had a deep psychological effect, removing traditional psychological supports and mechanisms of self-esteem.

In an expanded Marxian account, in which ideas and emotions played an important mediating role, Fromm identified deep feelings of anxiety and powerlessness in this class, which Hitler was able to capitalize on, with his sadomasochistic messages of love for the strong and hate for the weak (not to mention a racial program that raises “true-born” Germans to the pinnacle of the evolutionary ladder), which provided the means of escape from intolerable psychological burdens experienced on a mass basis.

Fromm’s next engagement with Marxism came in the form of his The Sane Society (1955). The book is notable for its criticism of Marx, particularly of his account of revolution. Fromm argued that the famous statement that concludes The Communist Manifesto, that the workers “have nothing to lose but their chains,” contains a profound psychological error. With their chains they have also to lose all those irrational needs and satisfactions which developed because these chains were worn. Because of this, Fromm argued that we need a concept of “revolutionary humanism,” of revolution not only in terms of external barriers, but internal ones too, one that deals with the roots of sadomasochistic passions, sexism, racism, and other forms of character that aren’t necessarily going disappear immediately in a new society.

The Sane Society also contained an extended critique of mid-twentieth century U.S. capitalism, which for Fromm was an essentially bureaucratic form of mass-consumer capitalism. As part of this critique, Fromm put forward the notion of the “marketing orientation” to describe what he saw as the newly dominant form of personality that was associated with this stage of capitalism. A social psychological refraction of the Marxian notion of alienation, the marketing orientation for Fromm was one in which people experience themselves and others as commodities, literally as something to be marketed.

Fromm’s critique of contemporary capitalism continued a year later in The Art of Loving, perhaps his best-known work. Not the most obviously socialist or Marxist book (in fact, Herbert Marcuse criticized Fromm for supposedly betraying radical thought, and becoming a “sermonistic social worker”) Fromm was nevertheless adamant that “[t]he principle underlying capitalistic society and the principle of love are incompatible,” and thus that the criticism of love (which, as he understood it, referred to the antithesis of narcissistic, racist, sexist and other forms of interpersonal relations) was also a criticism of capitalism and the ways in which it mitigated against genuine forms of love that would manifest in a more human society. Fromm believed that we must analyze the conditions for the possibility of realizing love and integrity in the present society and seek to strengthen them.

It is also during the 1950s that Fromm joins American Socialist Party-Social Democratic Federation and seeks to rewrite its program. The resulting document, although rejected for this purpose, was published as Let Man Prevail (1958). It marks out Fromm’s distinctive form of Marxism, which he here calls “radical humanism” and characterizes as a democratic, humanist form of socialism. This analysis is deepened in 1960, in May Man Prevail?, an analysis of Soviet Communism that was intended to influence the move to unilateral disarmament during the Cold War.

Fromm’s most significant contribution to U.S. Marxism, however, was Marx’s Concept of Man (1961). Containing the first full English translation of Marx’s 1844 Economic and Philosophical Manuscripts, prefaced by a few short essays by Fromm, Marx’s Concept of Man helped to popularize Marx in the U.S., as well as counteract some of the more common misinterpretations of Marx.

Fromm’s contribution to Marxism continued during the 1960s, with the publication of Beyond the Chains of Illusion (1962), in which Fromm developed his Freudo-Marxism social psychological theory of social character. Fromm was also responsible for the publication of Socialist Humanism: An International Symposium (1965), an impressive global collection of humanist Marxists and socialists, largely from Eastern Europe (including many from the Yugoslav Praxis school) but also from Africa and India.

In the years that followed, Fromm was a prominent figure in the anti-War left, influencing Martin Luther King Jr. and writing The Revolution of Hope, an attempt to influence the 1968 Presidential election. Aware of criticisms of such apparent social democratic reformism, Fromm protested that “if one is not concerned with the steps between the present and the future, one does not deal with politics, radical or otherwise.” He also wrote, Social Character in a Mexican Village (1970), The Anatomy of Human Destructiveness (1973),  and To Have or To Be? (1976), all of which further developed his distinctive Freudo-Marxian inspired humanist sociology.

Looking back on Fromm’s legacy today, at a point where sociologists and Marxists are increasingly returning to his work, it is clear that what Fromm left us is a nuanced form of Marxian sociology that can help account for the relations between economic life, political movements, and inner emotional dynamism that underpin many of the changes that we are witness to in the current world situation. In a situation that is rapidly moving into dangerous territory, in what promises to be a recession as deep as 1929, we could do worse today than to look to Fromm for assistance.

Kieran Durkin is Marie Skłodowska-Curie Global Fellow at University of York, and Visiting Scholar at University of California Santa Barbara, where he is conducting the first dedicated study of the Humanist Marxist tradition. He is author of The Radical Humanism of Erich Fromm, and editor with Joan Braune of Erich Fromm’s Critical Theory: Hope, Humanism, and the Future.