Unless instant action is taken to reduce jail populations, a terrible price will be paid. 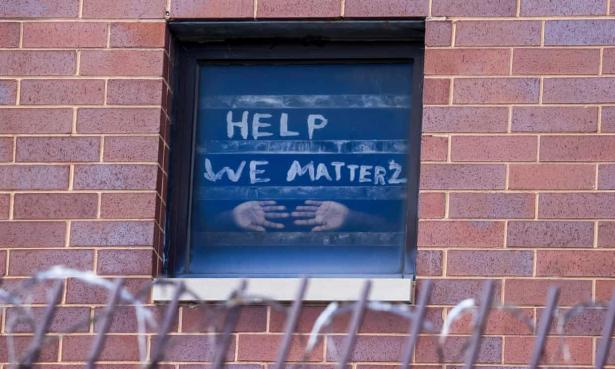 An inmate in the maximum security unit of the Cook County Jail presses his hands against the window below a plea for help in Chicago on April 10.,Photograph: Tannen Maury/EPA

America’s addiction to mass incarceration could almost double its number of deaths from coronavirus, with jails acting as incubators of the disease and spreading a further 100,000 fatalities across the US.

The startling warning comes from groundbreaking modeling by the American Civil Liberties Union (ACLU) and academic researchers, released on Wednesday.

The analysis found that unless instant action is taken to reduce jail populations, a terrible price will be paid. Jails, which house men and women not yet convicted, will act as mass vectors of the contagion.

As many as 99,000 more people could die in the US as a result of the virus being contracted behind jail walls, the study predicts. Of those, 23,000 are projected to succumb behind bars and 76,000 in surrounding communities as a result of inmates spreading the virus upon release.

“When it comes to Covid-19 deaths, mass incarceration is our achilles heel,” said Udi Ofer, director of the ACLU’s justice division.

The US is truly exceptional among countries grappling with the coronavirus in that no other nation incarcerates people on such a scale, which in turn has critical implications for the threat posed by such an outbreak. The US accounts for 4% of the world’s population, but 21% of its incarcerated population.

The ACLU modeling, developed with epidemiologists from Washington state and the Universities of Tennessee and Pennsylvania, focuses on the 740,000 people held in US jails. Conditions inside such institutions are often even worse than in the notorious prison system and amount to a Covid-19 perfect storm.

Jails are so overcrowded there is virtually no possibility to place inmates 6ft apart, and sanitation is often rudimentary.

“The two things the [Centers for Disease Control and Prevention] recommends for Americans to fight the virus – social distancing and personal hygiene – are both impossible in jails,” Ofer said.

There is huge churn in jail populations. On average inmates spend 25 days inside and many just a day or two, creating a revolving door between institutions and surrounding communities which the virus can exploit.

Add to that churn the bald fact that there are almost 11m admissions into US jails each year – one every three seconds – and the potential for jails to act as vectors of disease is evident.

Inmates, who come burdened with a relatively high incidence of underlying health conditions such as diabetes and asthma, are vulnerable to contracting the virus while incarcerated and can quickly carry it back to their communities.

The ACLU study is understood to be the first to attempt to measure the potential harm inflicted by mass incarceration in terms of Covid-19. Its calculations are based on a detailed study of one typical jail, in Allegheny county, Pennsylvania, which was used to conduct tailored modeling of individual jurisdictions across 1,242 counties that account for about 90% of the US population.

The projection that mass incarceration could cause an extra 99,000 deaths is almost certainly an undercount, as the researchers did not take into account either prisons or immigration detention centers. Those institutions have a more sedentary population but are still highly vulnerable to contagion.

Just how easily coronavirus can spread behind bars is illustrated in Ohio, where more than 1,800 prisoners at the Marion correctional institution have tested positive – 73% of the total prison number. Across the state as a whole, one in five confirmed Covid-19 cases are among incarcerated inmates.

The ACLU argues that the lesson of its research is that mass incarceration has become a major health threat to all Americans, not just those locked up. The solution, the advocacy group contends, is to reduce the jail population as quickly as possible.

Only 5% of more than 10m arrests in the US each year are for violent offences. Most people ending up in jail are there for low-level infractions, including failure to meet bail terms.

Some states and jails have made inroads in tackling the crisis. Colorado has reduced its jail population by 31% since the pandemic began, Los Angeles county by 25% and even Republican-leaning Kentucky by 28%.

Ed Pilkington is chief reporter for Guardian US. He is the author of Beyond the Mother Country. Twitter @edpilkington. Click here for Ed's public key