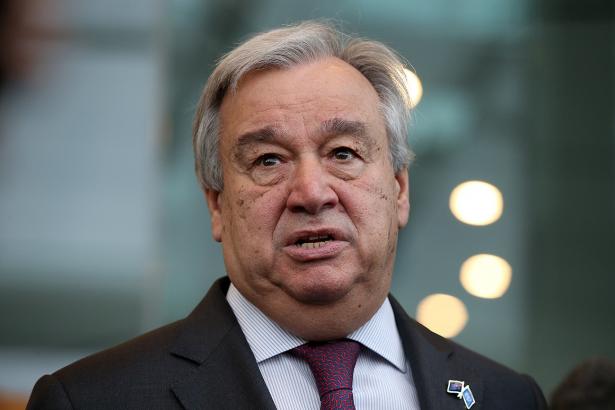 The stark language of Guterres’ prepared remarks, obtained by POLITICO, marks a new willingness by the U.N. chief to challenge the Trump administration, which recently halted funding to the World Health Organization, the U.N. health agency, and formally withdrew from the U.N.'s landmark 2015 Paris climate change agreement last year.

Guterres will push for an end to fossil fuel subsidies at a time when both oil companies and households are struggling to pay their bills. Trump committed Tuesday to bailing out the U.S. oil industry after crude oil futures prices dipped into negative territory for the first time in history.

The U.S. is the world’s second-biggest fossil fuel subsidizer, according to a 2019 International Monetary Fund report. Guterres is expected to say: “Fossil fuel subsidies must end, and polluters must start paying for their pollution.”

With many health systems and medical supply chains at breaking point, Guterres will say that while “the impact of the coronavirus is both immediate and dreadful,” there’s an “even deeper emergency — the planet’s unfolding environmental crisis.”

Guterres will argue that "climate disruption is approaching a point of no return,” adding that “greenhouse gases, just like viruses, do not respect national boundaries.”

Guterres will also propose that “where taxpayers’ money is used to rescue businesses, it needs to be tied to achieving green jobs and sustainable growth,” mirroring the demands of many Democratic lawmakers. "Public funds should be used to invest in the future, not the past, and flow to sustainable sectors and projects," Guterres is expected to say.

For much of his tenure, Guterres has tended to tiptoe around the Trump administration, in an effort to protect U.S. funding that the U.N. desperately needs to maintain its field operations, and because he fears the world splitting in two, around Chinese and American poles.

In 2019 Guterres stepped up his rhetoric on the threats to the climate, directly calling for an end to new coal projects and for a global carbon pricing system.