...white progressives and leftists underestimate the...power of strategically racist messaging, and fail to...engage in the communities the Right is targeting — white folks who are impacted by a system that consistently puts profits before people. 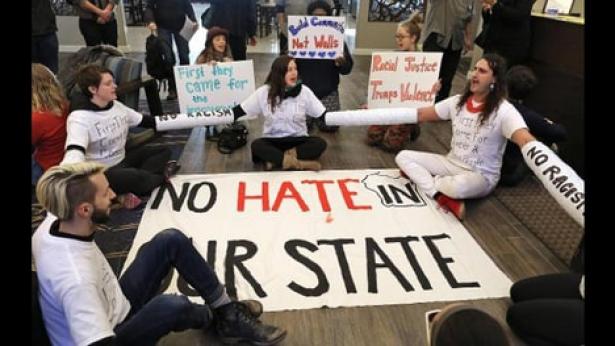 This week we’ve seen an escalation in Trump’s tactics to deflect blame for the enormous suffering and scale of death that has been caused by his administration. His egging on of the ReOpen rallies and announcement that he will suspend immigration build on the foundation of anti-Asian racism and scape-goating of China that have dominated far-right, and increasingly, mainstream news outlets over the last few weeks.

As the crisis around Covid-19 continues, I’m hearing an eerily familiar line: “There’s no way Trump wins in November because of how he’s handling this crisis.” Many are telling a familiar story about how this will be the end of Trump, and that if he wins in November it will be in spite of his actions, not because of them. We can wish this were true. However, this assessment is wrong and dangerous.

For four years now, everyone from political elites to journalists to mainstream progressive organizations have been saying “This is the thing that does Trump in.” First it was his rallies where he yelled at the media and ranted about the wall. Then the Access Hollywood video – Trump’s misogynist rant about women. Once he got into office it was the unending investigation to find the trail of proof about Russian intrigue in U.S. elections, the policy of family separation, saying there were “good people on both sides” in Charlottesville, and then impeachment. This week, many are talking about his ending immigration to the U.S. in the same vein.

But all that didn’t tank Trump’s poll numbers and Covid-19 isn’t tanking them either. The initial bump in approval Trump received the week of March 24, normal for a leader during a crisis, has dropped. But not nearly to the levels we might anticipate or expect given the severe mismanagement and uneven distribution of the bail out. This week his approval ratings hover around 43%, about six points lower than his numbers in March but higher than his average of about 40% since being in office.

Most people I’ve shared this data with have responded with the same dismissive condescension or bewilderment that I heard over and over again in the lead up to and in the aftermath of Trump’s election in 2016. “How could that be possible?!”

The answer isn’t simple, but one thing we know contributes to these numbers is Trump’s use of ‘strategic racism’, and the right-wing propaganda machine that echoes and amplifies and expands on Trump’s racist politics. A core part of the successful implementation of the Right’s strategy in this moment – as it has been for the last 40 years – is thinly veiled dog-whistle politics.

This Covid-19 emergency is new, but the way it is being used strategically by Trump and by defenders of the status quo is not. It is right out of the Republican playbook, created and strengthened over six decades. Beginning in the 1960’s, the Southern Strategy was a set of political tactics employed by the GOP to build a powerful base of white voters in the South — specifically by appealing to their racism. The Southern Strategy has become a national strategy, and today, both dog whistles and explicit stoking of race-based fear are core to the Right’s capacity to maintain political power at all levels of government. This intentional strategy uses racism to keep white voters aligned with the Republican Party and deflects blame from Trump, corporate America, and the ruling elite. And it has been effective in channeling the anxieties, insecurities and anger of millions of whites into blaming communities of color inside the U.S. and ‘foreigners’ for the troubles and hardships they face.

The Right has strong message discipline in this moment. It redirects voters’ attention away from the failings of the administration and corporate greed and offers a compelling counter narrative. They have a clear story about who is to blame: China and people of Asian descent. Thomas Edsall in the New York Times has laid out the details of their narrative, who it is targeting and why it resonates in an April 22 essay titled “Trump Reaches Back into His Old Bag of Populist Tricks.”

Trump and the Republicans call Covid-19 the “Wuhan virus” or the “Chinese virus,” and in how Trump has used his daily briefings to deflect blame to Chinese leadership for “not telling him soon enough.” In Arkansas, ads for Senator Tom Cotton are blaming Biden for being weak on China and naming China as the biggest threat to America. A few weeks ago Senator John Corywn said in a press conference that “China is to blame because the culture where people eat bats & snakes & dogs & things like that, these viruses are transmitted from the animal to the people and that’s why China has been the source of a lot of these viruses.”

Websites on the far right are pushing out stories about how Democrats have coordinated with China to spread this disease in order to regain political power and stop Trump. Christian mega-church leader Jack Hibbs, a Trump supporter, said recently, “I absolutely believe that this is biological warfare launched by China because – if China didn’t do this, they couldn’t survive the Trump administration. They had to disrupt the world to disrupt this administration and its success.” And then this week Trump offered an immigration ban as his latest solution to Covid-19.

We might be tempted to dismiss these stories as outlandish or unstrategic. It’s easy for us to laugh or roll our eyes. But over and over again, too many white progressives and leftists underestimate the staying power of strategically racist messaging, and fail to invest in and engage in the communities the Right is targeting — white folks who are impacted by a system that consistently puts profits before people.

If neutral or conflicted white voters only hear from those who are using racism strategically to maintain power, the message sticks. Trump’s response to Covid-19 is an extension of the strategy that got him elected: scapegoating people of color. Combined with a Democratic Party strategy still heavily influenced by the losing politics of the Democratic Leadership Council, established to pull the party to the right, it invisiblizes and disinvests in poor white people. It is a perfect storm for covering up the problems created by capitalism and exacerbated by the current administration.

ORGANIZE WHITE PEOPLE OR SOMEONE ELSE WILL

We dismiss the power and potency of an approach that fails to organize struggling white people at our own peril. In the lead up to the 2016 election, Linda Burnham wrote here on Organizing Upgrade that “We need to retain this lesson into the indefinite future: white rage is lethal to democracy and progress and if we’re not organizing white folks around their suffering, we can be sure that someone else is.”

We need robust organizing in majority-white communities that tells a different story, and fights for the hearts, minds and votes of the white voters who have the most to gain from a change in the status quo. This means organizing poor and working-class whites who for too long have been shamed and dismissed. Experience and data have proved that this constituency can be organized to support and fight for progressive politics if we don’t shy away from talking about race. Patronizing assumptions that poor and working-class white folks do not know they are being screwed, and that they are not receptive to the wild idea that those in power use race to divide people, will get us nowhere. In this moment we have an enormous opportunity to bring more poor and working class whites into multi-racial coalitions fighting for concrete things that people have always needed–and that in this moment are so glaringly exposed – like healthcare, housing and a livable environment.

Support for organizing in this crucial population as part of a larger multiracial, anti-racist movement is not where it needs to be. And lack of strategic focus has consequences. Less than 1% of voters in Wisconsin, Pennsylvania and Michigan handed Trump the Presidency. In Georgia, 55,000 voters – out of the four million voters who cast ballots that day – elected Brian Kemp over Stacey Abrams as the governor. And instead of an approach from Democrats that places blame on corporate elites, a broken economic system, and Trump, we now hear an echo of the Trumpist call to be “tough on China.” In a glaring example of that mistake, Biden is running ads also claiming China is at fault and that Trump did not punish them hard enough.

SEIZE THE OPPORTUNITY WITH A BOTH/AND STRATEGY

The opportunity is here. We have to get in gear, and fast, to seize it.

Here are five things those of us who are organizing in majority white communities or who are talking to bases of white people on a regular basis need to be doing in the age of Covid-19. These are essential if we are going to defeat Trump:

At Showing Up for Racial Justice we are organizing in majority white, poor and working-class communities to connect with those most suffering in these times. In rural Tennessee we are organizing tenants who are stopping evictions and utility shut-offs. That organizing supports members’ understanding that the cause of their problems are landlords, regressive state government, and not their immigrant neighbors. Our decarceration work alongside People of Color-led efforts is bringing in new poor and working-class whites who are also impacted by a criminal justice system that targets and disproportionately impacts poor white people. Our presidential field plan launching next month will talk to white voters who are susceptible to racist messaging, inoculate them to that messaging and move them to vote against Trump in critical battleground states.

To support SURJ’s work with white voters you can make a gift here.