It’s Workers Who Should Determine When Their Workplace Is Safe

States must create health and safety councils—one way that ‘essential’ workers can begin to gain one essential they lack: power. 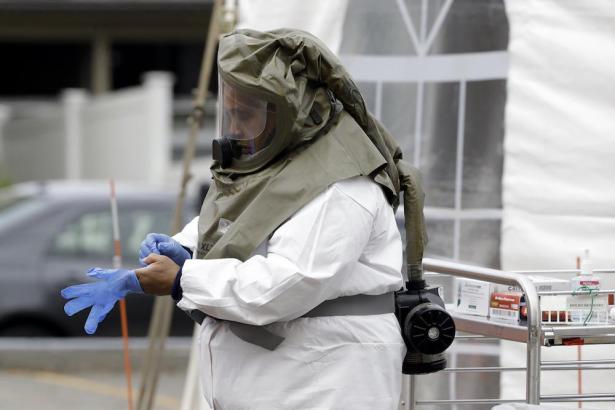 A medical worker adjusts her gloves before administering a test for the coronavirus in Somerville, Massachusetts., Steven Senne/AP Photo

This article is part of our symposium on “The Future of Labor.”

When it comes to our collective understanding of the American working class, this pandemic marks a decisive inflection point. In our moral and social imagination, we have finally displaced the white male autoworker and construction worker, let alone the vanishingly small remnant of those who mine coal, with a multicultural army of all those who staff the distended supply chains, the vital hospitals, the home care services, the warehouses, the poultry and meat disassembly lines, the sales counters, and the grocery aisles, performing the mundane jobs we once disparaged or ignored. Now denoted as essential workers by no less an entity than the Department of Homeland Security, we recognize them both for their indispensability and for their moral dignity.

Moreover, our new appreciation of these poorly paid and precarious strata of the working class reflects not just the vital role they play in the current crisis, but the centrality of these workers to firms and industries—food processing, fulfillment centers, mass retailing, and health care—that now constitute a new “commanding heights” of Western capitalism. This realization echoes the great social and economic shift that took place 90 years ago when our conception of the American working class was transformed, from that of the tradesman, railroader, or victimized immigrant to a stratum of self-confident mass-production workers organized into a set of powerful trade unions led by “the new men of power,” to use a phrase first coined by C. Wright Mills.

The celebration of these workers opens the door to their empowerment. Corporate advertisers now endorse the vital role played by retail clerks; grateful New Yorkers clap and shout at 7 p.m. each evening to honor those on 12-hour hospital shifts. But as Dahlia Lithwick points out in a recent Slate column, commending these frontline workers as heroic—or even offering them a bit of bonus money—does nothing to enhance their actual power. Indeed, praise for their heroism is actually an accommodation to their victimization, as if nothing can be done to make their jobs more safe and secure. Instead, we need laws, institutions, and unions that can make the work they do and the rewards they receive sustainable and healthy for the long haul, ensuring that careers can be built, homes purchased, and retirement assured.

What we need now is a set of prefigurative movements and institutions. Just as resistance to the Fugitive Slave Act prefigured the Emancipation Proclamation, just as the great strikes of 1919 and 1934 set the stage for the Wagner Act, and just as the integration of a Woolworth lunch counter foreshadowed the Civil Rights Act of 1964, so too must we act now to empower frontline workers, both to make their jobs safer and to create a set of models for the kind of laws and organizations that can build a militant and inclusive labor movement in those business sectors and commercial firms that now stand at the core of our economy.

If we are to “reopen” the American economy, we must be certain that our workplaces, and especially those large supply-chain distribution centers and food processing facilities, are safe. Today, they are anything but: Infections have raced through Tyson Foods plants, Amazon distribution centers, nursing homes, and prisons. Workers have quit and protested. But they remain essentially powerless, since the overwhelming majority of such worksites are non-union. As Jennifer Suggs, a Walmart cashier, told New Orleans public radio station WWNO: “We’re not essential. We’re sacrificial. I will be replaced if I die from this. I don’t have a mask or gloves. The only thing I have is a stupid blue vest.”

Managers claim that their workplaces are safe, that social-distancing rules are observed, that workers are paid to stay home if infected. But in a pandemic like this, their word cannot be trusted. From the Smithfield meatpacking plant in Sioux Falls, South Dakota, to Amazon’s Riverside, California, fulfillment center, production-line workers have been the first to sense the danger. They issued early warnings that infections were spreading, safety standards were inadequate, and supervisors were blind to the danger. Even putting profits aside, these supply-chain managers face a deadly conflict of interest: between the safety of their workers and their orders to keep the lowest-cost production and distribution of essential commodities rolling along.

Health and safety councils can be prefigurative institutions, proto-unions that can give hundreds of thousands of workers their first taste of voice and solidarity.

So here is a practical first step. In blue states like California, and even in the more conservative heartland states where infections in poultry and meatpacking plants have become a national scandal, we have to demand that as our state economies are “opened up,” new procedures and institutions are put in place to ensure the safety and voice of those on the front lines. No government bureaucracy, either that of a state health department or the federal Occupational Safety and Health Administration, has the personnel to “police” hundreds of thousands of workplaces. Indeed, public-health professionals tell us that we can expect additional infections and quite possibly a second and even a third wave of contagious transmission extending well into 2021 and beyond.

The “police power” of the state is vast. We have just seen it exercised by 44 governors who have shut down millions of businesses in the interest of the public’s safety. Unions, worker advocates, and all those seeking to stanch the coronavirus should demand the application of that same police power to mandate that every firm, college, government agency, or other workplace employing more than 25 people must establish a health and safety council before opening or staying open. These councils will be elected by all those either on the payroll or who are contractors who work in physically close proximity to those who are.

These councils will ensure that all health and safety guidelines promulgated by the state’s department of health are implemented, and if the violations are egregious, the councils will be able to temporarily close the workplace while reporting such transgressions to the local public-health authorities. In large workplaces (more than 200 workers), the elected leader of each of these councils will be relieved of his or her normal responsibilities one day of each week so as to canvass workmates, offer complaints and suggestions to management, and confer with public-health authorities and leaders of health and safety councils at similar worksites.

The creation of these councils should take place during “Opening Our State for Work Week.” On one designated day of that week, the workplace will remain open but cease productive operations to allow for informational presentations, discussion, and election of the health and safety council. Health professionals from state and county departments of public health will be on hand to facilitate discussion and election of the councils. Because no state government has enough health professionals to visit the thousands of workplaces that will be convening employee meetings, governors could use their authority to deputize sufficient volunteers to conduct these meetings. In the 19th century, lawmen and local officials frequently deputized citizens during emergencies. Nurses, physicians, students from schools of public health, and other volunteers might well be recruited. They would be trained ahead of time to instruct workers in sanitation and testing protocols, but equally important, to ensure that the health and safety councils established in each workplace are representative, effective, and autonomous.

Many of these councils can be prefigurative institutions, proto-unions that can give hundreds of thousands of workers now laboring in authoritarian workplaces their first taste of voice and solidarity. Many will fail, and some will turn into “company unions” dominated by managers and supervisors. The same problems arose in the early 1930s when the National Industrial Recovery Act mandated that in its newly formed Codes of Fair Competition, workers had the right, under its famous Section 7a, to form “unions of their own choosing.” Some of those company unions would become incubators for genuine, militant industrial unionism, as in the steel industry, but in many other instances, including coal mining, apparel manufacture, and auto production, trade unionists took Section 7a as a warrant for building their own organization, interpreting it to mean that “The President Wants You to Join a Union.” The same dynamic can unfold today, in an era when the moral standing of frontline workers has never been higher and the incompetence and mendacity of many corporate elites has been exposed to all.

It’s time for government officials, union organizers, and committed democrats to step up and help these essential workers gain what’s essential to their own, and society’s, well-being: power and voice.

[Nelson Lichtenstein teaches history at the University of California, Santa Barbara, where he directs the Center for the Study of Work, Labor, and Democracy.]