Brazil: the Story of a Shipwrecked Sailor Named Sergio Moro

On the rise and fall (for now) of Operation Car Wash’s patron in Brazil, former judge and now former Bolsonaro minister of Justice Sergio Moro. Is the judge who convicted former President Lula da Silva positioning himself to run for President? 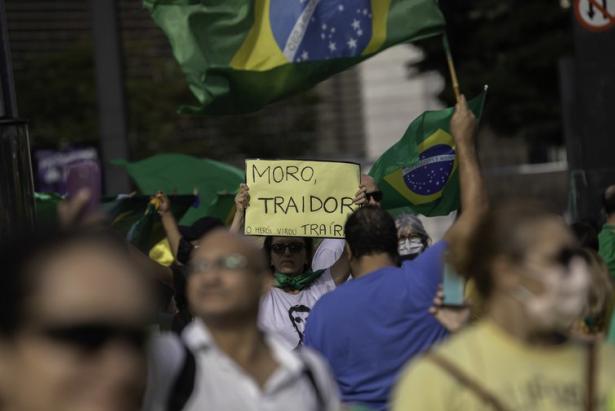 Just over a year ago, many Brazilians were surprised by Jair Bolsonaro’s appointment of then Federal Judge Sergio Moro as Minister of Justice and Security. Up until then, the judge who convicted former President Lula da Silva had often said that his vocation was the law and not politics, but he explained his change of heart by asserting that this was a technical position and that there was a need to promote reforms and ensure the continuity of anti-corruption efforts. Moro’s joining the administration lent significant political capital to Bolsonaro, whose approval ratings were consistently lower than those of the former judge. Together with Economy Minister Paulo Guedes, Moro helped to secure the acceptance of the administration by an important segment of Brazil’s middle and upper classes.

After 15 months of a troubled relationship with Bolsonaro, Moro decided to jump off a sinking ship in the midst of institutional pandemonium and one of the country’s worst health and economic crises. According to Moro, his decision was prompted by the President's direct interference in Federal Police investigations that could lead to the criminal prosecution of at least two of his children.

Moro’s political rise goes back to his reputation as a Hercules in rogue and the public’s skepticism toward the partisan political game that led the country to stratospheric levels of corruption, Rousseff’s impeachment, and a political vacuum filled by the election project that resulted in Jair Bolsonaro’s victory in 2018. It is no easy task to explain the elements of this project, but we can summarize it broadly on four pillars:

1) ideological, identified with a messianic discourse of restoring conservative ideals threatened by “leftist values” imposed by previous governments and fueled by intellectual elites and big media;

2) anti-corruption, associated with voters who support Operation Car Wash [Lava Jato] and oppose the exchange of favors between the government and members of Congress linked to corruption scandals;

3) liberal economics, which resonates with the corporate world and with those voters who favor the reduction of state involvement in the productive sector, the streamlining of government, and the modernization of the economy;

4) military, embodied in the large number of generals and senior officers serving in key positions to coordinate the government’s other political fronts.

Sergio Moro’s resignation amputates one of the beast’s four legs, but the road between political attrition and the end of a government is often as long as it is complex. Before Moro resigned, there were already signs of cramping in the anti-corruption leg.

Moro’s joining the administration lent significant political capital to Bolsonaro, whose approval ratings were consistently lower than those of the former judge.

When the alarm bells of impeachment started ringing in Brasilia, the product of cumulative attrition and the irresponsible response to the Coronavirus crisis—which Bolsonaro described several times as just a flu—he was already cozying up to the parliamentary bloc known as “Centrão.” This bloc unites the members of Congress known as the “low clergy” and small parties whose main concern is haggling over votes in exchange for pork barrel earmarks, government posts, and all sorts of concessions from the executive branch, including corrupt arrangements and pressure on law enforcement agencies to favor members of Congress or allies under criminal investigation.

In spite of his aggressive, bombastic speech and clumsy inability to maintain alliances, Bolsonaro’s résumé includes nearly three decades of hopping between various parties of the Centrão, and he is well acquainted with how the underworld of the Brazilian Congress operates. This background, coupled with the political and social stress of a third impeachment since the restoration of free elections in 1989, the enduring support of a solid 35% of the electorate, and the need for institutions to concentrate their efforts on the Coronavirus disaster has given Bolsonaro an extra dose of political oxygen.

In any case, the patience of those members of Congress who are still committed to an ethic of responsibility depends on the government’s ability to staunch the wounds to the economic leg. A contentious divorce with the Minister of Economy and the ensuing loss of support from the business sector would only encourage the use of a judicial shortcut to remove Bolsonaro from the presidency without the need for a tedious impeachment process. It is precisely through this shortcut – investigations into obstruction of justice and other common crimes denounced by Sergio Moro – that the blow to Bolsonaro could be fatal. Although a conviction for common crimes and the judicial suspension of his term would have to be authorized by a qualified majority of Congress, such a procedure would be less cumbersome and faster than an impeachment trial like the ones faced by Collor de Mello and Dilma Rousseff.

Moro has stayed silent when asked if he will be a presidential candidate in the 2022 election.

In the midst of this political-judicial chess match, Moro continues to make damaging statements about how the president has used his position to shield his own and especially his family’s scandals. Meanwhile, the former judge and now former minister has stayed silent when asked if he will be a presidential candidate in the 2022 election. This reticence about his next steps, typical of good politicians; his status as a judicial celebrity despite actions that often mixed legal and political criteria; and the weight of many voters’ support for Operation Car Wash place Moro as one of Bolsonaro’s main opponents, if Bolsonaro survives politically until 2022.

Moro, who has experience in handling the popular sentiment that the solution to the country’s problems lies in finding a new savior for the nation—frustrated by Lula da Silva and now by the false messiah Jair Bolsonaro—could capitalize on the neglect demonstrated thus far by the public institutions that should serve as a check on the executive branch. It is precisely in this glorification of the leader, and the obfuscation of institutions, that Bolsonarismo and lavajatismo come together, with a mere difference in degree. While Moro dissembles and denies having violated procedural rules and the rule of law when he served as a judge, Bolsonaro applauds contempt for the institutions of the Republic.

Moro tends to deflect the issue when asked if he had been in communication with Bolsonaro’s campaign team in 2018 while he was selectively leaking statements to the press by former Ministers of the Workers’ Party (PT) and fast-tracking the criminal proceedings against Lula in order to disqualify the PT’s eternal presidential candidate, as well as to malign the campaign of Fernando Haddad, who was announced at the last minute as the PT’s Plan B in the elections. Bolsonaro, in turn, has no qualms about appointing a personal friend of his children as Federal Police Chief, just when that entity is conducting investigations that could directly implicate them.

Moro’s political future depends on his ability to convince part of the electorate that he is just a shipwrecked survivor of a ship that sank due to its captain’s inexperience.

Moro’s political future depends on his ability to convince part of the electorate that he is just a shipwrecked survivor of a ship that sank due to its captain’s inexperience. But this narrative may be frustrated if the captain or other sailors bring up evidence that Moro is equally guilty for the sinking of the ship on which Brazil’s democracy embarked in 2018. In that case, Moro’s fate may be similar to that of Luis Alejandro Velasco, the lone survivor of the 1955 wreck of the Colombian destroyer Caldas. After being rescued alive, Velasco was celebrated as a hero, and then-general and dictator Rojas Pinilla was able to capitalize on the prestige he brought to the Colombian navy. Years later, it became known that the real cause of the event had been an overweight load of contraband, and the surviving shipwrecked man and Rojas Pinilla’s government were both disgraced in the eyes of the public.

Velasco’s testimony was immortalized by Gabriel García Márquez in a series of reports that later became the book The Story of a Shipwrecked Sailor. García Márquez described the interview with Velasco as the “story of a shipwrecked man who drifted on a life raft for ten days without food or water, was proclaimed a national hero, kissed by beauty queens, made rich through publicity, and then spurned by the government and forgotten for all time.”

Unfortunately for Moro, Captain Bolsonaro is still far from being shipwrecked and has at his disposal a full-fledged digital militia capable of firing off criticism and smear campaigns on social media, against adversaries and sometimes against his own allies. Ironically, when media outlets revealed private conversations that suggested irregular coordination between Moro and prosecutors in the Operation Car Wash case, Bolsonaro’s digital militia was activated to discredit the messengers and Moro refused to hand over his cell phone in order to have an expert disprove the content of the messages leaked to the press. Now, Moro is relying on an expert examination of his cell phone to prove the accusations against Bolsonaro and is exposing himself to attacks by the same machinery that rescued him when the questioning of his image as an irreproachable judge looked as though it would wreck his political career.