Trump is seeking to build social-media companies such as Twitter and Facebook into part of an authoritarian infrastructure that amplifies his power and silences the opposition. 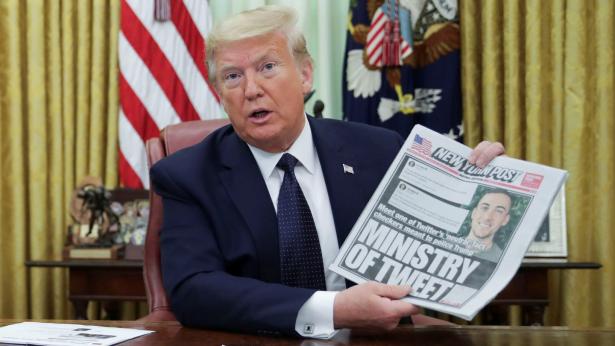 Sarah Palin knew her rights had been violated.

Just days before the 2008 election, the Republican vice-presidential nominee told a conservative radio host that the press was trampling on her right to free speech.

“If [the media] convince enough voters that that is negative campaigning, for me to call Barack Obama out on his associations,” Palin said, “then I don’t know what the future of our country would be in terms of First Amendment rights and our ability to ask questions without fear of attacks by the mainstream media.”

As absurd as it may sound, Palin’s bizarre interpretation of the First Amendment has now been adopted by the president of the United States. On Tuesday, the social-media company Twitter added a label to one of the president’s tweets, which falsely declared that mail-in ballots would be “substantially fraudulent,” urging users to “get the facts about mail-in voting.” Twitter did not ban Trump from the platform, or censor his tweet, although it would have been fully within its rights to do so, and in accordance with its own terms of service. It merely appended additional context showing that the president’s claim was false.In retaliation, Trump signed an executive order yesterday afternoon directing the federal government to “reconsider the scope” of Section 230, a provision of federal law that shields companies from liability for content posted by their users. The First Amendment was explicitly written to protect the right of citizens to express opposition to their leaders; it says that Congress “shall make no law … abridging the freedom of speech, or of the press.” But to the president, criticism of his falsehoods is a violation of his free-speech rights. This position reverses the purpose of the First Amendment, turning an individual right of freedom of expression into the right of the state to silence its critics.

Internet-communications companies have a tremendous amount of power to shape public discourse, power they have often wielded irresponsibly. There are substantive debates to be had over the scope of that power, and whether state action is necessary to prevent monopolies or more strongly regulate the use of private data. But the president’s actions are little more than an attempt to use state authority to intimidate social media companies into amplifying his falsehoods.

Most free-speech debates over the past few years have involved not government censorship, but arguments over what forms of expression or behavior deserve social sanction or opprobrium, and over the line between proportionate outrage and cruelty. But Trump’s attempt to punish Twitter for labeling his tweet is a textbook free-speech issue, one that involves the core democratic right to criticize the government. The responses from the pro-Trump right, after years of hand-wringing about campus protests and mean tweets, are telling.

The Wall Street Journal took the opportunity to scold Twitter for “handing Mr. Trump evidence to prove his point that technology elites are out to get the President and his followers,” arguing that any forthcoming government censorship would be its fault because it angered the president. Writing in the New York Post, Sohrab Ahmari cheered Trump on, announcing, “If Twitter is going to ‘fact check’ the leader of the Free World,” then “it should be treated as the publisher that it is—with all the liabilities that entails.” Aside from Ahmari’s bizarre misunderstanding of the law—Twitter and other platforms are protected from liability from what its users post, not what the company itself posts—not needing permission from the state to criticize it is part of what makes a society free. The “free world” envisioned here is one in which Americans are free to say all the nice things they want about the handsome and smart Mr. Trump.

This should be obvious, but if your freedom to speak depends on the president approving of what you say, then you simply don’t have freedom of speech. The Trumpist defense of state censorship of social media is that if you do not want your kneecaps broken, then you should make sure you pay the protection money. Twitter is hardly the first media company to face this kind of extortion from the president; as my colleague David Graham points out, Trump has attempted to use the authority of his office to silence criticism from the Washington Post, CNN, members of the White House press corps, and even ESPN.

Although the actual legal effect of the order remains unclear, its intent is not. Democracy is impossible if private citizens cannot publicly oppose their leaders. The ultimate goal of Trump’s retaliation is to chill criticism of his actions and behavior, by sanctioning online platforms that engage in such criticism. Contrary to the president’s claim, Twitter was not “stifling free speech” by criticizing the head of state. But in directing the federal government to punish Twitter  and other social-media companies, Trump was engaging in a form of censorship.

Social-media companies have First Amendment rights. They are allowed to define their own terms of service, and to decide who is in violation of them. Twitter is no more obligated to let you use its service than a restaurant owner is to serve you if you are not wearing shoes or a shirt. This has worked to Trump’s benefit—although his posts frequently violate the terms of service of social-media platforms, his power and influence means that the companies are loath to remove him for his transgressions.

Nor would removing the liability protections of Section 230 necessarily lead to a fairer, less moderated internet. Although some conservatives, prodded by Republican lawmakers, have suggested that the law’s protections are conditioned on platforms’ remaining neutral toward political viewpoints, no such provision exists in the text of the law, and such a requirement would raise its own free speech issues.

What Section 230 does do is keep companies from being sued when one of their users makes a defamatory claim, like falsely accusing someone of murder, as Trump himself has done repeatedly to the conservative cable-news host Joe Scarborough over the past few weeks. Trump, as president, enjoys some protections against defamation suits, but removing the protections of Section 230 would make online publishers more, not less, likely to moderate the things their users write, lest they be sued for a fraudulent or defamatory claim. Every restaurant review, comment section, or status update would become a liability risk for the company hosting them.

There is a genuine debate to be had about the limits of Section 230. As Sarah Jeong wrote in The New York Times last July, the liability shield prevents platforms from being sued for libelous claims made by users, but it has also been used to protect companies that refuse to take down revenge porn. The presumptive Democratic nominee for president, Joe Biden, has argued that Section 230 should be revoked to prevent platforms like Facebook from promoting false information. Senator Ron Wyden of Oregon, the lawmaker who wrote Section 230, has defended the provision, arguing that “If you unravel 230, then you harm the opportunity for diverse voices, diverse platforms, and, particularly, the little guy to have a chance to get off the ground.” Whether you think these arguments are good or bad, they are at least tied to what the law actually does. As Jeong wrote, “there can be no honest debate over a version of C.D.A. 230 that doesn’t exist.”

Evelyn Douek: Trump is a problem that Twitter cannot fix

Trump’s goal, though, is not honest debate. It is censorship. If the tech companies do not promote his propaganda, or maintain his exemption from their own rules, they will be punished. His approach reflects a growing sense of victimization on the right over the shifting terms of public discourse, in which their views about politics, race, gender, and sexuality are now subject to harsh criticism from those who disagree with them. The growing diversity of the United States has so rapidly disrupted the grip on power that cultural conservatives once held—it was but a generation ago that Democrats wanted to censor rap music and ban same-sex marriage—that they are now turning to the power of the state to settle debates they are no longer confident of winning in the public square. Trumpists do not seek to curtail the power of Big Tech. They seek to wield it against their enemies.

The leadership of the tech companies understands this. Facebook CEO Mark Zuckerberg criticized Twitter’s actions yesterday morning, saying on Fox News that social-media companies should not be “the arbiter of truth.” But Facebook has been happy to make such decisions in Trump’s favor, genuflecting toward power while maintaining a facade of neutrality. In October, Facebook happily published an ad from a pro-Trump political action committee that falsely accused Biden of corruption without fact-checking it; this month it labeled a critical ad from the anti-Trump Lincoln Project “partly false.”

The reach and influence of social media is novel, and there are no obvious rules that avoid curtailing someone’s rights or concentrating too much power in the hands of one entity or another. But the public having to rely on the willingness of wealthy tech executives to resist political pressure from a president who wants to coerce them into doing his bidding is no solution.

This story is part of the project “The Battle for the Constitution,” in partnership with the National Constitution Center.

Adam Serwer is a staff writer at The Atlantic, where he covers politics. Twitter. Email.

Enjoy unlimited access to The Atlantic for less than $1 per week.