Trading One Uniform for Another: Can Police Be "De-Militarized" When So Many Cops Are Military Veterans?

Getting police departments to stop acting like an occupying army will require many fundamental changes, including much closer screening of job applicants who are veterans and ending their preferential hiring treatment. 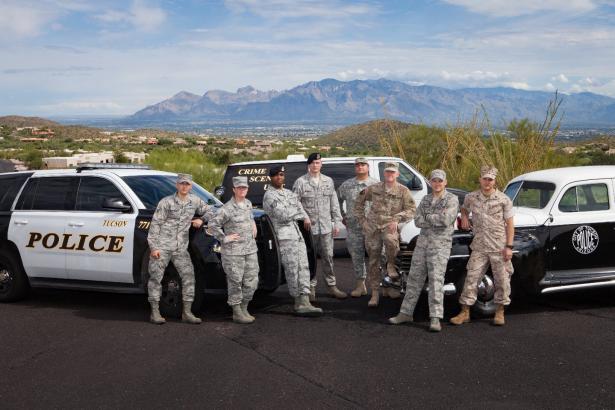 Calls for de-militarization of law enforcement have gained new momentum in the wake of nationwide protests against police brutality. That process won't be easy in a nation where nearly one fifth of all cops are military veterans — including Derek Chauvin, George Floyd's killer in Minneapolis and Robert McCabe, one of two officers charged with felony assault for knocking down a 75-year-old protester in Buffalo.

When loaded down with cast-off Pentagon gear, police officers from any background are more likely to regard peaceful protestors as enemy combatants, particularly when the Pentagon's own top official refers to their protest scenes as "battle space." But studies show that employing people with experience in war zones abroad has not been a boon to "community policing" either.

Getting police departments to stop acting like an occupying army will require many fundamental changes, including much closer screening of job applicants who are veterans and ending their preferential hiring treatment.

Policing is currently the third most common occupation for men and women who have served in the military. It is an option widely encouraged by career counsellors and veterans' organizations like the American Legion.  As a result, several hundred thousand veterans are now wearing a badge of some sort. Although veterans comprise just 6 percent of the US population, they represent 19 percent of all law enforcement personnel.

This disproportionate representation is due, in part, to preferential hiring requirements, mandated by state or federal law. In addition, under the Obama Administration, the Department of Justice provided local police departments with tens of millions of dollars to fund veterans-only positions.

As noted [EF1] by the Marshall Project, in its 2017 report, "When Warriors Put On the Badge," this combination of hiring preferences and special funding has made it harder to "build police forces that resemble and understand diverse communities." The beneficiaries have been disproportionately white, because 60 percent of all enlisted men and women are not people of color.

Justice Department officials, particularly under President Trump, have shown little interest in tracking the later job performance of recently hired veterans or how their military background might affect their behavior vis-à-vis the public. As former DOJ official Ronald Davis told Marshall Project researchers" "I reject the notion that a returning veteran, who has seen combat, should cause concern for a police chief. I would even hire more if I could."

However, a 2009 report  by the International Association of Chiefs of Police  raised multiple concerns about "the integration of military personnel" into law enforcement  after their service in post 9/11 conflicts.  According to this study, "veterans returning from the Vietnam War could easily distinguish their combat environment – mostly jungle, farm, or open terrain – from their urban or suburban policing environment.  In the case of returning combat veterans from Iraq or Afghanistan, their combat environment and their policing environments may appear surprisingly similar."  The report warned that past-deployments "may cause returning officers to mistakenly blur the lines between military combat situations and civilian crime situations, resulting in inappropriate decisions and actions, particularly in the use of less lethal or lethal force."

Co-sponsored by the DOJ's Bureau of Justice Assistance, the Police Chiefs' report also noted that combat veterans who suffer from post-traumatic stress disorder and related "depression, anger, withdrawal, and family issues" may have greater propensity for "inappropriate use of force."  Some chiefs felt that veterans under their command came back "ill prepared for the civilian world" because their PTSD left them with "exaggerated survival instincts." Nearly a third believed that veterans on their force often had "psychological issues" of some sort, 14 percent had received more citizen complaints about officers who were veterans than they did about non-veterans, and 10 percent reported instances of "excessive violence" involving former military personnel.

Veterans of, course, got high marks for their physical fitness, weapons-handling experience, habituation to discipline, and leadership qualities. Yet the report notes that some had trouble "readjusting to receiving rather than giving orders, trusting others, and changing the rules of engagement."

A study by researchers at the University of Texas School of Public Health, which focused on the Dallas Police Department, found that officers with military experience used their guns while on duty more than non-veterans. During a ten-year period, nearly a third of all 516 Dallas cops involved in a shooting incident were veterans. Those who had been deployed overseas were nearly three times as likely to have fired their weapon; those who had not been deployed were still twice as likely to be involved in a shooting. The study concluded that some veterans employed by the Dallas police department lacked "critical thinking skills" when confronted with "high stress scenarios."

Similar findings were reported by the Marshall Project after it studied use-of-force complaints and fatal police shootings in several other cities. In Boston and Miami, officers with military experience generated more civilian complaints of excessive force. Nearly a third of the Albuquerque officers involved in a total of thirty-five fatal shootings between January 2010 and April 2014 were veterans.  A lawsuit against one of those officers, who killed an unarmed motorist, revealed that he was an Iraq war veteran, whose PTSD caused flashbacks, nightmares, and black-outs. Nevertheless, as the Marshall Project discovered, he was "assigned to patrol a high-crime area of town known as 'the war zone.'"

The Marshall Project recommended that police departments have clear and consistent policies to "evaluate employees' mental and physical fitness ...to ensure public safety and guarantee a stable, reliable, and productive workforce." Yet, it found that actual screening practices are far from standardized or effective. "Some agencies employ the use of administrative interviews and psychological evaluations to assess how veteran officers will perform the essential functions of their position, while other agencies revert to their department medical officer, or lack any policy at all."

An additional concern is that veterans will be more vulnerable to well-known occupational hazards of police work-- like alcohol or drug abuse, domestic violence, divorce, and high rates of suicide. As Blue Health, a mental health advocacy group for police officers and their families, reported in January, far more cops died by their own hand (228) last year than were killed in the line of duty (132).

One of the many veterans that we interviewed for a forthcoming book is a soldier who returned Iraq with severe PTSD but became a deputy sheriff.  After his wife threatened to leave him unless he gave up policing, he sought residential treatment twice and was finally forced to choose between his family and his job, which left him angry, irritable, and often volatile. "I don't like gray areas," he confessed. "If I'm in for a penny, I'm in for a pound. What that means is I can play cop, or I can play family man." With vocational rehabilitation help from the Department of Veterans Affairs (VA), he became a skilled construction worker instead.

Other veterans, well known for their criticism of "forever wars" and the harm they've done to ordinary soldiers, are joining the fight against militarization of public safety. Common Defense, the progressive veterans' group, has launched a "No War On Our Streets" campaign. Among those involved is Kyle Bibby, a former Marine Corps infantry officer, Annapolis graduate, and co-founder of the Black Veterans Project. According to Bibby, who served in Afghanistan, veterans have unique credibility as critics of putting of $7 billion worth of military hardware in the hands of local police departments. "It was our equipment first," he says. "We understand it better than the police do...It's important that we have veterans ready to stand up and say: 'These weapons need to go.'"

Tougher to tackle is the issue of ex-military personnel being over-represented in the ranks of domestic law enforcers. When you leave the service, says Danny Sjursen, a West Point graduate who fought in Iraq and Afghanistan, "there's no de-programming...They just load you up on meds and then you go straight to the police academy." According to Sjursen, "military-style of policing is based on notion that high-crime areas should be treated like occupied countries." So the "military-to-police pipeline" increases the chances "that a guy comes back to Baltimore, Camden, or Detroit and functions the same way we did when occupying Kabul or Baghdad."

Among those also at risk when that happens are fellow veterans; since 2018, at least six African-Americans who served in the military have died in police shootings, including a troubled young Air Force veteran killed in Indianapolis last month.

Retired Army colonel Andrew Bacevich, a distinguished military historian who served in Vietnam, argues that, in the past, it might have made "all the sense in the world for us to vector vets toward the police force." But that was before the post 9/11 generation of veterans returned home with such high rates of PTSD, substance abuse, and suicide. "To the extent that we've got a bunch of damaged young people," Bacevich says, "then maybe the last thing we want to do is put them in a job where they carry a gun in an environment that's going to make things worse."

Suzanne Gordon is the author of several reports and books on veterans' heath care, including Wounds of War. Steve Early is the author of Refinery Town, a book that chronicles police department reform in Richmond, CA. They are currently working on a book for about veterans' issues. They can be reached at Lsupport@aol.com.