City leaders are urged to direct the money to "more relevant city agencies, harm reduction programs, and community-based organizations who are better trained and equipped to actually keep our communities safe." 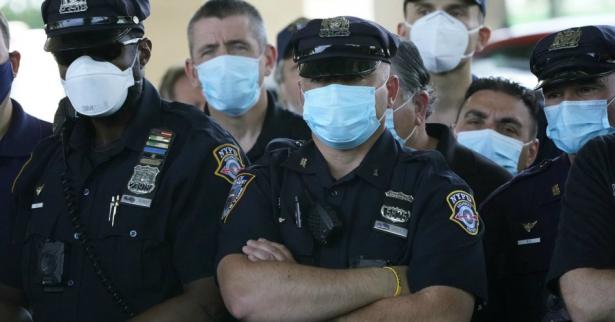 After nearly a month of nationwide racial justice protests and renewed calls to defund local police forces and reinvest that money in resources that better serve communities, a new policy brief on Tuesday detailed how much policing in New York City is focused on drug and other low-level offenses and disproportionately impacts Black and Latinx residents.

"Stark racial disparities persist among these drug arrests and violations, despite data showing similar rates of use across populations," the brief says, noting that 45% of people arrested or cited for drugs were Black and 38.8% were Latinx despite making up only 25% and 30% of the city's total population respectively.

"The trends in drug enforcement in NYC mirror enforcement of other low-level offenses, often referred to as broken windows policing," according to DPA. The brief says that in 2019, the city spent an estimated $456 million enforcing such offenses, which accounted for 28.5% of the patrol services expense budget, and "extreme racial disparities exist in broken windows enforcement as well."

DPA released the brief in support of a call from the Communities United for Police Reform (CPR) coalition that New York Mayor Bill de Blasio and the NYC Council cut the next NYPD expense budget by at least $1 billion and redirect those funds to helping communities of color.

"For decades, we've seen the harms of overpolicing up close in our work to end the marijuana arrest crusade in New York. We've watched as policing has played a pivotal role in the racist drug war and how resources have been funneled into law enforcement instead of vital services that make our communities safer," Melissa Moore, DPA's New York state deputy director, said in a statement. "In too many cases, drugs have been used by the NYPD—the largest and most militarized police force in the United States—as an excuse to target, harass, assault and kill Black people."

"It's beyond time to shift resources and reinvest that funding into ending our city's overdose crisis, homelessness, and vast inequality—especially as we face extreme budget shortfalls due to the pandemic," Moore added. "Mayor de Blasio and the NYC Council must act in this historic moment to cut at least $1 billion from the NYPD's FY21 expense budget and reallocate those resources to the more relevant city agencies, harm reduction programs, and community-based organizations who are better trained and equipped to actually keep our communities safe."

Local leaders throughout the country have faced similar demands in recent weeks as people have poured out into the streets—despite the ongoing coronavirus pandemic—to demand an end to U.S. law enforcement's violence toward people of color since Minneapolis police killed George Floyd in late May. The CPR coalition in NYC is campaigning to #DefundNYPD and for #NYCBudgetJustice.

CPR on Tuesday sent a letter (pdf) to NYC leaders reiterating demands that the mayor and city council:

Hiawatha Collins is a community leader and board member at VOCAL-NY, one of the groups behind CPR. In the statement announcing DPA's brief, Collins declared that "the drug war has been waged on Black and Brown communities since its inception, and the police have acted as its foot soldiers. They have, and always will, constantly target us."

"We can't talk about the resources people who use drugs need without ending the racist policies and policing of our bodies and neighborhoods," Collins added. "It's time to defund the NYPD by at least $1 billion this year, and invest in housing, harm reduction, healthcare, and social services. We can't wait a second longer as we continue to die from preventable overdoses at historic numbers."