'Day of Rage': Palestinians and Global Allies Rise Up Against Annexation Plan and Israeli Apartheid

"The Palestinian struggle today is not just about fighting annexation, which we must continue to do. It is about dismantling the entire system of apartheid." 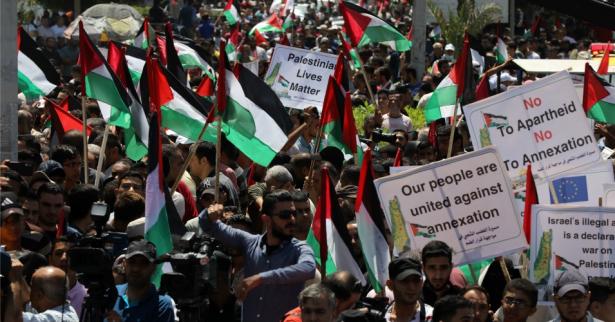 Demonstrators take part in a rally as Palestinians call for a 'day of rage' to protest against Israel's plan to annex parts of the Israeli-occupied West Bank, in Gaza City July 1, 2020., (Photo: Majdi Fathi/NurPhoto via Getty Images)

Palestinians in the occupied West Bank and Gaza Strip—backed by allies across the globe—organized protests on Wednesday against the Israeli government's looming plan to further its apartheid policy by annexing up to a third of West Bank territory under U.S. President Donald Trump's so-called "vision for peace" for the region, which was unveiled in January and championed by Israeli Prime Minister Benjamin Netanyahu.

In Gaza City, the Associated Press reports, thousands of protesters marched with Palestinian flags and signs decrying the annexation plan as a "declaration of war" on the Palestinian people. Following that demonstration, which reportedly ended peacefully in the early afternoon, other rallies were planned in the West Bank.

Protest signs captured by photojournalists said that "Palestinian Lives Matter" and "The annexation is contrary to the U.N. Charter, and a fundamentally illegal act."

The demonstrations in the occupied territories came after Hazim Qasim, a spokesperson for the Palestinian Resistance Movement Hamas, said Tuesday that Hamas and all the other Palestinian factions "are united" against Israel annexing any West Bank territory. Qasim added that Wednesday would be a "day of real rage."

Solidarity rallies and car caravans were planned throughout Wednesday in California, Florida, Illinois, New York, and Oregon. A dozen Democrats in the U.S. House and Sen. Bernie Sanders (I-Vt.) on Tuesday released a letter vowing to oppose further military aid to Israel if its government moves forward with annexing parts of the West Bank.

Solidarity protests were also held outside the U.S. consulate in the South African city of Sandton and in South Korea, the Middle East Eye reported Wednesday. "Protests in Jordan, which has threatened to take action should Israel move forward with its plans," the outlet noted, "have meanwhile been postponed to Saturday, activists said on social media."

After Netanyahu signaled on Tuesday that annexation could be delayed beyond his initial July 1 target date, Regional Cooperation Minister Ofir Akunis told Israel's Army Radio station the process would not begin on Wednesday. He said the Israeli government is still sorting out details with the Trump administration and he now expects the annexation to occur later this month.

The anticipated annexation and Trump's broader plan have drawn sharp critiques from the international community, which considers all existing Israeli settlements in the West Bank illegal. U.N. Secretary-General António Guterres and U.N. High Commissioner for Human Rights Michelle Bachelet, along with politicians and diplomats from various countries, have urged the Israeli government to resist annexation altogether.

If Netanyahu presses ahead with annexation, prominent Palestinian officials fear a definitive end to their already enfeebled statehood project and a future shorn of equal rights of citizenship, where their lives and movements are forever curtailed by the imperatives of the Israeli security state. "It means that I, as a Palestinian, will not be able to do anything without their permission," Saeb Erekat, secretary general of the Palestine Liberation Organization, told my colleague Ruth Eglash. "It means they will control my movements, my planning, my borders and my access to everything. ...They are trying to suffocate me, bury me, and they think I will stand for it?"

Others contend that years of Israeli occupation, land grabs, and settlement expansion in the West Bank and around East Jerusalem had already cemented this reality. "Contrary to the popular narrative, annexation will not kill the two-state solution—you cannot kill something that has long been dead," wrote Yousef Munayyer, a Palestinian American scholar. "Rather, annexation is dragging and displaying the two-state solution's corpse before the world."

"If you ask Palestinians in the Jordan Valley how they feel about annexation, many will tell you that they thought we had already been annexed long ago," wrote Salem Barahmeh, executive director of the Palestine Institute for Public Diplomacy, based in the West Bank city of Ramallah. "This is why we cannot help but ridicule the world's growing, alarmist, and existential outcry as we approach July 1."

Barahmeh, writing for +972 Magazine on Monday, added that "the Palestinian struggle today is not just about fighting annexation, which we must continue to do. It is about dismantling the entire system of apartheid. The world must recognize this reality for what it is, and impose political and economic pressure on Israel to dismantle that system. If the world is more interested in maintaining the current reality because it feeds a convenient façade, then the world itself is complicit."

"Instead of maintaining this grand illusion, what we need now are systematic solutions that build a new social contract between the river and the sea, where everyone can be free with equal rights," Barahmeh concluded. "This is not about who you are or where you [are] from, or whether you are Palestinian or Jewish—it is about the values you stand for. We cannot let another generation of Palestinians grow up under apartheid."