The Voting Disaster Ahead 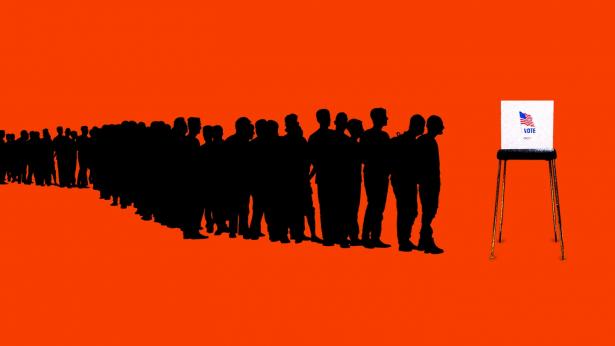 On June 9, primary day, hundreds of people surrounded Park Tavern, a sprawling brewery and restaurant in Atlanta’s Piedmont Park. They queued in six-foot increments, and the line wrapped around the parking lot. Two nearby polling locations were closed, so this was where 16,000 Atlantans were slated to cast their ballots. Across the metro area, more than 80 voting locations had been closed or consolidated over concerns about the coronavirus. What’s worse: The new state-ordered voting machines had stopped working.

Some people waited for more than three hours to vote; others left before casting their ballots. Georgia’s meltdown was not an anomaly. The 2020 primary began with a malfunctioning app in the Iowa caucus, rendering the first-in-the-nation contest moot. One month later, on Super Tuesday, voters met hours-long waits in Los Angeles, Houston, Dallas, and Sacramento. Another month passed, thousands of Americans were dying of the coronavirus, and state officials began canceling primaries. Wisconsin’s state legislature forced its April primary through anyway. Milwaukee voters stood masked in a hailstorm, waiting to vote at one of just five polling places. Any other year would have seen 180 voting locations.

The widespread failures during the primary elections foreshadow a potentially disastrous November election. States such as New York have been racing to make accommodations for voting by mail. But other states are making voting more difficult for residents: Oklahoma is fighting to keep its law requiring that absentee ballots be notarized; Texas will not accept medical vulnerability to the coronavirus as sufficient grounds for absentee voting. Even though greater access to the vote might help a sizable number of Donald Trump’s voters, this opposition to it comes from the top. “Mail ballots, they cheat,” the president has said.

The barriers to ballot access were unacceptable before the pandemic, Leah Aden, an attorney for the NAACP Legal Defense Fund who is actively litigating several voting-rights cases, told me. Black voters, on average, wait 45 percent longer to vote than white voters; Latino voters wait 46 percent longer.* One study, from the American Civil Liberties Union of Florida, found that black and Latino voters in Florida were more than two times as likely to have their mail-in ballots rejected as white voters—because of a mix of voter error and how the state processes ballots. To leave that already flawed system unchanged in a pandemic is injurious, Aden said. “The failure to operate in the context that we’re in, which is a pandemic, and proactively use your resources to address the emergence of that: That is also a form of voter suppression.”

Several states, such as Georgia, Virginia, and Massachusetts, have reported record turnout for their primary elections, and will probably see double to triple that in the general. “It’s likely that we’re not going to fix these problems by November,” Michael McDonald, a professor at the University of Florida who studies elections, told me. “In some cases, there really aren’t any good solutions.”

More polling places will not magically appear. The average poll worker is more than 60 years old—and therefore vulnerable to COVID-19. In Wisconsin, roughly 7,000 poll workers said they would not work during the April election because of their fears of the coronavirus. Voters had to scramble to find new polling places, and figure out ways to get to them. The result? Long lines and a spike in absentee voting.

“Habituation is one of the things that makes people vote,” Henry Brady, who studies electoral politics at UC Berkeley, told me. Some people are encouraged to vote because it’s easy enough to do. In 2011, Brady and a team of researchers examined how changing polling places could affect the outcome of an election—and they found that alternating a location may have reduced voting by as much as 2 percent. Some people voted absentee instead of in person when their polling place was changed—but the study examined California, where an excuse is not required for absentee voting. “You’re probably going to lose a lot more voters in places where vote-by-mail is not as easy.”

During the 2016 primary, residents in Maricopa County, Arizona, faced voting delays of up to five hours. After state officials cut county budgets, Maricopa reduced its number of polling places by 70 percent—from 200 to 60—meaning one polling place was available for every 21,000 voters. Officials in dozens of other states, including Florida, Georgia, North Carolina, and Alabama, similarly closed or changed polling locations. Before the Voting Rights Act was gutted in 2013, each of these states had previously fallen under the section of civil-rights legislation that allowed the federal government to block changes to elections that could adversely impact people of color in places with a history of disenfranchisement. When polling places are closed, many black and brown people are forced to travel farther to vote, at disproportionate rates, according to a report from the Legal Defense Fund.

The pandemic will result in an unusually large number of mail-in ballots come November. And if a voter forgets to sign the ballot envelope, if they sign the envelope but the signature does not match the one on file with the elections office, or even if an election official misreads information that is correctly written, a mail-in ballot can be discarded. In 2016, the United States Election Assistance Commission reported that more than 300,000 mail-in ballots were rejected. “That number could be substantially higher—could be a million or more in 2020—if we don’t take action,” McDonald told me. “And even if we do take action, we’re still going to see an unusually large number of ballots rejected.”

The United States has operated elections amid public-health emergencies before. In 1918, campaigning was upended, public gatherings were limited, and voters were quarantined during the flu pandemic. The scramble to hold a fair election led to some hiccups. In one case, a local election’s outcome was flipped after the votes from an additional polling place—set up to allow quarantined students and teachers in Idaho to vote—were disregarded. The Idaho Supreme Court threw out the ballots, arguing that the polling station was illegitimate.

If history is a guide, America is careening toward a tumultuous November. And if Trump and Republicans want to exploit the pandemic for their benefit in the fall, they may have a public-health excuse for doing so.

Adam Harris is a staff writer at The Atlantic.