"Working people and our movement have to unapologetically claim victory for what we've won, because we want to spread these victories to other cities." 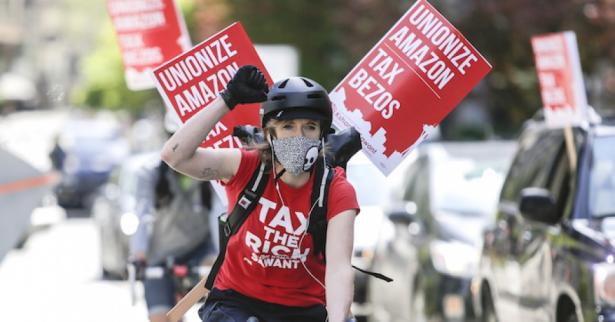 Protesters cycle around the block as they participate in a "car caravan" protest at the Amazon Spheres to demand the Seattle City Council tax the city's largest businesses in Seattle on May 1, 2020., (Photo: Jason Redmond / AFP via Getty Images)

The vote on the JumpStart Seattle plan, proposed last month by Councilmember Teresa Mosqueda, was a veto-proof 7-2. The plan targets corporations with payrolls of $7 million or more and employees with salaries above $150,000, with the measure expected to generate at least $200 million a year. The tax rate corporations would pay ranges from 0.7% to 2.4%. The highest rate—which would affect Seattle-based Amazon—would hit businesses with payrolls of at least $1 billion with salaries of $500,000 per year.

Mosqueda has framed the progressive tax plan as "part of the medicine to address both" the public health crisis and economic crisis, referring to the cornavirus pandemic and resulting damage to the local economy. The revenue generated would fund homelessness prevention programs and rental assistance, immigrant and refugee supports, food security programs, and assistance for small businesses.

"Seattle residents have made it clear—now is not the time for government austerity or divisiveness," Mosqueda said in a statement following the vote.

"We are in the midst of a health and economic crisis that even a strong economy like Seattle may not be able to recover from quickly," said Mosqueda, pointing to the fact that "over a million people statewide... have filed for unemployment this year; countless businesses shuttered temporarily and some potentially forever; our immigrant and refugee families have been left out of federal aid, and our homeless neighbors continue to suffer in our streets in the midst of a global pandemic."

Mosqueda said the proposal would live up to its name because it would "jump start our recovery with a relief plan that centers workers, small businesses, and our most vulnerable community members."

In 2018, the city council passed a so-called "head tax" on large companies—including Amazon—to generate $47 million a year only to see the measure repealed weeks later following a well-funded opposition effort, of which Amazon was at the forefront.  Councilmember Kshama Sawant at the time dubbed the repeal a "cowardly betrayal of the needs of the working people."

Following the new progressive tax proposal's passage Monday, Sawant thanked the movement that made it possible, giving props to "the thousands of working people, unions, socialists!" Sawant also expressed hope that Seattle's action could be a model for other cities to follow.

Councilmember Tammy Morales also said JumpStart could be a model, tweeting: "The Seattle City Council is boldly leading to create a more equitable way to finance public services. And we challenge elected officials at the state level to join us in choosing investment over austerity."

Rep. Pramila Jayapal (D-Wash.) welcomed the vote as well.  "In a city with so much wealth and yet one of the most regressive tax systems, progressive taxation is desperately needed," she tweeted.

"To the big businesses that oppose this: understand that the economic injustice disproportionately hurting Black and brown communities is systemic," Jayapal added. "If you truly believe #BlackLivesMatter, these are the kinds of structural changes that must be adopted to combat racism and inequality."