July 10, 2020 Steven Greenhouse The Guardian
Printer friendly
Workers Fight Back as US Hotels Try to Lay Off Staff and Hire On the Cheap Published July 10, 2020 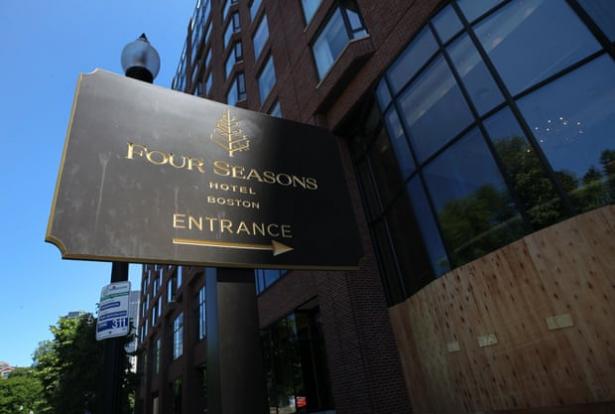 In early March, Antonio Rodriguez, a banquet waiter for 11 years at the luxurious Terranea resort in Palos Verdes, south of Los Angeles, was told he was being temporarily furloughed because of Covid-19. Rodriguez, 58, took that setback in stride, but then in mid-May he received a shocker – Terranea informed him he was being permanently laid off, even though the resort was planning to reopen in June.

“I felt terrible knowing that I was going to lose my job and my benefits. I have three daughters, and now … how am I take care of them?” Rodriguez said. “I don’t know why they’re letting us go and hiring new people. They always say that we are family. This isn’t the way you treat family.”

Some other well-known hotels in California, including the famed Chateau Marmont, have also told longtime employees they have lost their jobs permanently. Several hotels in Baltimore, Phoenix and Boston, including the Four Seasons in Boston, have taken similar moves, sometimes telling dismissed employees that they could reapply for their jobs and, if hired, start out as new employees. These steps have infuriated workers and quickly gotten the attention of many labor leaders and lawmakers.

The result: Los Angeles, Long Beach, and several other California cities as well as Los Angeles county, have enacted legislation requiring hotels (and sometimes other industries) to rehire by order of seniority any workers they laid off because of the pandemic. Similar legislation is moving forward in Oakland and Pasadena, and has been introduced in the Baltimore and Phoenix city councils, although the Phoenix legislation was pulled from the council’s agenda last Wednesday in the face of intense hotel industry opposition. Supporters say such a recall bill will be introduced in the Massachusetts state legislature later this month.

The highest-stakes battle is taking place in Sacramento. In a 44-17 vote, the California state assembly approved a bill that would extend the recall requirement to hotels throughout the nation’s most populous state, but the bill is facing rougher-than-expected sailing in the Democratic-dominated state senate. The legislation would also cover tens of thousands of building service workers, such as janitors, as well as airport workers, such as baggage handlers.

The chief sponsor in the state senate, Maria Elena Durazo, voiced confidence that a majority of senators will rally behind the pro-worker legislation. “What we’re seeing is our worst nightmare,” Durazo said. “These people are being told, ‘Don’t bother to come back. We’ll hire new people, or we’ll rehire you but we’ll treat you as new employees, and we’ll put you on the same level as someone who’s never worked before to make this company successful.’ That’s a horrible shock to every worker.”

Hotels and business groups have lobbied hard to defeat such legislation. While worker advocates see these bills as simple justice, business groups denounce them as heavy-handed, big-government mandates. They say these measures will undermine managerial flexibility and increase costs.

“It becomes this crazy notion of government picking who gets to come back when business comes back,” said Stuart Waldman, the president of the San Fernando Valley Industry and Commerce Association and one of the most outspoken foes of the recall legislation. “The older workers would tend to be more expensive. They might not be the most efficient workers. Anyone who works anywhere knows of co-workers who do a better job. The employer knows which employees do a better job. You might have a more expensive employee or an employee who takes twice as much time.

“If you can only hire back half of your workers, it’s better to let the employer choose which employees they want to hire back.”

The legislation also provides for emergency paid sick days during the pandemic, and protects workers’ jobs if their companies are sold to new owners.

It’s so heartless for an employer to take advantage of a pandemic like this to make an extra buck.  - Julie Kushner

Rosa Franco, who worked for 14 years at a McDonald’s on the Connecticut Turnpike, says she and six co-workers have suffered a fate much like Antonio Rodriguez. “At first they said, ‘We’ll call you back’, but then they didn’t say anything to us for a long time. Then we received a letter saying we’re terminated,” Franco said. “I felt very bad. We’re putting up a fight. We don’t receive paid sick days. We don’t have health insurance.”

She said several of the terminated workers were leaders in a unionization effort. “They wanted to get rid of people who raised their voice,” she said.

Some Connecticut lawmakers have rallied behind the McDonald’s workers partly because the restaurant is on state property. State senator Julie Kushner, a former United Automobile Workers official, said: “It’s so heartless for an employer to take advantage of a pandemic like this to make an extra buck.” Kushner said she planned to introduce recall legislation like that enacted in Los Angeles, but also protecting restaurant workers. The McDonald’s franchisee has denied retaliating against the workers for wanting to unionize.

Kurt Peterson, co-president of Unite Here Local 11, the hotel workers’ union local in southern California, said the legislation was modeled after a recall law enacted in Santa Monica to protect the jobs of longtime hotel workers after the September 11 terrorist attacks. With tourism and travel hobbled, several Santa Monica hotels angered workers and lawmakers when they laid off many senior workers while retaining junior workers and hiring some new workers.

Speaking about the layoffs at high-end properties like Terranea, Peterson said: “Maybe you’d expect this to happen at Motel 6. But this isn’t right. I don’t know what their exact motives are. These places are always looking for the young and beautiful. I think they were looking to rebrand themselves and reopen with a whole new set of workers.”

Last Wednesday, fired Terranea workers held a protest outside the headquarters of the real estate company that owns the resort. They called for “a just recovery”. In a statement, Terranea acknowledged it had terminated about half of the 1,100 workers who had been furloughed.

“Fortunately, we have begun to recall some furloughed employees with our reopening on June 19, and we will continue to do so moving forward as business levels permit,” Terranea said, adding that it would “rehire laid off employees should we have the opportunity to do so”.

Terranea said it opposed the statewide recall legislation “due to the unnecessary, onerous, and stringent process it requires for employers to return employees to the workforce”.

Ron Herrera, president of the powerful Los Angeles County Federation of Labor, said unions would continue to fight for the legislation.

“It’s one of the best labor policies that have come out in years,” he said. “It really helps workers who are in dire straits. It gives them hope knowing that their job will be waiting for them when the economy and their employers gear everything back up. It really provides hope. That’s huge.”