The strike for Black Lives highlights the fundamental link between worker rights and racial justice. This growing alliance also addresses the dual role of police in repressing both worker organizing and black and other communities of color. 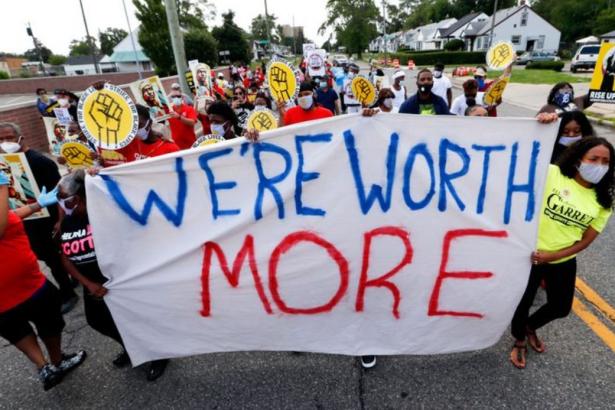 Protesters march outside a McDonald’s in Detroit. The national workers’ strike, dubbed the Strike for Black Lives, saw people walk off the job on Monday in U.S. cities to protest systemic racism and economic inequality.,Paul Sancya/AP/Shutterstock

On July 20, workers across the country participated in a one-day strike for Black Lives.  Fast food workers, ride share drivers, home care workers, janitors, and graduate student researchers all stood in solidarity with the movement for Black Lives.

The strike for Black Lives highlights the fundamental link between worker rights and racial justice. This growing alliance also addresses the dual role of police historically in repressing both worker organizing and black and other communities of color.    Workers, especially workers of color, have been the target of police repression in their fight toward justice.

In the past few months, more than 700 overwhelmingly nonviolent protests have been organized throughout the country in response to the killing of George Floyd and other unarmed black women and men.  This movement has triggered a long overdue debate on systemic racism within our society and the role of police in defending white supremacy and corporate domination.

Thirty years ago, on June 15, 1990, members of the Los Angeles Police Department (LAPD) violently beat a peaceful group of Latina/o janitors in Century City who were marching for better wages and working conditions. As a result, dozens of janitors were hospitalized, one woman suffered a miscarriage, and dozens more were arrested and jailed. By numerous accounts, this was a “police riot.” The LAPD paid a multimillion-dollar settlement in response to the injured janitors’ lawsuit.

The police attack in Century City took place the year before a more famous LAPD abuse case involving motorist Rodney King. Millions saw the televised video of the police beating Rodney King as he lay on the ground. When the police were acquitted by a mostly white jury, the verdict triggered the 1992 Los Angeles civil unrest.

The LAPD beating of the janitors is not an isolated case of police repression of workers. In the agricultural fields of California, growers have called in law enforcement agents to attack and beat striking farmworkers. During the 1992 Drywall Strike that paralyzed the home construction industry in five Southern California counties, law enforcement agents harassed and arrested the striking workers. Many were jailed for unrelated issues, like unpaid parking tickets or their undocumented immigration status. During the 2007 May Day march, the LA police used rubber bullets and tear gas on peacefully protesting immigrant workers; among the injured were families with young children and journalists.

The role of police repression directed against workers has a long and sordid history. The first state police force was established in Pennsylvania at the demand of factory owners who wanted to suppress striking coal miners and steelworkers. And for decades, private security guards known as “Pinkertons” infiltrated unions and notoriously worked hand in hand with law enforcement to crush strikes and attack workers.

During the 1930s, hundreds of workers were killed by law enforcement agents and the national guard during labor disputes. In one publicized incident known as the Memorial Day Massacre of 1937, police opened fire on striking steelworkers marching peacefully in Chicago. Dozens were shot, more than a hundred were beaten, and ten workers were killed by the police.

In the 1960s, law enforcement brutally suppressed peaceful protests during the freedom struggle in the South. Hundreds were beaten, many were killed, and thousands more were jailed. Congressman John Lewis nearly died after a savage beating by law enforcement on the Pettus Bridge in Selma, Alabama; fittingly, the bridge was named after a Confederate general. In 1968, police again violently attacked a march led by Dr. King in support of the Memphis Sanitation Workers strike. A few days later, he was assassinated while supporting the sanitation workers.

Dr. Martin Luther King Jr. said, “The labor-hater and labor-baiter is virtually always a twin-headed creature spewing anti-Negro epithets from one mouth and anti-labor propaganda from the other mouth.” Today another twin-headed creature resides in the White House; Donald Trump has made clear his animosity toward both people of color and labor.

On June 1, 2020, Trump directed the police to attack a thousand peaceful demonstrators in front of the White House. The federal police used rubber bullets and tear gas to disburse the crowd so Trump could hold a staged press event in front of a church. Trump held a bible upside down in one hand while directing violence against people peacefully protesting with the other. The church is located on the same block as the national headquarters of the AFL-CIO. Donald Trump’s message was clear. He will not hesitate to mobilize law enforcement to attack communities of color and workers alike.

The July 20th strike for Black lives advances a growing movement to advance racial justice and economic justice.  Communities of color will never achieve liberation if poverty, homelessness, and low wage jobs are the norm.  Workers demand the right to unionize and labor rights that have been undermined by right wing court.  Workers demand a healthy and safe work environment, and oppose corporate greed that prioritizes profits over people and threatens worker lives on the job.

We need to transfer funds from the police, the prison system, and the military and to support human needs.  We need to build sustainable communities, and a massive investment to fund public education, health care, housing, transportation, and mental health and substance abuse services.  This is what will secure the long-term safety and security of our communities.   The system of violence and repression promoted by Donald Trump and the corporate elite will never ensure equality, liberty and justice for all.  People of conscience stand united in envisioning the “beloved community” embraced by Dr. King.

Kent Wong is the director of the UCLA Labor Center.  The two have been teaching a course on Nonviolence at UCLA for the past eighteen years.]