This is a moment to revisit this important book. "Snyder is calling for moral courage," writers reviewer Early. "Don’t be afraid to stand out. Don’t obey immoral orders. Don’t abandon professional ethics. Don’t forget to vote." 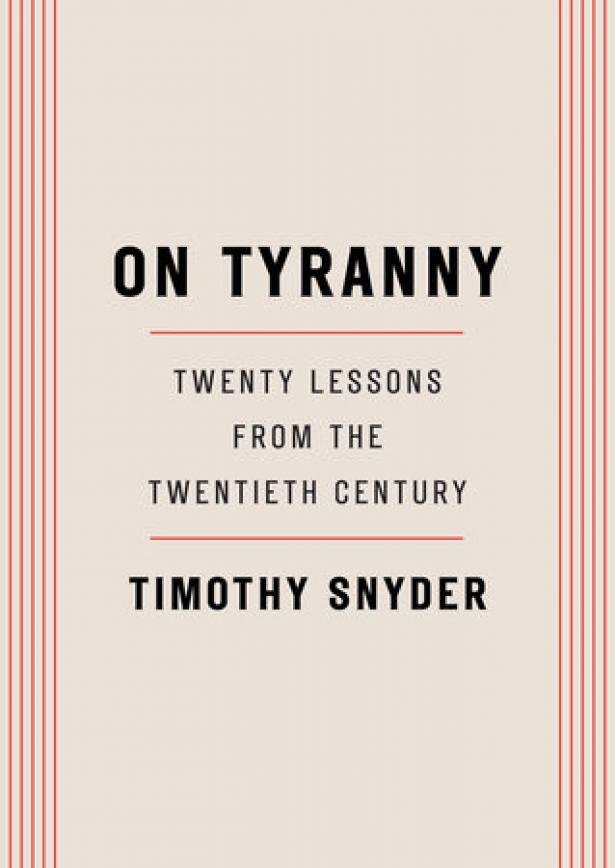 ‘History does not repeat, but it does instruct.” So begins this book by the Yale historian Timothy Snyder, a specialist on eastern Europe. On Tyranny is his response to the rise of Donald Trump, although it is not, strictly speaking, about Trump, who is never mentioned by name. It is, rather, a primer in how to think historically.

One of our big problems, as Snyder sees it, is that most of us don’t think historically at all. He describes two pervasive anti-historical modes of thought. The first, which he calls the politics of inevitability, is “the sense that history could move in only one direction: towards liberal democracy . . . expanding globalisation, deepening reason, increasing prosperity”.

This “self-induced intellectual coma” enveloped the West after the break-up of the Soviet Union, whose official ideology also taught that history moved, as though on rails, toward the inevitable destination of the workers’ paradise. Communism’s sudden collapse should have taught the West to beware of heedless assumptions and complacent fatalism. Instead “we drew the wrong conclusion . . . We imagined that our own story was true.”

Snyder’s other anti-historical mode is the politics of eternity, the nostalgic nationalism of Trump, Nigel Farage and Marine Le Pen. “Its mood is a longing for past moments that never really happened during epochs that were, in fact, disastrous.”

History is understood as an eternal struggle of us against them; the past is a repository of myth and grievance, to be ransacked for stories that seem to reiterate the core ideas of national virtue and foreign perfidy. “The seduction by a mythicised past prevents us from thinking about possible futures . . . We stare at the spinning vortex of cyclical myth until we fall into a trance.”

Clearing the way for tyranny

Snyder argues that nothing is inevitable. Understanding the past gives us the chance “to be responsible: not for everything, but for something”. In 20 short chapters he describes ways in which individuals can take responsibility to resist authoritarianism’s rise.

In the main Snyder is calling for moral courage. Don’t be afraid to stand out. Don’t obey immoral orders. Don’t abandon professional ethics. Don’t forget to vote. Each principle is illustrated with historic examples. The Nazis’ final solution could not have been implemented without the skills of obedient lawyers, doctors and bureaucrats. The Soviet famine of the 1930s was foreshadowed by propaganda posters depicting strong farmers as pigs ready for slaughter.

For those sceptical that American democracy really is in crisis Snyder points to an ominous aspect of the current political landscape: “The less popular of the two parties controls every lever of power . . . proposes few policies that are popular with the society at large, and several that are generally unpopular – and thus must either fear democracy or weaken it.”

Meanwhile, the common basis of public debate has disintegrated. One group has what it takes to be facts; another group has alternative facts. “As observers of totalitarianism such as Victor Klemperer noticed, truth dies in four modes, all of which we have just witnessed.”

There is “open hostility to verifiable reality”, as seen in almost any Trump tweet. We’ve seen the “shamanistic incantation” of thought-bypassing nicknames and slogans: Crooked Hillary, build that wall, lock her up. We’ve seen magical thinking, as when millions of voters believe a candidate’s promises to simultaneously cut taxes, boost spending and eliminate the national debt. And we’ve seen the spread of unquestioning faith in a leader prone to self-deifying statements, such as “I alone can solve”. “Post-truth,” Snyder writes, “is pre-fascism.”

A system thus enfeebled is vulnerable to external shock, and the author is confident that such a shock is on the way. “When the terrorist attack comes, remember that authoritarians exploit such events in order to consolidate power.” The Reichstag fire of 1933 is the classic example of an event that catalyses the authoritarian turn.

A similar pattern can be seen in the recent history of Russia, where a series of terrorist crises – the apartment bombings of 1999, the Dubrovka theatre attack of 2002, the Beslan school siege of 2004 – saw the systematic dismantling of institutional obstacles to executive power.

This “terror management”, Snyder says, must be recognised and resisted. But, plainly, resistance is more complicated than recognition. The fundamental point about authoritarians is that they are prepared to kill you, and the 21st-century security state is equipped with a reach and power undreamt of by tyrants of the past.

Against tyranny of sufficient ruthlessness, resolution in the habits of decency will not be enough. Snyder alludes to this in his final, shortest chapter, reproduced here in its entirety: “Be as courageous as you can. If none of us is prepared to die for freedom, then all of us will die under tyranny.”