Owners like Kelly Loeffler, Dan Snyder and Woody Johnson shouldn’t be pushed out for their views, but for their behavior if that behavior promotes hate toward marginalized groups 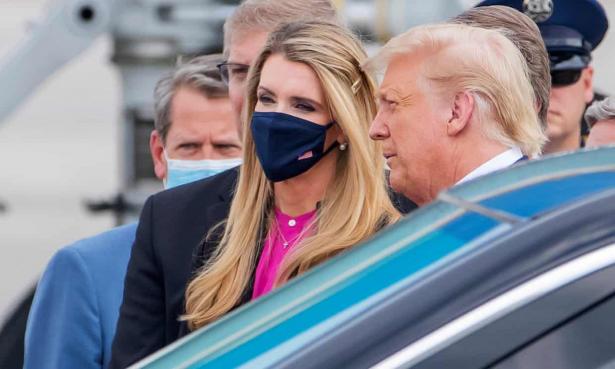 Georgia senator Kelly Loeffler, a close ally of Donald Trump and co-owner of the WNBA’s Atlanta Dream, thinks players seeking social justice may put off some fans, which is a bottom-line analysis rather than a passion to do the right thing, Erik S Lesser/EPA

Not all monuments to our racist past are made of bronze or flutter on flagpoles. In sports, the offensive monuments are clueless owners of teams who may look like flesh and blood, but when it comes to embodying the racism of those hastily removed Confederate generals, they still sit high upon their pigeon-befouled pedestals. They are as frozen in time and as impervious to social change as their metal counterparts.

The recent mass protests across the country calling for racial equity seems to have achieved some progress toward the elimination of systemic racism. Public statements were issued. Money was donated. Pledges were made. In the sports world, many teams spoke out eloquently in support of Black Lives Matter and launched programs to prove their sincerity. The professional sports world has tapped into the overwhelming and very public zeitgeist of protestors seeking equity for all. But, as many long-time activists like myself have warned, we have to be careful of those owners who seem to be biding their time for all this social consciousness to be gone with the wind.

The NFL’s non-response to allegations that Woody Johnson, Jets owner and Trump-appointed ambassador to the UK, consistently made racist and sexist comments is a clear indication why black Americans need to remain guarded when counting up the members of their team. On 4 June 2020, NFL commissioner Roger Goodell issued a statement admitting the NFL was wrong in not supporting peaceful protest. But the NFL’s response to Johnson’s racism is this terse email: “We are aware of the report and would refer you to the State Department.” Yup, that’s the whole thing. If they really wanted to demonstrate their commitment to rooting out racism in their own ranks, they should have issued this statement: “An urgent non-partisan investigation needs to be conducted. If the allegations prove true, Woody Johnson should be immediately withdrawn as ambassador because he does not represent the highest values of the United States Constitution or the American people. And he should be removed as a team owner because he does not meet the NFL standards of inclusivity, decency, and respect for others.” It’s not that hard to be consistent in your support of what’s right and just. Just don’t check with your accountant first.

Dan Snyder, the owner of Washington’s NFL team, has long been under attack for his racial insensitivity and cultural tone-deafness. In 2013, he told a USA Today reporter, “We’ll never change the name. It’s that simple. NEVER – you can use caps.” He actually fought for his right to insult Native Americans all the way to the US Supreme Court and won. Not until this year, after weeks of national protests about racial inequities, did investors and sponsors like FedEx, Nike and PepsiCo apply enough pressure for Snyder to agree to the name change, now temporarily called “Washington Football Team”.

But, if the Snyder reign of racism is on sabbatical, it now faces accusations of misogyny as 15 former employees and two journalists charge former team officials with sexual harassment and verbal abuse. Although Snyder has not personally been cited, Shaunna Thomas, co-founder of the women’s advocacy group UltraViolet, issued this statement: “Daniel Snyder has enabled, encouraged and fostered a hostile workplace and toxic culture for women. He must go. If the NFL is serious about cleaning up its act, they will force Snyder to sell the team.” NFL insiders agree that his removal is unlikely since he wasn’t directly involved. An investigation is taking place and Snyder has vowed to set “a new culture and standard for our team”. Maybe. He didn’t seem to endorse any cultural standard when he ignored Native American protests for so long. 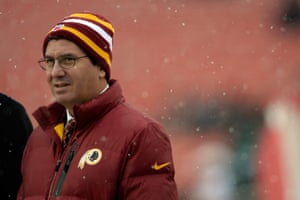 Dan Snyder, the owner of Washington’s NFL team, has long been under attack for his racial insensitivity and cultural tone-deafness. Photograph: Patrick McDermott/Getty Images

Georgia senator Kelly Loeffler, a close ally of Trump and co-owner of the WNBA’s Atlanta Dream, thinks players seeking social justice may put off some fans, which is a bottom-line analysis rather than a passion to do the right thing. Loeffler reads from the same dog-eared playbook of most racists-in-denial pontificating from their plantation porch. She first claims she’s not racist, then delivers massively inaccurate justifications for being selectively racist: “There’s no room for racism in this country, and we have to root it out where it exists. But there’s a political organization called Black Lives Matter that I think is very important to make the distinction between their aim and where we are as a country at this moment. The Black Lives Matter political organization advocates things like defunding and abolishing the police, abolishing our military, emptying our prisons, destroying the nuclear family. It promotes violence and antisemitism. To me, this is not what our league stands for.” It’s disturbing that she doesn’t know (or does know and prefers lying) that Black Lives Matter is not a monolithic organization but an affiliation of activist groups. She chooses to spout fear-inducing lies to rally racists: Abolish police? Abolish military? Empty prisons? Destroy the nuclear family? Being truth-challenged is one reason the WNBA players’ association has asked the commissioner to remove Loeffler as a co-owner.

If we were to “root it out where it exists”, we would start with Loeffler, Dan Snyder and Woody Johnson. Which brings up the question of what to do with racists who own sports teams. Loeffler insists, “They can’t push me out for my views. I intend to own the team. I am not going.” I agree that owners shouldn’t be pushed out for their views, but for their behavior if that behavior promotes hate toward marginalized groups, because we know that such hate often leads to violence against them. Even when it doesn’t directly lead to violence, it perpetuates the lies and prejudices that allow people to ignore the inequities in education, health, voting and jobs that these people face. Which is why we need to call them out publicly and relentlessly, if not to change their minds, then to change their public behavior.

If owners want to keep their teams, they should keep their racist, misogynistic, homophobic and xenophobic views to themselves. Once they choose to state them publicly, they are knowingly attempting to influence people’s opinions and actions. If that influence fuels hatred and prejudice, they deserve to be pulled down along with all the other vile and outdated monuments to injustice and self-interest. And whenever they speak out on their commitment to racial equality, we have to remember what James Baldwin said: “I can’t believe what you say, because I see what you do.”

Kareem Abdul-Jabbar is an American icon, legendary NBA champion and recipient of the 2016 Presidential Medal of Freedom. His latest book Mycroft & Sherlock Holmes - the Empty Birdcage is his third novel in true Victorian style

Get the whole picture from a source you trust, emailed to you every morning -- The Guardian newsletter