Over a dozen workers at Whole Foods stores in four states claim in a class-action lawsuit that the company retaliated against them for wearing the movement’s apparel. 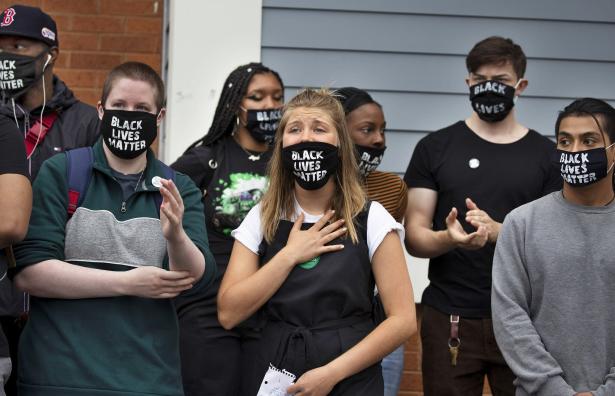 From colorful patterns and vegetable prints to SpongeBob SquarePants, creative masks have been embraced by Whole Foods employees across the country since the pandemic began.

But according to 14 employees at Whole Foods stores in California, Massachusetts, New Hampshire and Washington State, the company drew the line at Black Lives Matter masks, apparel and pins. The workers were sent home without pay, subjected to “corrective” discipline and threatened with the loss of their jobs for refusing to remove the items, a class-action lawsuit filed on Monday in Federal District Court in Massachusetts said.

The company, which is owned by Amazon, did not enforce its dress code policy when employees wore messages on masks and apparel expressing support for other entities and causes, such as sports teams and L.G.B.T.Q. rights, the lawsuit said.

One of the workers, Savannah Kinzer, was fired on Saturday from her job in Cambridge, Mass., for wearing a Black Lives Matter mask and for protesting Whole Foods’ “discipline of employees” for doing so, the lawsuit said. She also encouraged co-workers to wear the masks.

“Whole Foods employees across the country have been prohibited from wearing Black Lives Matter masks and other related apparel at work,” it said.

In a statement, Whole Foods denied that any employees had been terminated for wearing Black Lives Matter face masks or apparel.

It said Ms. Kinzer violated time and attendance policy “by not working her assigned shifts, reporting late for work multiple times in the past nine days and choosing to leave during her scheduled shifts.”

The lawyer representing the plaintiffs, Shannon Liss-Riordan, said Ms. Kinzer was escorted out after telling her manager that she had filed charges with the Equal Employment Opportunity Commission and the National Labor Relations Board, federal agencies that support workers’ welfare and prevent discrimination.

“We are asking that the court order Whole Foods to allow the employees to wear the Black Lives Matter masks and other apparel at work,” she said, referring in an email to the pins, masks and messages on sneakers.

She said the employees were also asking for the disciplinary action against them to be reversed and for back pay.

Whole Foods’ dress code prohibits visible slogans, messages, logos and advertising that are not company-related on any article of clothing.

A statement from the company said its dress code policy is meant to “prioritize operational safety” and to keep the focus on customer service.

“While we cannot comment on pending litigation,” the company said, “it is critical to clarify that no team members have been terminated for wearing Black Lives Matter face masks or apparel.”

“We have zero tolerance for retaliation at Whole Foods Market,” it continued. “We recognize, respect and take steps to ensure we do not impinge on employees’ legal rights.”

Black employees of Whole Foods and their co-workers began wearing Black Lives Matter masks in June, as protests against police violence and racism swept the country after the death of George Floyd, the lawsuit said.

The lawsuit highlights the emerging tensions as American businesses and their employees navigate protests against systemic racism amid the upheaval caused by the growing coronavirus pandemic, in which Black Americans are dying at about twice the rate of white Americans.

While major companies tend to be wary of offending customers by associating their brands with sensitive subjects, many corporations, including Nike, Twitter and Citigroup, took public stances against racial injustice and police violence after Mr. Floyd’s death in Minneapolis police custody in May.

Companies have also tried to meet the needs of workers who endure hostility from customers who are denied service for not wearing masks.

Last month, Starbucks said employees would be allowed to wear Black Lives Matter shirts and pins, a sudden reversal of a policy that had banned the phrase because it could “amplify divisiveness.”

The lawsuit said that Whole Foods and Amazon had each posted online messages supporting Black Lives Matter and condemning racism. But it claimed that the company’s dress code policy had not been enforced against apparel endorsing L.G.B.T.Q. Pride or expressing political or social slogans the same way it had been against workers’ Black Lives Matter paraphernalia.