What About the Back Rent?

State eviction moratorium may only delay the reckoning for tenants  . 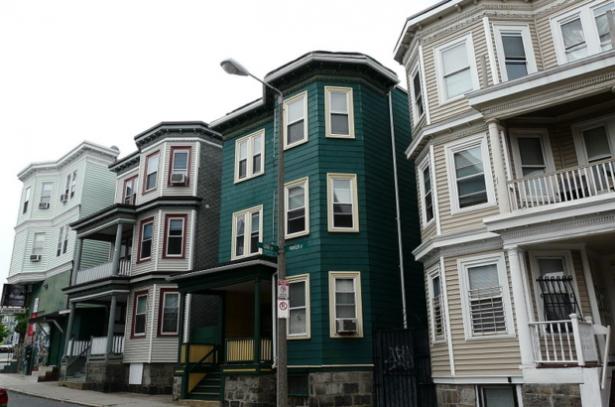 A street of Boston three-deckers.,

THE EXTENSION THIS week by Gov. Charlie Baker (MA) of a statewide eviction moratorium to mid-October provides two more months of breathing room for tenants. The eviction freeze, put in place in April to respond to the surge in unemployment from the coronavirus shutdown of the economy, had been due to expire on August 18.

But as the months of pandemic-related disruption drag on, tenants are accruing thousands of dollars of debt. The moratorium doesn’t forgive back rent, it only halts evictions for the time being. With many tenants who have fallen behind unlikely to be able to come up with the huge payments that will come due, housing advocates are fearing an eviction tsunami when the moratorium expires.

Massachusetts housing courts are estimating 20,000 eviction filings as soon as the ban lifts.

Coronavirus shutdowns slowed the economy to a standstill this spring when employers laid off, furloughed, and cut the hours of over a million Massachusetts renters and homeowners. Many residents continued to pay some or all of their rent with unemployment monies, which are often only a fraction of typical weekly pay. But as supplemental federal unemployment benefits of $600 per week end July 31, tenant hardship is about to go from bad to worse.

The Metropolitan Area Planning Council estimates 65,000 renter households and 55,000 owner households receiving unemployment benefits are at risk of eviction or foreclosure without housing assistance after this benefit ends.

In April and May, 29 percent of Massachusetts tenants missed at least some of their rent payment, according to a statewide survey in late May by the MassINC Polling Group. The poll suggested the situation could worsen considerably, with 60 percent of tenants saying they would have trouble making full rent payments if the crisis lasts six months or longer.

Of those who missed at least some of their rent payment, only 35 percent had worked out a rent modification plan with their landlord, and just 21 percent said it was “very likely” they could catch up with all past rent payments by the end of the moratorium, which was slated at the time for August 18.

The statewide moratorium halts most eviction and foreclosure proceedings unless a tenant poses a threat to the health and safety of others. Landlords are barred from charging late fees for nonpayment of rent and providing credit data to consumer reporting agencies if renters can prove within 30 days of a missed payment that their financial hardship is due to income lost as a result of the coronavirus pandemic.

Boston Rep. Kevin Honan and Cambridge Rep Mike Connolly recently  filed legislation to continue  the moratorium for a year after the end of the governor’s declaration of a state of emergency. Their bill would also let landlords defer mortgage payments for the same period, and those with fewer than 15 units would have priority for new state aid the legislation would make available to property owners.

But how tenants, who already tend to be much more financially unstable than homeowners, will be able to dig out from thousands of dollars in back rent debt when the moratorium ends is the big question. And tenant advocates aren’t the only ones asking it.

“It’s really hard for tenants who were barely making ends meet before,” said Douglas  Quattrochi, executive director of the trade group MassLandlords. “Now all of a sudden they’re going to  come up with three months of rent? No, I don’t think so. They’d have to win the lottery.”

That describes the situation Victor Franco and his family are now facing.

The 26-year-old Brighton resident shares a three-bedroom apartment in an affordable housing complex with his mother, infant daughter, and three younger sisters and brother. The family has over $5,000 of unpaid rent from May to July.

Franco said the landlord, Mainsail Management Inc, is demanding they go on a payment plan, but hasn’t  suggested what that would look like.  He’s reluctant to commit to a set monthly payment. “We just want to send him whatever money we can pay,” he said.

Their building is a private complex overseen by the Boston Housing Authority but managed by Mainsail. The company didn’t respond to inquiries about Franco’s situation.

Franco said the once manageable $1,675 monthly rent payment is now beyond their means. Franco, who was laid off from his job as a paraprofessional working with students with special needs, just started collecting unemployment. The restaurant his mother worked at was shut down after the pandemic broke out. It’s now reopened at reduced capacity, but she’s afraid to go back because she has severe asthma.

While Franco and other tenants fall behind, tenant advocates worry that landlords will want full payment of back rent as soon as the moratorium ends, or quickly look to start eviction proceedings.

“We know they want a check for the exact amount, and that they’re willing to use evictions to get that,” said Lisa Owens, executive director of the advocacy group City Life/Vida Urbana. The few landlords she’s come across that are allowing payment plans are owner-occupants with few units.

The eviction moratorium has not gone over well with lots of landlords. It is being challenged in a  lawsuit  filed by property owners asking the state’s Supreme Judicial Court to overturn the moratorium, calling it unconstitutional.

Landlords wonder if they’ll have to swallow ongoing costs during lengthy and expensive housing court proceedings. There’s also a debate within the landlord community over whether negotiating payment plans with tenants is worth it.

WinnCompanies, the state’s largest affordable housing landlord, recently extended its own eviction moratorium through the end of the year, two and half months beyond the new statewide deadline. “This extension is aimed to give them time to get back on their feet and pay the rent that is due,” said company CEO Gilbert Winn.

The moratorium applies to the 6,500 apartments Winn owns (it manages 18,000 more). Winn recognizes affordable housing landlords are in a better position than small landlords. “In no way is this an indication that every landlord is in the position to do this,” said Winn.

A tenant in a market rent apartment, he said, would be paying far more a month. Landlords may be more dependent on those larger payments to meet their own mortgage payments and other expenses, and tenants can quickly amass huge back rent debt that’s hard to overcome.

Quattrochi  of MassLandlords said in rare situations payment plan situations have gone smoothly, but they’re not the norm, and they also often leave landlords high and dry.  “The renter agrees to pay something like 50 bucks a month, and these payment plans stretch for up to five or six years,” he said. Quattrochi  said most landlords don’t have the financial resources to wait that long.

Greg Vasil, CEO of the Greater Boston Real Estate Board, said communication between tenant and landlord is key during the crisis.

“There’s been a number of tenants that have just gone silent because they think they just don’t have to pay,” said Vasil. “Unfortunately, when this ends, they’re going to have an arrearage because they haven’t kept dialogue open with the landlord,” he said.   “Just say, ‘Hey here’s my situation. I worked at Marshall’s and I lost my job and they’re not bringing me back. I can’t wait on tables on nights and weekends at my other job for extra money. What do I do?”’

Even if a tenant doesn’t want to enter into a payment plan, Vasil said, that’s where they might end up anyway. “No judge is going to put a tenant on the street for economic hardship for COVID  without saying, ‘You guys gotta come together for a payment plan,’” he said.

As helpful as the moratorium extension is for struggling tenants, it doesn’t address the big question of whether there are solutions that will get back rent paid rather just delaying the day of reckoning.

Quattrochi has proposed having the state issue surety bonds, which landlords could apply for and which would guarantee rent payment if tenants affected by COVID-19 disruptions fall behind. “The state really needs to cover the costs of this because the state shut businesses down,” said  Quattrochi. The idea hasn’t been picked up by legislators.

The biggest help with rent payments has come from state and federal assistance programs.

On July 1, the Baker administration announced a $20 million emergency rental and mortgage assistance fund, which uses federal funds to help lower-income households. An additional $18 million was made available through the Residential Assistance for Families in Transition (RAFT) homeless prevention program, which can also be used for rent or mortgage payments. Through both funds, mortgage lenders and landlords receive payment directly from the state, and can’t evict tenants.

On Friday, Baker signed a recently passed $1.1 billion supplemental budget plan focused on COVID-19 costs, which includes $20 million in additional RAFT funding and increases the amount households are eligible to receive to $10,000.

In his letter to the Legislature extending the eviction moratorium, Baker “strongly encouraged” residents to continue making rent and mortgage payments to the extent they are able. He said the administration will explore whether more state and federal resources are needed for renters before the new moratorium expiration date in October.

Several dozen cities and towns have also launched programs to aid renters. A recent survey conducted by the state Department of Housing and Community Development and the nonprofit housing organization CHAPA identified 48 communities that were making funds available to tenants, with priority for households with children, seniors, and loss of income due to COVID-19.

Boston’s $8 million rental relief fund, subsidized by federal stimulus monies, received 845 resident applications and had distributed $1.1 million to 347 households as of July 10, with an average award of $3,200. Eligible households get about the average of two month’s rent. The rest of the applicants are still being screened.

The Metropolitan Area Planning Council estimated that 18,000 households in Boston are having a difficult time paying their rent.

Franco, the Boston Housing Authority tenant in Brighton, applied for funds through the city program, but hasn’t heard back about the application.

A week before Baker extended the statewide eviction moratorium, the housing authority announced it was extending its own eviction moratorium. “I almost cried because it gives us more cushion room to figure out our options,” Franco said. But when it comes to the unpaid rent, “it’s just one big mess,” he said, adding that his mother has panic attacks when he brings up the issue.