"With additional decarceral efforts, many further infections can be prevented in the... cities analyzed and many others." 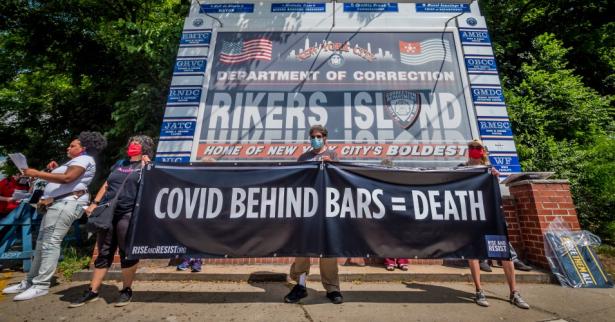 An ACLU report released Monday uses data from 29 locations across the United States to bolster an argument that rights advocates have made throughout the coronavirus pandemic: Immediate action must be taken to decrease jail and prison populations to reduce the threat Covid-19 poses to those in carceral facilities and their surrounding communities.

The U.S. remains a global hotspot for Covid-19, with over 4.2 million confirmed cases, nearly 147,000 deaths, and tens of millions of people newly unemployed due to the corresponding economic fallout. In the midst of the related crises, advocacy groups including the ACLU have warned that the country's crowded and often unsanitary caceral facilities are "ticking time bombs" that endanger both those who are locked up and the staff.

The new report, Decarceration and Crime During Covid-19, says that although no carceral system in the country has gone far enough yet, some states and localities have taken steps such as reducing low-level arrests, setting bail to $0, and releasing certain incarcerated individuals who are medically vulnerable or had served most of their term. Some GOP policymakers, citing public safety concerns, have pushed back against the practices.

The ACLU Analytics team's report challenges those concerns. The researchers found that nearly all of the 29 communities analyzed had reduced their county jail populations between the end of February and the end of April, and "that the reduction in jail population was functionally unrelated to crime trends in the following months."

The team found that in most communities, "fewer crimes occurred between March and May in 2020 compared to the same time period in 2019, regardless of the magnitude of the difference in jail population." They also found that compared with trends from previous years, there was no evidence of spikes in crime in any of the places studied.

As the ACLU report explains:

The team's findings were in line with recent reports that documented certain types of crime have gone down during the Covid-19 pandemic, which many attribute to stay-at-home orders and decreased overall activity. City-level crime trends are complex and influenced by many factors, including temperature, with crime rates typically rising in the summer months. The analysis confirmed that the amount by which a county changed its jail population wasn't correlated with the amount of change in crime.

This confirmation comes at a time when reducing jail populations is urgently necessary. The epidemiological model the ACLU developed in partnership with academics in April illustrated the profound risk Covid-19 presents to people in carceral facilities and their surrounding communities. The model found that swift action to reduce jail populations could save lives, but inaction could lead to an estimated 100,000 deaths in jails and the surrounding communities. Since then, Covid-19 has continued to spread rampantly through jails, prisons, and immigration detention centers—more than 50,000 people in prison have tested positive for the coronavirus, and over 600 have died. Further research has confirmed what we feared: Cycling through a jail is one of the largest risk factors for Covid-19 transmission. For Black and Brown people already disproportionately harmed by the criminal justice system, this system only exacerbates Covid-19's unequal impact.

In a statement announcing the new findings, Cynthia Roseberry, deputy director of the ACLU's Justice Division, said that "even with the decarceral efforts outlined in the report, local and state governments have been doing much less than what is necessary to stop the spread of Covid-19 in jails and prisons."

"This data shows that there no excuse for these actors to refuse to take the steps necessary to protect people in prison," she declared. "With additional decarceral efforts, many further infections can be prevented in the... cities analyzed and many others."

Roseberry added that "any and all policies to reduce arrests and just as importantly release people who are currently incarcerated and vulnerable to Covid-19 should continue indefinitely, without worry that the release of incarcerated people will result in an increase in crime in the surrounding communities."

"In response to the pandemic, the ACLU has embarked on one of the largest legal and advocacy mobilizations in our history," a pair of attorneys from the group detailed in a Monday blog post. "Alongside our affiliates and partners, we have filed over 30 lawsuits and pressed advocacy in every state to release vulnerable detainees and force officials to implement social distancing, augment hygienic practices, and expand testing."

Other advocates also continue to demand action at the national level. In a piece published last week by the Brennan Center for Justice at New York University Law, senior counsel Taryn A. Merkl wrote that "in the next Covid-19 legislation package, Congress should include relief for our nation's incarcerated population, including funding to support the states in this effort, as well as legal changes that will more readily permit incarcerated people to bring their cases to federal court for review."

Anticipating a new coronavirus proposal from Senate Republicans on Monday that lacks any such measures, Kara Gotsch, director of strategic initiatives for the Sentencing Project, said in a statement that "delays by Congress to reduce levels of incarceration, by releasing elderly people and those with health conditions, risks the lives of thousands of people unable to protect themselves from Covid-19. Incarceration during this pandemic for the most vulnerable is cruel and too often deadly."

The Marshall Project, which is collecting data on Covid-19 infections at U.S. state and federal prisons in partnership with the Associated Press, reports that there have been at least 70,717 confirmed cases and 713 deaths among detainees through July 21. Nearly a fifth of all infections—13,454—have been recorded in Texas, which is among the states that have conducted mass testing in prisons. The federal carceral system ranks second to Texas with 10,154 cases followed by California with 7,066 cases.