Israeli settlers, hoping to beat Trump’s “Deal of a Century” plan to the punch, occupied the West Bank village of Battir. Under Trump’s plan Battir would remain Palestinian, so armed settlers are moving to create irreversible “facts on the ground.” 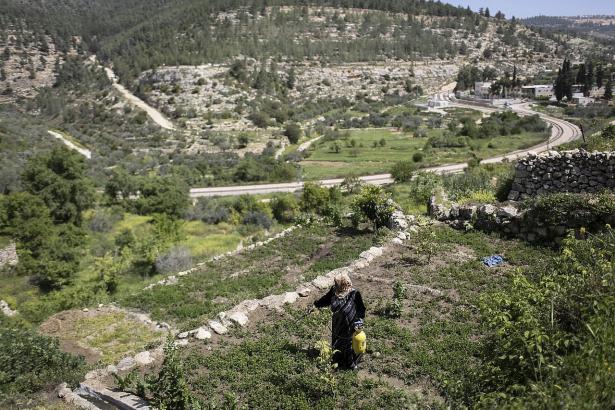 Khaled and Miriam Muammar live in Battir, an agricultural village in the occupied West Bank, just south of Jerusalem. Khaled works in construction and Miriam in the family’s field, where she grows eggplants, for which Battir — which was inscribed on UNESCO’s World Heritage and World Heritage in Danger lists in 2014 — is known. “Every eggplant is 40 centimeters [16 inches]. They are huge. The entire world wants them,” says Khaled.

A month ago, when Miriam came to work in the fields, she saw something that made her immediately turn around and run back home: eight armed Israeli settlers and a Doberman walking around the field. They built a tent in a nearby plot of land belonging to Battir resident Ghassan Alyan, where they tethered their sheep. They stayed until sundown before leaving.

“This is what they have been doing for a month, a group of settlers, several times a week. Yesterday (July 26) they came again,” Alyan says. “I have a cistern from which I drink. The settler routinely undresses and climbs into the cistern in order to swim in it.

“If I gave you a glass of water, and put a finger in it before, would you drink it?” Alyan asks. “My guess is no. So now imagine what I feel. It’s repulsive. It drives me crazy. I’m helpless.”

The man Alyan refers to is Lior Tal, a settler leader who comes to this spot east of Battir from his home in the illegal outpost of Neve Ori, just 2.5 miles away, which he built less than a year ago.

Alyan says that he first saw Tal herding sheep on Battir’s land. “I didn’t have an issue with that, as long as he doesn’t destroy anything — why should I care? But now it has gone beyond that. He arrives, tethers his sheep in the sun from 8 a.m. until evening, and doesn’t herd. He just stays there. For the sake of provocation. Last week, he knocked on the doors of Battir’s residents and demanded they present him with land ownership documents.”

Khaled Muammar explains that the area is strategically important for the settlement enterprise in the West Bank. “They want to take over this area for three reasons: first of all, because of its elevation; it overlooks the region. Secondly, it separates [Battir from] al-Walajeh; settling there creates a wedge between two Palestinian villages. And thirdly, because it creates geographical continuity between [the Israeli settlement] Har Homa and Jerusalem.”

Dror Etkes, one of Israel’s foremost experts on the settlements and the head of Kerem Navot, an organization that monitors and researches Israeli land policy in the West Bank, believes the settlers’ arrival in Battir at the end of June is not a coincidence. “Why? Because of the Trump plan,” he explains. “This area, according to the plan, is supposed to be Palestinian territory. They want to take over the area now, before the government signals that it is going to accept the plan. To create facts on the ground.”

This is not the first time settlers have tried to take over this area. In December 2018, hundreds of settlers arrived overnight with bulldozers and tractors, dug an access road through the mountain, and tried to establish an outpost. They failed: it rained, the vehicles got stuck, and in the morning the Civil Administration — the arm of Israel’s military government that governs the 2.8 million Palestinians in the West Bank — evacuated them.

“The effort in 2018 was well-funded,” Etkes adds. “Everything was done very professionally, with heavy vehicles. That’s an investment of hundreds of thousands of shekels.”

When Alyan saw Tal’s tent on his land, he called the Israeli police, who in turn called the army.

“A few soldiers arrived quickly,” recounts Muammar, who was with Alyan at the time. “We pointed at Lior. We said that he was just sitting here with his Dobermans and a weapon, and that there were all kinds of people with him, all with weapons. We explained that they had entered the olive and date groves, that they were creating unnecessary friction that will lead to someone getting hurt. We told them that this is bad, that we don’t want trouble.

“The first three times, one of the soldiers told me, ‘Don’t speak with Lior. Ignore him. We’ll remove him,’” Muammar continues. “Then the soldier went to Lior and told him, ‘You are on private Palestinian land. You need to leave.’ And that’s what happened.

“But things changed. The last two times, a different soldier came. He sat with Lior on the side and spoke to him. Afterward he told me that I couldn’t be here. I said, ‘What do you mean? This is my land, here are the documents.’ But he didn’t listen to me. He said Lior can be here and if there is a problem, I need to go to the Civil Administration in Gush Etzion [the nearby settlement bloc] and prove that it is my land.”

When Tal and his gang arrived once again on July 25, the residents of Battir decided not to call the army. “We realized they wouldn’t do anything. There is no point.”

There is nothing coincidental about the settlers’ decision to build their tent on Alyan’s land. In 1982, Israel declared his property, along with a substantial portion of the land in the area, “state land,” using the Ottoman Land Code — a 19th century legal mechanism adopted by Israel that gives it the authority to turn uncultivated agricultural land into state land.

Alyan explains that he did not cultivate his land for a brief period because he had used it to grow tobacco and wanted to let it rest before growing different crops. “When I returned to work on my land, a representative from the Civil Administration came and told me that I was on state land. He asked me to vacate the premises and handed out fines to my employees. The Civil Administration didn’t even inform me that they had expropriated the land.”

Alyan continues: “It is good land. It has belonged to my family for generations, with a deed of ownership. I want to plant on it, but in order to work the land I need tractors for plowing. We brought a tractor and used it for three or four hours. Then the Civil Administration came and told us that this was forbidden because we were on state land. They confiscated the tractor. Every year we try to work the land and they come and confiscate.”

Beating the ‘Deal of the Century’ to the punch

Tal’s outpost, Neve Ori, was built without a permit just a five-minute drive from Battir. Teenagers from across Israel come to volunteer at the outpost, where they “work, sweat — and absorb many values,” as per Neve Ori’s website. Families are also invited “to have fun with their children and take part in Jewish presence on the mountain and the protection of land.” There’s even a petting zoo.

I called Tal to question him about why he is invading Battir’s land. He insisted that his actions are being carried out “legally” on land that the state “took back,” claiming that “They [Palestinians] stole the land from me.”

Asked why he came to Battir given that it is 2.5 miles away from his outpost, Tal replied, “My farm is on land that belongs to the Jewish National Fund and is surrounded by private land with olive groves. [Battir’s land] is the only land in the area that no one can claim ownership over.”

Tal is overt in his antagonism toward the Palestinians of Battir. “I want all of Battir to go to hell…the State of Israel belongs to the Jewish people,” he says. “I have no problem with [Palestinians] staying if they agree to the Seven Laws of Noah [a set of prohibitions that Orthodox Jews believe are binding for everyone] or if they want to convert.”

It is easy to frame Tal as a religious fanatic. But the essence of his words — the desire to maximize Jewish settlement at the expense of Palestinians — has always defined the left wing of the Zionist movement, too. This includes the dovish Meretz party, which has representatives in the Jewish National Fund — the same organization on whose land Tal built his outpost.

When Neve Ori was established in 2019, the Civil Administration asserted that the settlement structures “were erected illegally and without an appropriate permit and will therefore be evacuated.” Almost a year has passed since then, and the outpost still stands. On Tuesday, a spokesperson for the Civil Administration said that “on-site enforcement will be carried out in accordance with the authorities and procedures and subject to [the Administration’s] priorities.”

According to the NGO Kerem Navot, settlers have established 37 new Israeli outposts in the West Bank over the past five years. The process across these outposts is very similar: a family settles on “state land” and starts building structures without permits, and those structures remain “illegal” until the state retroactively approves them.

The most recent outpost was established only a week ago, east of the Palestinian town of Yatta near Hebron, also on land that according to Trump’s plan is supposed to be on the Palestinian side. “The timing and location are not a coincidence,” says Etkes of Kerem Navot.

‘Space is running out’

Vivien Sansour, a Palestinian ecological activist, was born in the West Bank city of Beit Jala, a scenic area full of ancient terraces, springs, vineyards, and olive groves — and also the site chosen by Israeli settlers to establish the Tal outpost.

Exploring the surroundings of Beit Jala “molded” Sansour as a child, she says. But Tal has changed things. “Ever since the outpost was established last year, I no longer feel comfortable coming near,” she says. “An armed man is there constantly. I do not feel safe as a woman, and certainly not as a Palestinian woman.”

The outpost, Sansour adds, is also harmful to the environment. “There is a huge, ugly, black plastic animal pen there that does not fit with the traditional [Palestinian] way of building on a mountain — the kind that relies on natural materials. The outpost has cut through a geographical contiguity that has existed for centuries. We used to walk here from hill to hill on foot, on paths, and then it stopped. This damages the environment, the ecology and, of course, human beings.”

Sansour manages an heirloom seed library in Battir. “Palestinian ecological culture is being destroyed. By saving these seeds, I am saving who I am, my culture, and reminding the following generations that we are valuable,” she says.

“The land taken by this settler is Battir’s last room to breathe,” Sansour continues. “People are being forced to emigrate to Bethlehem because they do not allow us to build here.”

Battir is surrounded by Area C, under full Israeli military control, and where Palestinians are rarely granted building permits. The Civil Administration rejects 98.6 percent of applications for permits in these areas, and destroys what Palestinians build on their own initiative.

“People are crammed into cities where space is running out,” says Sansour. “From day to day, Palestinian cities are turning into ghettoes, concrete refugee camps. It is impossible to grow food on concrete. From a rich agricultural society, we are growing dependent on Israeli companies to feed us.”

[Yuval Abraham is a photography and linguistics student. A version of this piece was originally published in Hebrew on Local Call. Read it here.]