Employee survey platforms allow employers to sort groups of employees by the departments, locations, and demographics most likely to unionize. 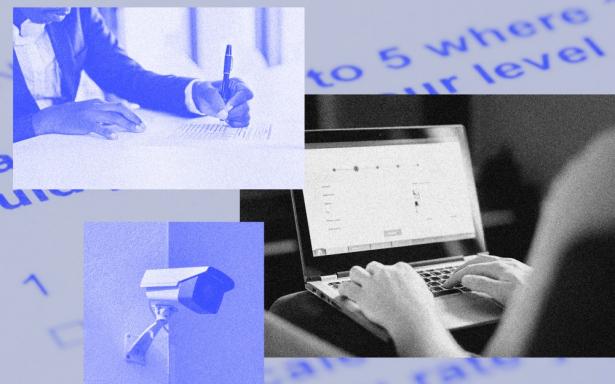 InApril, Business Insider reported that Whole Foods kept tabs on stores likely to unionize through an interactive heat map based on scores derived from more than two dozen metrics. A June Vox story about Amazon’s workforce describes a similar heat map, with executives keeping tabs on potential unionization “hot spots” via a calculation that relied on employee survey data, timing of the last pay raise, and dozens of other factors.

But Amazon isn’t the only company doing this sort of work. Thanks to a glut of tech platforms that deploy sophisticated methods for collecting and analyzing employee data, pinpointing groups of employees who are likely to unionize is a capability within reach for any employer.

Though employee surveys and the data analytics applied to them are commonly used to monitor things like employee engagement and workplace culture, at least two employee survey platforms also use data collected through surveys to pinpoint the store locations, departments, and demographics of employees that are most likely to unionize. Littler Mendelson, one of the largest employment and labor law firms, told OneZero it is actively considering building a similar tool.

Under the National Labor Relations Act, employers are not allowed to question employees about their union activities or membership in a way that may restrain or coerce them, for instance in a context that offers benefits if they don’t join a union or threatens to fire them if they do. Directly asking workers whether they are favorable to a union could open a company up to legal challenges, but a regular survey with more general uses such as assessing engagement and potential turnover is less likely to raise red flags.

“With our platform, they can literally log into the platform… and say, ‘We see that 20% of that group is at risk of unionization.’”

One platform, Perceptyx, which says it counts 30% of Fortune 100 companies among its clients, includes a “union vulnerability index” as a default option in its “hot spot” feature, which uses 12 million survey responses from previous clients, as well as research from its internal team and industry sources like journals and standards organizations, to predict certain outcomes. The view allows companies to easily rank groups of employees — those who for instance share a certain age, location, department, manager, tenure, or other criteria, or a combination of criteria — by the percentage who are likely favorable, neutral, or unfavorable to a union.

“We’ve all been in that meeting where a leader says, how does X relate to Y,” Brett Wells, Perceptyx’s director of people analytics, tells OneZero. “[For instance,] tell me how many employees who are high-performing and have been at the company for two years or more are at risk of unionization. With our platform, they can literally log into the platform and have the answer to that question, and say, ‘We see that 20% of that group is at risk of unionization.’”

Another platform, WorkTango, allows clients to build surveys that include questions assessing how favorable employees may be to unionization. WorkTango co-founder Rob Catalano says that the platform would allow employers to see, based on correlations established by outside research (for instance, linking right-to-work laws to the prevalence of union organizing campaigns), a company’s external data (aside from survey responses), and other factors. Employers can look at whether there are parts of the organization that have a higher propensity to unionize, whether that be specific locations, departments, or any other attribute for which the company has data.

Surveys may be sent to employees by email, a link sent to their phones via SMS, or in some manufacturing contexts, through a portal on the shop floor. Not all the questions used to assess union vulnerability are explicitly related to unionization. To assess union vulnerability, Perceptyx, for instance, includes employees’ answers to questions such as “I am comfortable discussing concerns with my manager”; “My manager treats employees with respect”; “I am appropriately involved in decisions that affect my work”; “I am able to balance my work and personal life”; “When I do an excellent job, my accomplishments are recognized”; “I am satisfied with the benefits provided by our company”; and “I am paid fairly for my contribution to the company.”

Employers who view the report can dig into which questions Perceptyx has found to be driving the potential desire to unionize, and respond accordingly. For instance, they might see that among those deemed likely to be favorable to a union, a high percentage said they weren’t satisfied with their benefits. That data could help the company decide to upgrade its benefits.

Perceptyx also uses non-survey data in order to draw conclusions about likelihood to unionize. As with the company’s other data tools, like those that interpret surveys to assess employee engagement, aid diversity and inclusion efforts, or investigate the cause of high turnover, groups of workers can be established using criteria such as sales data, financial metrics, ethnicity, or productivity data. “A typical implementation, we’re ingesting hundreds of data points for every employee who completes a survey,” says Wells.

The company can similarly factor in non-survey data when making predictions. “Employees in states that do not have right-to-work laws are far more open to unionization,” he says. “Other indicators or demographics that play into it are things like company size. We don’t see the small companies unionizing, but extremely large companies.”

Perceptyx and WorkTango aren’t specifically designed to root out union organizing. “I think it’s the cherry on top for some clients, but by no means is it the meat and potatoes of their decision-making process,” Wells says. WorkTango’s Catalano says it’s not in the top five or 10 reasons that companies choose to use the platform, though some clients have chosen to use it this way.

Union membership in the United States has declined dramatically over the last several decades, with just 6.2% of private sector workers belonging to a union in 2019, compared to 16.8% in 1983. Beginning in the 1950s, an industry of consultants and law firms started advising companies on how to avoid unionization campaigns. Based on an analysis of publicly available reports filed with the U.S. Department of Labor’s Office of Labor-Management Standards, the Economic Policy Institute estimates that employers now spend nearly $340 million per year on union avoidance firms. These firms often provide so-called union vulnerability assessments, which are usually based on employee surveys or interviews. A pamphlet from the Hutchison Group, a management and labor relations consulting firm, describes its assessment like this: “We can help to discreetly determine your vulnerability to potential union organizing. Having worked with both union and nonunion companies over the past 30 years, we have learned to identify key warning signs and recommend proactive steps to reduce your risk of a union organizing campaign.”

As the sources of workplace data increase and analysis techniques become more sophisticated, the focus of these firms has shifted, says John Logan, a professor of labor and employment studies at San Francisco State University who studies the union avoidance industry. “The emphasis on the areas of expertise, the tools, the knowledge to best help you conduct those types of vulnerability assessments, they’ve changed over the years,” he says. While in the ’70s and ’80s, union avoidance consultants typically advertised their understanding of behavioral science and industrial psychology as the key to assessing unionization risk, “more recently the emphasis has been on tech and big data and algorithms and other tech innovation.”

Employment and labor law firm JacksonLewis advertises that its “data analytics group leverages employers’ rich workforce datasets to enable effective data-driven decisions for workforce-related issues.” The company did not respond to an inquiry from OneZero. Ogletree Deakins, another large employment and labor law firm, hired its first director of data analytics in 2018 and did not respond to a question about whether it uses data analytics in vulnerability assessments. There are various ways these types of firms use data analysis: They may determine whether there is a potentially illegal bias in who a firm lays off or how it pays its workforce. They may look at data relevant to a specific lawsuit, such as tracking a worker’s movement throughout the day to prove when they were working or not.

He says if a company can identify data that correlates to the tendency to organize, it can work to preemptively address specific concerns likely to drive unionization. “You can nip it at the ‘hey we’re unhappy’ stage versus ‘hey we’re unhappy and we think a union is the answer,’” he says.

Crews describes these dashboards as early experiments for some employers and firms like his, and said he’s skeptical of how well such assessments accurately assess the likelihood of unionization efforts. “I’m sure it’s possible,” he says. “I’m not sure there’s good data of sufficient quantity to drive it yet.”

The legality of deploying a survey that can theoretically be used to identify whether employees are likely to unionize has been challenged in the past. Wilma Liebman, a former chairman of the National Labor Relations Board under Obama, cites a 1990 decision adopted by the NLRB in a case where a company’s psychological tests of prospective employees was challenged. It was alleged that the test, which measured whether individuals would be “loyal,” likely to “promote friction,” or loyal to “company interests,” could also ascertain an applicant’s union sympathies. In the decision, an administrative law judge wrote that he “could find no evidence that the tests revealed a person’s union sympathies.”

Liebman says that even if companies could use these tests to try to weed out “troublemakers” or union supporters, “I did not come across any case that held merely using these kinds of tests alone was unlawful.” She says that if companies were to make it clear that they would remedy grievances expressed in a survey, but only if workers did not join a union, or if managers were to imply the purpose of the survey was to assess workers’ views on unions, that would more likely be deemed illegal activity.

“It’s about what they do with it,” she says.