Gangs of sheriff’s deputies, violent cliques who glorify “aggressive” policing, have operated out of Los Angeles County stations and jails for decades. Their criminal behavior has been so egregious it has resulted in $55 million in legal payouts. 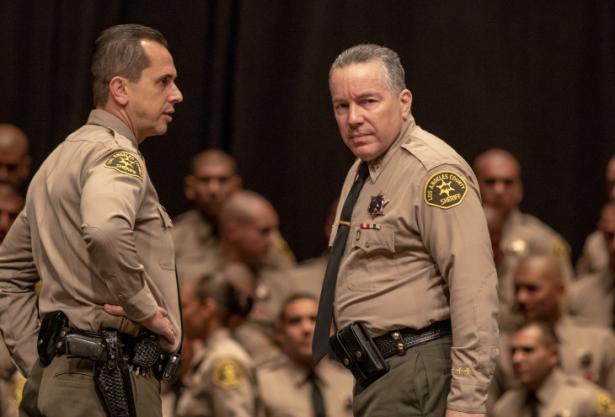 Los Angeles County has paid out roughly $55 million in settlements in cases in which sheriff’s deputies have been alleged to belong to a secret society, records obtained by the Los Angeles Times show, illuminating the entrenched nature of a subculture that has plagued the Sheriff’s Department for years.

The figure comes from a list that includes payouts in dozens of lawsuits and claims involving deputies associated with tattooed groups accused of glorifying an aggressive style of policing. The report, prepared by L.A. County attorneys, lists nearly 60 cases, some of them still pending, and names eight specific cliques.

The county has paid out nearly $21 million in cases beginning in the last 10 years alone, according to the document.

The high cost underscores how these deputy groups — with monikers such as the Vikings, Regulators, 3000 Boys and the Banditos — have operated out of several Sheriff’s Department stations and jails for decades, exhibiting what critics have long alleged are the violent, intimidating tactics similar in some ways to criminal street gangs. The cases involve incidents that date to 1990.

Over the years, a succession of elected sheriffs has failed to bring the subgroups under control despite multiple internal investigations and, more recently, a probe by the FBI. Many civil liberties advocates and county watchdogs have accused the Sheriff’s Department of turning a blind eye.

“I think it’s a willful failure,” said John Sweeney, an attorney who has represented families of people killed by deputies. “For some reason, they pride themselves, the Sheriff’s Department, on having these violent cliques I guess to show the public who’s the boss. But, you know, what it does is just fosters a horrible relationship between the community that these sheriffs serve.”

The Board of Supervisors requested the list of payouts last year after The Times reported that members of the Banditos, who operate out of the East L.A. station, were accused of assaulting other deputies during an off-duty party in 2018. One deputy was knocked unconscious.

Sheriff Alex Villanueva has said that he put measures in place in February that prohibit deputies from participating in cliques.

“The fact that I’ve had to address these issues which have been festering since 1990 is an illustration of the failure of past sheriffs from addressing the issue head on,” he said in a statement, adding that he transferred leadership personnel from at least one station to combat the clique problem and was holding employees accountable if they failed to uphold the new policy.

Inspector General Max Huntsman said last week that he was “aware of no implementation whatsoever” of Villanueva’s new measures and that his office couldn’t effectively investigate the secret societies “because of the obstruction of the Sheriff’s Department.” Huntsman said the criminal investigation in the off-duty Banditos beating amounted to a “cover-up,” noting that more than 20 deputies present during the incident were not required to give statements.

Lt. John Satterfield said investigators conducted more than 70 interviews as part of an administrative investigation of the Banditos claims and were sharing information from reviews under the new clique policy with the FBI.

“The IG continues to further this distorted narrative that his office is not provided documents or information in order to ‘investigate’ or provide oversight,” he said, adding that in the last 13 months the oversight office has had access to more than 500 documents. “Despite his misleading statements, the sheriff continues to provide him with access and continues to welcome oversight.”

Defenders of the deputy cliques say they represent hard work and boost morale by fostering camaraderie.

Sean Kennedy, a member of the Civilian Oversight Commission and professor at Loyola Law School, said last week that he and his students had identified at least 17 gangs — some of them historical — in the department.

The largest payout on the list — $10.1 million — went to Francisco Carrillo Jr., who spent 20 years behind bars before having a murder conviction overturned in 2011. Carrillo, who was 16 at the time of the 1991 fatal drive-by shooting, maintained his innocence through two trials and in prison.

He sued later, claiming that deputies had improperly influenced witnesses to pick his picture from a photo lineup and that deputies involved in the case were members of the Lynwood Vikings, a white supremacist gang within the Sheriff’s Department.

“This has been a cancer of the Los Angeles Sheriff’s Department for decades,” said Ron Kaye, an attorney who represented Carrillo. “The only reason that this type of illegal activity and lawlessness under the color of law can survive is if the department and its administration looks the other way.”

Another lawsuit involving a bicyclist shot and killed by deputies in South L.A. was settled for $1.5 million in 2018 in part because one deputy had probably committed perjury when he denied that he was a member of the Regulators operating out of the Century station, officials said.

Several of the payouts involve the 3000 Boys and the 2000 Boys at Men’s Central Jail. A top jail official had described exclusive gangs of deputies who would “earn their ink” by breaking inmates’ bones.

Richard Drooyan, the court-appointed monitor of jail reforms in the Sheriff’s Department, said the agency had taken steps to address the problem in the jails, where deputies are rotated into different assignments more frequently to prevent the formation of cliques.

More recently, a sheriff’s deputy filed a claim alleging that the Executioners clique,which is not named in the county report, essentially runs the Compton sheriff’s station.

Austreberto Gonzalez’s claim, the precursor to a lawsuit, alleges that the group numbers about 20 deputies, while 20 more are prospects or associates. Many work at night, the claim says, and communicate through WhatsApp. Black and female deputies are not allowed in the clique, the claim says.

The claim says the group sports tattoos of a skull with Nazi imagery and an AK-47, and celebrates deputy shootings and the induction of new members with “inking parties.”

In recent years, the claim says, its members were involved in illegal arrest quotas and threatened work slowdowns — which involve ignoring or responding slowly to calls — when they did not get preferred assignments.

Gonzalez alleges in his claim that members of the gang retaliated against him after he reported that a deputy who belonged to the Executioners assaulted a colleague, Thomas Banuelos.

Banuelos filed a claim Tuesday alleging that the deputy who attacked him warned him not to cooperate with investigators and to lie about the assault or he would be labeled “no good” by the clique, said his attorney Alan Romero.

Also on Tuesday, Compton Mayor Aja Brown called on state Atty. Gen. Xavier Becerra and the U.S. Justice Department to investigate whether Compton deputies had engaged in misconduct, excessive force, discriminatory policing and improper stops, searches or arrests. The city has a $22-million contract with the Sheriff’s Department for patrols and other law enforcement services.

“We demand the same treatment that deputies provide to the residents of Malibu, Rancho Palos Verdes and other affluent communities. And, according to the size of our contract with the Sheriff’s Department, we have $22 million reasons to expect it,” Brown said in a statement.

[Alene Tchekmedyian is a staff writer for the Los Angeles times where she covers the Los Angeles County Sheriff’s Department. She previously wrote about the county’s criminal courts and breaking news throughout California.]

Moderators Note: In response to the massive demonstrations sparked by the killing of George Floyd, the California State Legislature, in a session that ends August 31, is considering a myriad of bills that could transform policing in California. Among the most important of these are:

1.  AB1185, which would give county board of supervisors increased oversight over elected Sheriffs and their departments, including the authority to establish an oversight board or an office of inspector general, with investigative powers, including the right to issue subpoenas

2.    SB731, which could give the state authority to revoke the professional certificate of an officer who has used excessive forces, committed sexual assault, made a false arrest or committed ethical violations such as falsifying evidence.

3.    SB776, which would make public all investigations of police officers involving charges of inappropriate use of force, sexual assault, false testimony, and discrimination, wrongful arrests and searches.

4.    AB1022, which would require police officers to intervene when a colleague uses excessive force.