New York Democratic legislators are trying to tax stock trades and capital gains. Wall Street is horrified by such a development — but luckily, their millions in campaign contributions have helped create a solid friend in Andrew Cuomo. 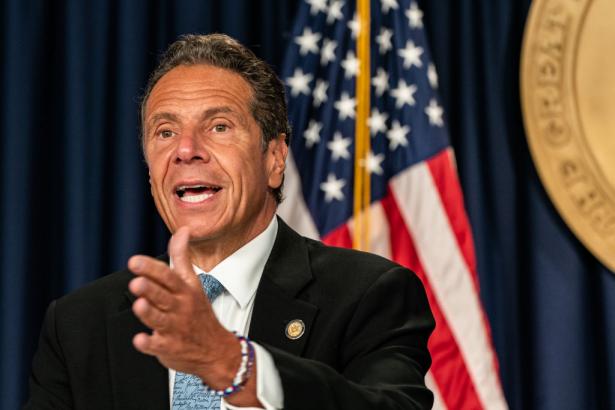 In blocking his party’s push for new taxes on stock trades, capital gains, and carried interest, New York governor Andrew Cuomo is protecting the financial industry that has delivered millions to his campaign and political operation, according to state records reviewed by me. That includes the single-largest donor to the state Democratic Party during Cuomo’s 2018 reelection bid, who just delivered large donations to Cuomo as the governor has stymied the tax proposals.

Last month, billionaire James Simons and his wife gave Cuomo $90,000. Simons is the founder of the hedge fund Renaissance Technologies, which could be subject to the new levies being pushed by New York Democratic legislators. In total, Cuomo has received over $280,000 from Simons and his family. The Cuomo-controlled New York Democratic Party has received an additional $3.4 million from Simons.

Cuomo’s political machine has received big donations from other hedge fund moguls including Dan Loeb ($197,000) and Stanley Druckenmiller ($60,800), who could also be impacted by the Democratic tax initiatives aimed at the financial industry.

Democratic legislators have been pushing the tax measures to raise new revenues that they say could be used to prevent budget cuts to education, health care, and other state programs.

Disclosure records reviewed by me show that the financial industry has been actively lobbying on the tax proposals in Albany — and Cuomo has parroted their opposition to higher taxes on the rich.

“I literally talk to people all day long who are in their Hamptons house who also lived here or in their Hudson Valley house or in their Connecticut weekend house,” the governor said on August 3, suggesting that billionaires and multimillionaires will leave New York if higher taxes on the wealthy go through.

Michael Kink, the executive director of the labor-backed Strong Economy for All Coalition in New York, told me that Cuomo’s work to block progressive taxation is indicative of his warped priorities overall.

“A governor that’s connected to reality would be examining every single possible way of raising revenue in the time of crisis,” Kink said. “When you’re so close to someone like James Simons, that leads to you blocking the door to some of the biggest and most important sources of revenue. There’s a door called the billionaire’s tax — $5.5 billion a year. Cuomo strolls away from that door. Then there’s the stock transfer tax door which is $13 billion a year. The vast majority of people who would pay are the speculators who are diving in and out. James Simon, Dan Loeb, a lot of Cuomo’s major donors are the ones that would pay that tax.”

Cuomo has received more than $10 million from the securities industry, according to data compiled by the National Institute on Money In Politics. In the current legislative session, the governor has refused to support three sets of Democratic tax plans aimed at Wall Street.

One bill would levy a 19 percent tax on investment income to eliminate the federal benefits of the carried interest tax deduction, which allows private equity and hedge fund managers to classify their income as capital gains, which is taxed at 15 percent instead of the top tax bracket of 37 percent. It is dependent on the legislation being passed in Massachusetts and Connecticut to go into effect. The compact carried interest legislation already passed in New Jersey in 2018.

Another bill would impose a state-based surcharge that would equalize taxation between capital gains and labor — in effect a more expansive piece of legislation than the carried interest bill.

Finally, Democratic legislators have pushed legislation to revive New York’s stock transfer tax. The stock transfer tax was in existence in New York from 1905 to 1981, and is technically still on the books, even though Cuomo previously tried to repeal it. The original tax’s revenue was split between the city and state of New York. The state began rebating the tax to the payers in 1981 during the Hugh Carey administration which also oversaw the restructuring of New York City by crushing austerity on the city’s working class. Cuomo has pushed for the full repeal of the tax.

Renaissance Technologies, led by Cuomo’s biggest donor Simons, is reportedly involved in “high-frequency trading” — a business that gained mass public recognition after the publication in 2014 of Michael Lewis’s Flash Boys. While secretive, the firm has been identified as a company that “has made high-frequency finance a huge success” by Richard Olsen, a Switzerland-based financial technologist. Efforts to reinstate New York’s tax on stock trades or financial transactions could threaten Renaissance’s profit margin.

Simons’s firm has also been fighting the IRS over a potential $6 billion tax bill.

In blocking the tax measures, Cuomo is aiding some of Wall Street’s most powerful companies and front groups that have been lobbying on those bills in Albany.

For instance, the American Investment Council (AIC) and the Securities Industry and Financial Markets Association (SIFMA) have been lobbying on the Democratic proposals, according to state lobbying records. The former represents major private equity firms and the latter represents broker-dealers, investment banks, and asset managers.

AIC brought on lobbying firm Greenberg Traurig, which has funneled over $130,000 to Cuomo over the years. SIFMA has employed two firms — Reid, McNally & Savage and Brown & Weintraub, the latter of which was founded by two aides to former Gov. Mario Cuomo.

In a memo obtained by me, SIFMA told legislators in July that the financial transaction tax proposal would result in Wall Street firms “relocating personnel outside New York.”

The same week SIFMA’s letter was blasted out to legislators, Andrew Cuomo’s office parroted the same line, telling Bloomberg News: “In the digital age, it would be even easier for transactions to simply be moved out of state to avoid the tax.”

The governor has said he supports closing the carried interest tax loophole, but it has never appeared in the final budget, despite the governor’s expansive powers over budgeting in New York.

Bill Mulrow, a top Blackstone executive, led Cuomo’s administration between 2015 and 2017, when he rejoined the firm. In March, Cuomo appointed Mulrow to help lead the state’s COVID-19 response.

Fox Business reported in April that Mulrow is spending little time at Blackstone, and that his boss, Schwarzman, “is said to be paying close attention to Mulrow’s efforts because of the implications it has for Wall Street.” Blackstone has spent $255,000 lobbying the legislature this cycle.

If the tax measures do not pass, the state will be forced to balance its budget with $8.2 billion worth of cuts to schools, hospitals, and local governments.

“We are demanding that the superrich pay up,” said Jonathan Westin, executive director of New York Communities for Change. “Many of them have increased their wealth by billions and we should be demanding that they pay so that the rest of us can live.”

Polls show that New Yorkers prefer higher taxes on the rich over devastating cuts to services.