Trump is Trying to Destroy the US Postal Service. We Should Expand It

A completely politicized and manufactured crisis threatens to destroy the US Postal Service, our most important, successful and trusted institution by any measure. While the Trump Administration seeks to destroy it we must embrace and empower it. 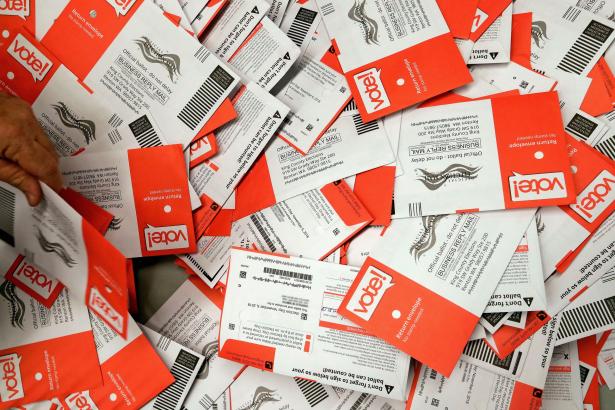 Vote-by-mail ballots. President Trump admitted August 13th he was blocking emergency funds for the US Postal Service because “they need that money in order to have the post office work so it can take all of these millions and millions of ballots.” , Elaine Thompson/AP/Shutterstock

There is an American corporation that employs 633,108 people, handles 142.6bn pieces of product every year, and holds a 48% global market share in its sector. It constitutes a domestic retail network larger than McDonald’s, Starbucks and Walmart combined, one that spans even the most rural and isolated parts of the United States. It is an iconic brand tremendously popular with the American public. Even during a devastating pandemic, this firm has seen its total third-quarter revenue increase by $547m year over year.

Instead of trumpeting that 3.2% gain, however, the corporation’s CEO ominously warns that the company is “in a financially unsustainable position absent significant fundamental change” and threatens to start scrapping it for parts.

The notion is bizarre. Yet that is exactly what’s happening to the United States Postal Service (USPS). A completely politicized and manufactured crisis threatens to destroy one of the most important institutions in the United States.

The US Post Office Department was created by the federal government soon after the American Revolution with a mission to connect a geographically diverse country and avoid the state censorship that plagued colonial America. In the centuries that followed, it has only expanded that mandate, maintaining tens of thousands of far-flung retail offices and postal boxes, all at no taxpayer expense.

No surprise that 91% of Americans hold a favorable view of the USPS.

Contrary to common tropes of state inefficiency, the post office is both fulfilling a broad social service, far beyond what is expected of any private corporations, and doing so profitably. Those profits are disguised, however, by a 2006 law imposed by Congress that requires the USPS to create a $72bn fund to pay for its post-retirement healthcare costs 75 years into the future. It’s a requirement no other organization, public or private, has to fulfill.

Business leaders often worry about state intervention “picking the winners and losers” of market competition. But the decades-long campaign against the USPS is more like the opposite – the state undermining its own successful project in pursuit of ideologically driven cutbacks and privatization schemes.

The damage being done won’t just affect American consumers, particularly those in rural areas that rely the most on the USPS. It will also affect voters – during a pandemic when voting by mail is more important than ever – and hundreds of thousands of workers.

Postal employment is one of America’s most powerful engines of upward mobility. As early as 1861, the Post Office Department began hiring black employees and maintained that practice throughout the century of racial apartheid that followed the end of slavery. Today, a full quarter of USPS workers are black and the vast majority of them unionized. For these workers, and millions of others, stable public sector employment is the only viable route to union protections, job stability and a decent living.

Given the status of the USPS as one of the largest employers in the United States, a needless austerity program of any size would directly affect every community in the country. But the indirect effects would be just as profound. Collective bargaining influences pay and benefits across sectors, benefiting even non-union workers in private companies like FedEx. USPS unions, such as the American Postal Workers Union, have intervened more widely, too, in defense of social goods enjoyed by all working people and backing Bernie Sanders and his demands for new programs like Medicare for All.

However, rather than just trying to protect the USPS as it currently exists from Trump administration attacks, we should go further. Let’s expand the USPS’s mandate.

We can imagine, for example, the USPS using its unrivaled logistical reach to deliver food and other essentials to the poor and elderly

For example, we should consider resurrecting postal banking. Throughout much of the 20th century the Post Office Department operated a savings system, which allowed customers to make deposits. Today, numerous countries offer postal banking services, including France, New Zealand and South Korea. The return of the postal savings system could help the millions of American adults who currently don’t have a bank account, but may regularly access the more than 17,000 post offices in zip codes where there is only one or no bank branch location.

As private banks continue to operate in predatory ways and close local branches and “payday lenders” prey on workers without bank accounts, a viable public option is needed more than ever.

We can imagine, for example, the USPS using its unrivaled logistical reach to deliver food and other essentials to the poor and elderly, or expanding into the field of telecommunications by helping to improve access to broadband internet in rural areas. No single part of our government is going to be able to do everything well. But it’s worth considering expanding the scope of our best-functioning agencies to meet the challenges of the 21st century.

Despite our country’s tremendous wealth we’re failing behind our peers in the industrial world on a range of metrics such as poverty, hunger, life expectancy and infant mortality. Part of the reason is our refusal to invest in and develop our public sector and services. We’re failing ourselves and generations to come. Now is the time to double down on our most beloved and efficient public institution, not jeopardize its future.

[Bhaskar Sunkara is the founding editor of Jacobin magazine and a Guardian US columnist. He is the author of The Socialist Manifesto: The Case for Radical Politics in an Era of Extreme Inequality.]