Trump Might Cheat. Trump Will Cheat. Activists Are Getting Ready.

Election sabotage needs to be met with the largest protests yet. “A show of numbers in the streets — and actions in the streets — may be decisive factors in determining what the public perceives as a just and legitimate outcome.” 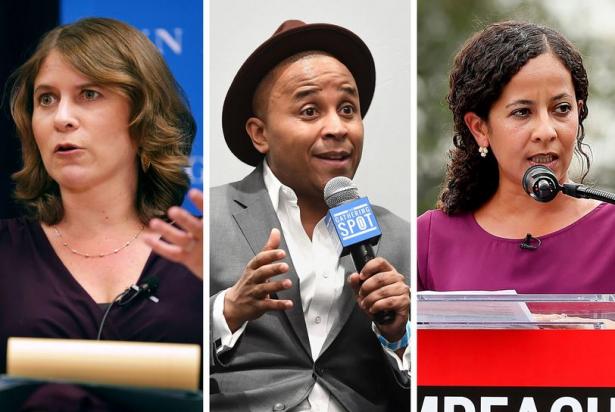 Rosa Brooks, left, a law professor at Georgetown, and the activists Rashad Robinson and Rahna Epting are among those contemplating what might happen if the November election is marred by dubious maneuverings., Credit: From left, Chip Somodevilla/Getty Images; Paras Griffin/Getty Images for Netflix; Paul Morigi/Getty Images for Moveon Political Action

This summer, a bipartisan group of former government officials, political professionals, lawyers and journalists held a series of war game exercises about how the 2020 election might go wrong. Convened by the law professor Rosa Brooks and the historian Nils Gilman, it was called the Transition Integrity Project, and the results were alarming.

“We assess with a high degree of likelihood that November’s elections will be marked by a chaotic legal and political landscape,” said a resulting report. President Trump, it said, “is likely to contest the result by both legal and extralegal means.”

Participants in the Transition Integrity Project played out tactics the president might try if threatened with defeat, including federalizing the National Guard to stop the counting of mail-in ballots. In each scenario, the decisions of the Department of Justice, state officials and the candidates themselves proved pivotal.

But so was the willingness of masses of people to protest. “A show of numbers in the streets — and actions in the streets — may be decisive factors in determining what the public perceives as a just and legitimate outcome,” said the report.

Progressive organizers are preparing for this eventuality. They’ve seen Trump tweet about postponing the election, spread lies about voter fraud and try to sabotage the Postal Service. Many of them remember the 2000 presidential election, when rowdy Republican operatives physically stopped the vote count in Florida while hapless Democrats put their faith in the courts. (One of the instigators of the so-called Brooks Brothers Riot was none other than the criminal Trump adviser Roger Stone.)

So a coalition of progressive groups, as well as some anti-authoritarian conservative ones, is organizing under the rubric Protect the Results to get people into the streets if Trump tries to cheat in November. “It’s a pretty massive effort that’s underway,” said Rashad Robinson, executive director of Color of Change, which is part of the coalition. Activists all over the country, he said, are “really gearing up for this fight.”

It could be a fight unlike any most living Americans have experienced. “We have been building grass-roots power for the last three and a half years,” said Ezra Levin, one of the co-founders of Indivisible, which helped put the Protect the Results coalition together. But, he said, “this is something different. This is not just a one day showing up at congressional district offices or town halls or a march. This is a possibility of a dayslong or weekslong mobilization, so we knew we had to start preparing now.”

Recently the conservative Michael Brendan Dougherty wrote, in National Review, that he has “the unsettling sense that some progressives are steeling themselves for a color revolution in the United States,” referring to the uprisings that ousted autocrats in post-Soviet countries like Ukraine. He’s right, but not in the way he thinks. Dougherty believes progressives relish the prospect of violent revolution, writing that they think “Trump must be ‘toppled,’ somehow, preferably in a major confrontation.”

But for most of us who foresee the possibility of a major confrontation, it is in no way preferable to a normal election. The prospect is, rather, a source of terror and dread that must nonetheless be considered.

“The depressing overall thrust of our exercises ended up being that if the Trump campaign is in fact truly determined to stay in power no matter what, and is willing to be absolutely ruthless about it, it’s hard to know what stops that,” Brooks said of the Transition Integrity Project.

Biden, she said, “can call a press conference, but Donald Trump can call up the 82nd Airborne.” Should Trump succeed in exploiting state power, “the only thing left is what pro-democracy movements and human rights movements around the world have always done, which is sustained, mass peaceful demonstrations.”

We don’t yet know whether Americans will turn out in necessary numbers for such demonstrations. The recent racial justice protests are some of the largest America has ever seen; protests over Trump’s systematic subversion of democratic norms have been smaller.

The group of people “that are ready to take to the streets for process fights, and whether or not our Constitution is respected, is different than people that are going to the streets because people are dying,” said Rahna Epting, executive director of MoveOn, also part of the Protect the Results coalition. “But I have faith that generally folks out there are connecting the dots between all of these causes right now.”

If Trump tries to corrupt the election, we’re going to need the people who want to abolish the police and those who want to defend the integrity of the F.B.I. to work together. They may have to put their bodies on the line in a way that few living Americans have experienced.

“We’re not prepared today to deal with this,” said Epting. The hope is that come November, we will be.

[Michelle Goldberg has been a New York Times Opinion columnist since 2017. She is the author of several books about politics, religion and women’s rights, and was part of a team that won a Pulitzer Prize for public service in 2018 for reporting on workplace sexual harassment issues. @michelleinbklyn]