Most Politicians Don’t Care About Workers. But Unions Can Make Them.

New research finds that strong unions are pretty effective at making politicians pay attention to the interests of ordinary people. In order to pursue a real pro-worker agenda in government, we need an emboldened labor movement. 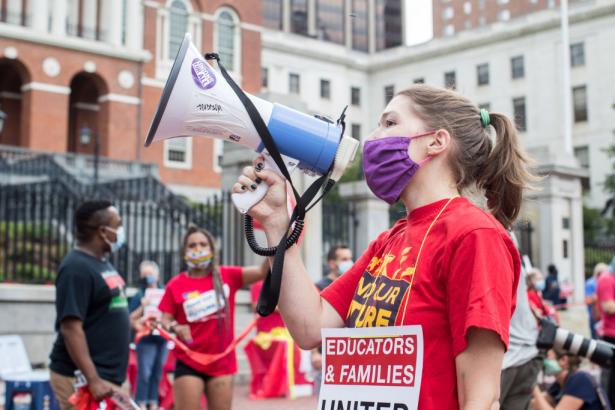 People organized by the American Federation of Teachers chant, hold signs, and raise their fists outside of the Massachusetts State House on August 19, 2020 in Boston, Massachusetts., Scott Eisen / Getty

Last week, the rideshare company Lyft announced it would be suspending all operations in California in retaliation against a court order mandating that it classify drivers as employees. Uber hinted it would do the same. Although the company’s threats are now on hold as the courts review the case, we should be clear about what those moves were telegraphing: a capital strike. It’s unknown whether it’ll work to compel the state of California to reverse course in this instance, but generally speaking, the capital strike is the most powerful weapon at capitalists’ disposal. By withdrawing investment, corporations can hurt the economy and punish governments for contravening their interests, causing trouble until they get their way.

Workers can strike, too, of course, and when they do, they can also force the hand of their bosses and of the state. But it’s a lot harder for workers to pull it off, especially on a scale large enough to make an impact. Capital strikes can be decided upon and arranged by a few shrewd and profit-minded executives in a boardroom, whereas labor strikes have to be painstakingly organized in the face of a whole host of obstacles, some thrown up deliberately by employers, and others simply facts of life under capitalism.

The difference in the ease of orchestrating a high-impact capital strike versus a high-impact labor strike shows the unequal capacities of workers and bosses to act on the state. The ability of the wealthy to donate vastly greater sums of money to candidates is another, perhaps more obvious, illustration of the same principle. But while capitalism generally prevents workers and bosses from standing on truly equal footing before the state, some intermediary measures can be taken to even things out and give workers the leverage they’re sorely missing.

Chief among these measures is unionization itself. A new article by political scientists Michael Becher and Daniel Stegmueller, “Reducing Unequal Representation: The Impact of Labor Unions on Legislative Responsiveness in the U.S. Congress,” published in the journal Perspectives on Politics, takes up the question of whether and by how much unions actually help low-income people (by focusing on income, they take a gradational, not relational, approach) exert influence on the state. In short, they find that unions really do snap low-income people’s needs into focus for politicians.

Beginning with a review of other research establishing politicians’ bias toward the wealthy, the study’s authors hypothesized that high union membership would mitigate this bias. To test their hypothesis, Becher and Stegmueller compared three things: congressional roll-call votes, income-specific policy preferences by district, and union membership by district.

Becher and Stegmueller then used this data to analyze the relationship between strong unions and politicians’ responsiveness to low-income constituents’ preferences. In the process, they sought to account for the obvious problem that if they found a strong correlation, it wouldn’t necessarily imply causation — that is, maybe unions are strong in one place because the state has historically been responsive to low-income constituents and has therefore implemented pro-union policies, and not the other way around.

After controlling for this problem with several measures — for example, factoring in which states had right-to-work laws and for how long — Becher and Stegmueller’s findings still suggest that strong unions can make politicians, who are otherwise, as a group, inclined to prioritize the interests of the wealthy, pay extra attention to the interests and preferences of people without much money. In sum, they write, “Our results imply that unions enhance political equality in Congress.”

Becher and Stegmueller speculate that there are two mechanisms by which unions exert this influence. First, through contributions and endorsements, unions are often successful in helping get Democrats elected, and Democrats are generally more attentive to the interests of low-income people than Republicans. Second, serving politicians frequently want to be reelected, a task for which union member votes and donations are regarded as useful. This acts as a somewhat disciplining force, albeit one that must naturally compete with the countervailing discipline of capital.

In a society where high economic inequality translates to political inequality, unions are already rare and important vehicles for empowering the working-class majority. But there is another, even more robust mechanism by which unions can exert influence over the state. That it doesn’t appear in Becher and Stegmueller’s article is no knock on the authors, because it doesn’t happen all that often in the contemporary United States. That mechanism is the strike.

Unions can and do influence legislative behavior on behalf of workers through the softer, nonconfrontational means Becher and Stegmueller identify. But if they really want to be in the same league as wealthy employers, they’ll need to start organizing in preparation for strikes and, when possible, pairing decisive strike action (or a credible threat of it) with demands on the state. This is something public-sector unions are uniquely poised to do, but private-sector unions can do it, too.

The Chicago Teachers Union (CTU), for example, showed how it was done when they demanded affordable housing for all Chicagoans during their 2019 strike. Chicago teachers didn’t win that lofty demand, which fell outside the purview of bargaining, but they sent a clear signal to the municipal administration: ignoring low-income constituents’ interests and needs will cause more trouble than it’s worth. For another example, also from 2019, consider when the Association of Flight Attendants (AFA-CWA) threatened to go on strike if the government didn’t end the shutdown. In that case, the shutdown ended within hours.

If the spate of threatened Lyft and Uber capital strikes in California this year is an instance of the capitalist class striking to send a political message — with the expectation that it will force the state to prioritize its interests, and get its way either now or in the future — then the actions of CTU and AFA-CWA last year offered a glimpse of what the working-class equivalent might look like.

Politicians aren’t inclined to listen to people without money — but strong, fighting unions can make them.