The Radicalism of Woody Guthrie

Legendary folk singer Woody Guthrie is best known for his anthem “This Land Is Your Land,” which can come off as an innocuous ode to America if you aren’t listening closely. But the singer-songwriter was a lifelong socialist. 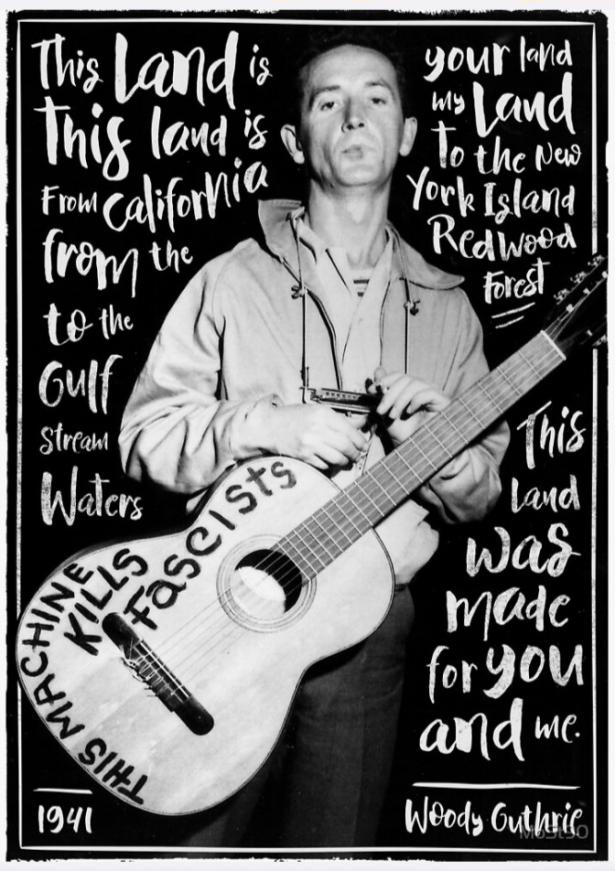 He stirred up in that bloodpot of human hearts

When he drawed that color line

Woody Guthrie wrote those lyrics in the early 1950s, when he spent two years living in the Beach Haven apartment complex in Brooklyn. The song, “Old Man Trump,” refers to Fred Trump, Donald Trump’s father, who owned the complex and allegedly barred Africans Americans from renting units. Guthrie, who had recently faced down a racist mob alongside Paul Robeson, minced no words when speaking about his landlord.

Guthrie’s lyrics might come as a surprise to those who know him solely for the schoolhouse version of “This Land is Your Land,” which seems like a paean to the National Parks Service. But Guthrie was a lifelong radical, who not only intended those lyrics much more literally than they’re typically sung, but who wrote three additional, often excluded verses challenging private property, poverty, and the capitalist state:

As I went walking I saw a sign there,

But on the other side it didn’t say nothing.

That side was made for you and me.

In the shadow of the steeple I saw my people,

By the relief office I seen my people;

Is this land made for you and me?

Nobody living can ever stop me,

As I go walking that freedom highway;

Nobody living can ever make me turn back

This land was made for you and me.

Jacobin contributor Arvind Dilawar spoke with Will Kaufman, author of three books on Woody Guthrie, about the folk singer’s music and politics — as well as how the two came to be divided. Their conversation has been lightly edited for clarity.

Was American folk music always political? Or did Woody Guthrie bring politics to the genre?

Woody would be the last to say that he was the first to bring politics to folk music. Folk music has always been political. Woody knew about Joe Hill, who wrote songs for the Industrial Workers of the World — the Wobblies — in the early twentieth century. He’d have known that the abolitionist movement in the nineteenth century was driven by music.

What were Guthrie’s politics? How did his perspective change over time?

He was born into a conservative, generally racist Oklahoma household in 1912. His father was a supporter of the Ku Klu Klan, although there’s no documentary evidence that he was actually a Klan member. On a great recent recording — The Live Wire, the only recording of a full-length, live Guthrie performance that’s been released — you can hear him talk about how he used to think like his father and make political speeches for him as a child, but that as an adult, he grew to think along the exact opposite lines as his father.

This had to do with Woody’s education on the road: going through the Dust Bowl, seeing how badly the Dust Bowl migrants were treated in California, falling in with the Communist Party (CP) and the Popular Front (there’s no documentary evidence that Woody was a CP member, but he wrote for the People’s World and the Daily Worker, and was largely in sympathy with the communist movement, if not the party itself), serving in the United States Merchant Marine during the war, witnessing Jim Crow and the Cold War, and seeing his friends like Pete Seeger getting hauled before the McCarthy committee.

He saw a lot in a tragically short lifetime — he was only fifty-five when he died in 1967. He’d have to be made of stone for it not to change him.

Although he wasn’t necessarily a card-holding member of the Communist Party, was Guthrie a communist?

The way I’d describe his politics, vis-à-vis the CPUSA, is that he nailed his colors to the mast of the communist movement. He called it “plain old commonism.” He was an anti-capitalist, anti-fascist, and devoted socialist to the end of his life, but he was also too much of an individualist to fit into any party discipline or structure.

How was Guthrie’s music both embraced and ignored by political actors, organizations, and movements?

In the late 1930s, he had a very small audience of Dust Bowl migrants on Los Angeles radio. That’s when he began singing political songs. He moved to New York City in 1940, and during his productive years there — only about twelve years of recording and performing, before Huntington’s disease put him out of commission — he probably wasn’t much noticed beyond the city’s bohemian or leftist milieu.

It wasn’t until his torch was picked up by a new generation, what’s been called “Woody’s Children,” that his work became more widely known. Pete Seeger was largely the link between these two generations. Woody was still in the hospital while Pete began to take his songs to a wider audience. Then behind Pete were the likes of Bob Dylan; Peter, Paul, and Mary; Tom Paxton; Joan Baez — all of whom were devoted acolytes.

How were some of Guthrie’s songs, like “This Land is Your Land,” depoliticized when he himself remained such a political artist?

That’s a complex question requiring a complex answer. First of all, yes, he was indeed “a political artist,” but we’ve been finding out lately how much more expansive an artist he was, beyond the political dimension. In addition to being a songwriter, he was a poet, novelist, playwright, painter, illustrator, sculptor, and essayist — truly a modern, often abstract, artist in all senses of the word.

He engaged with subjects such as love, sex, the environment, science and technology, mass communications, cinema, theater, and literature. He was cosmopolitan, sophisticated, and urban, behind the pose of the unlettered “Okie Bard” or “Dust Bowl Balladeer.” He had a great interest in Jewish culture and history, having married into a Jewish family, and he even wrote some songs in Yiddish. (My book Woody Guthrie’s Modern World Blues focuses on all his modern expansiveness.) So there’s a lot of his work that can be depoliticized by folks who are looking to do that.

With “This Land Is Your Land,” we’re not sure exactly why it was depoliticized or even who was responsible for it. We know that the original manuscript contains the three anti-capitalist verses that probably weren’t sung at too many Republican Party conventions, and we know there’s only one version that Woody recorded with the verse against private property.

Pete Seeger believed that the short, anodyne, apolitical version that most of us sang in school was down to Woody treating that song just as one of thousands of his songs: casually. He’d forget verses or not bother to sing them depending on his mood. Possibly he was constricted by the three-minute time limit often imposed on 78 RPM recordings, producing the truncated version that was largely picked up and first circulated through school songbooks. And that particular version of “This Land” is what got Woody noticed — and, as his friend Irwin Silber said, “They’ve taken a revolutionary and turned him into a conservationist!”

How did Guthrie’s politics affect his musical career? In Woody Guthrie, American Radical, he comes across as a musician wanting to be part of a radical labor movement, but that movement both fails to recognize his value and largely abandons its radicalism.

There were only a few brief episodes when Guthrie sought a musical “career” — when the lure of monetary reward was attractive to him — such as his roughly twelve weeks on CBS radio after the war or when he was briefly a cast member of the radio show “Pipe Smoking Time,” for which he bastardized his Dust Bowl Ballad, “So Long, It’s Been Good to Know Yuh” into a contemptible jingle. He hated himself for having done this.

It is true, though, that often he wanted to be part of the labor movement more than the movement wanted him. Pete Seeger remembered the two of them going to sing at a union meeting in the Midwest somewhere, and the delegates were irritated with them, saying, “We’ve got work to do. What are these hillbilly singers doing here?”

Having said this, there were chapters or sectors within the labor movement who were happy for him to be part of the struggle, usually on a more local basis, on picket lines or for fundraisers or whatever. I think we get into trouble when we begin to talk about a unified, monolithic “labor movement” anyway. Surely, no such animal ever existed in America.

Both Bob Dylan and The Beatles have cited Guthrie as an inspiration. What lasting influence did he have on music? And is there any corresponding influence on politics to speak of?

Woody’s influence on music is easier to identify than his influence on politics. After all, if you’re going to influence someone like Dylan, or The Beatles, or, later, Joe Strummer, Bruce Springsteen, and Billy Bragg, that’s going to have a huge impact. He seemed to define the “singer-songwriter” for so many people.

In terms of political influence, it’s hard to say. I do know that something of Woody’s often pops up during a political debate or a time of political crisis. For instance, the scathing verses and prose that he wrote about his racist landlord, Fred Trump, back in the 1950s — as you can imagine, they’ve been referenced a lot over the past four years.

I discovered those writings in the Woody Guthrie Archives back in 2014 and revealed them to the world in 2016, just after Donald Trump announced his candidacy. And as the 2020 election approaches, I imagine we’ll be seeing a few more references to “Old Man Trump,” as Woody called him.

Will Kaufman is a professor of American literature and culture at the University of Central Lancashire, England. His most recent book on Woody Guthrie is Mapping Woody Guthrie.

Jacobin's new issue, “After Bernie,” is out now. Our questions are simple: what did Bernie accomplish, why did he fail, what is his legacy, and how should we continue the struggle for democratic socialism? Get a discounted print subscription today!