Thirty years after murder of eight people, including six Jesuits, those who ordered deaths may finally face consequences 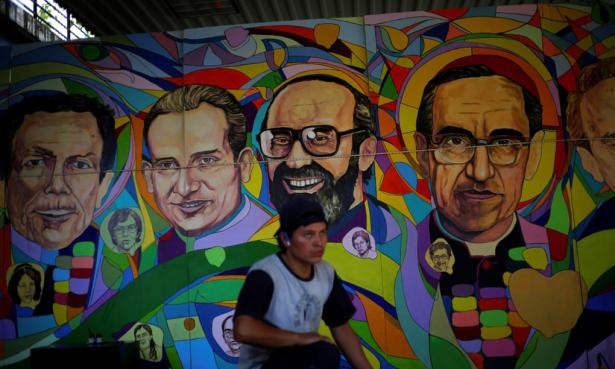 A mural by artist Renacho Melgar in San Salvador depicts the Jesuit priests murdered by death squads in 1989. Ignacio Martín-Baró is third from left., Rodrigo Sura/EPA

A few hours before he was shot dead in the campus garden of his university in San Salvador, Ignacio Martín-Baró rang his family back in Spain to let them know he was OK. “It’s all fine,” the Jesuit, psychologist and academic told his parents. “The army is all around us.”

The following morning, Martín-Baró was dead, murdered by a military death squad along with five Jesuit colleagues, a housekeeper and her 15-year-old daughter.

The priests, five of them Spanish, became some of the best known victims of El Salvador’s civil war, the 12-year conflict between the US-backed military junta and the leftwing guerrillas of the Farabundo Martí National Liberation Front (FMLN) that cost more than 75,000 lives.

While the US government and the Salvadoran military fought to snuff out what they saw as a communist uprising, the Jesuits, who worked at the Central American University (UCA) in San Salvador, sought a negotiated peace agreement.

Looking back across the gulf that separates the present from the events of 16 November 1989, Martín-Baró’s elder brother, Carlos, thinks he knows what Ignacio – Nacho to those who knew him – was up to when he called home for the last time. “It was a very Nacho way of telling them not to worry, but it wasn’t without irony.

“He also spoke to my sister Alicia that night and held up the receiver and told her to listen to the firefight outside. I think it was an elegant, ironic way for him to say goodbye to them and to life itself.”

Today, more than three decades after that farewell, Carlos is quietly hopeful that Nacho and the seven others killed in one of the most infamous atrocities of the civil war may finally receive some measure of posthumous justice.

Using proceedings brought under the principle of universal jurisdiction – which allows human rights crimes committed in one country to be investigated in another – a former Salvadoran army colonel who was also a security minister has been on trial in Madrid, accused of involvement in the “decision, design and execution” of the murders.

During nine sessions spread across June and July, Col Inocente Orlando Montano sat in a wheelchair in the Spanish courtroom, his hair closely cropped and a blue mask covering his mouth, and argued his innocence 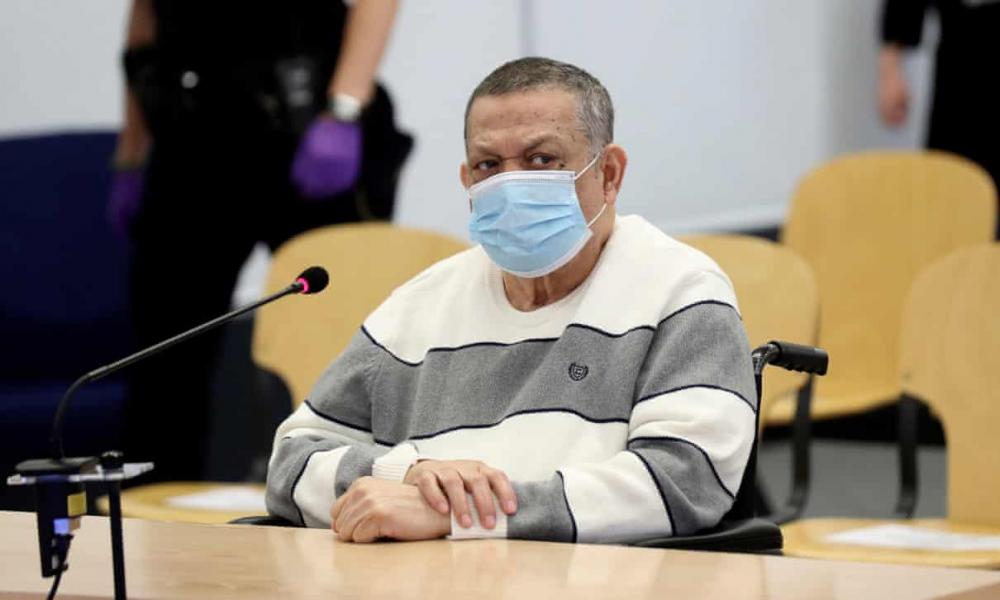 Yes, he told the court, he had been a member of La Tandona, a group of violent and corrupt senior army officers whose members had risen to the top of El Salvador’s political and military elite.

But Montano insisted that he had “nothing against the Jesuits”. Nor had he ever participated in a meeting where plans were hatched to kill the priests and blame their deaths on the FMLN in a bid to derail peace talks that would have curtailed La Tandona’s power and reach.

His claims, however, were contradicted by Yusshy René Mendoza, another Salvadoran former soldier who acted as a prosecution witness after proceedings against him were dropped because the statute of limitations had expired and because of the remorse and cooperation he had shown.

Mendoza told the court that members of the military high command – including Montano – had met and decided that “drastic” measures were needed to tackle the FMLN guerrillas, their sympathisers and others.

On the night of 15 November 1989, Mendoza added, he and others were informed that the order had been given to “eliminate” the UCA’s rector, Father Ignacio Ellacuría, a liberation theologian and a pivotal figure in the push for peace.

In the early hours of the following day, members of the elite, US-trained counter-insurgency Atlacatl battalion entered the priests’ lodgings and launched an attack on the pretext of searching the campus for rebels. With them they carried an AK-47 rifle taken from the FMLN guerrillas.

Ellacuría, 59 and originally from Bilbao, was shot dead, as were Nacho Martín-Baró, 47, and Segundo Montes, 56, both from Valladolid; Juan Ramón Moreno, 56, from Navarra; and Amando López, 53, from Burgos.

The death squad killed a Salvadoran Jesuit, Joaquin López y López, 71, in his room before murdering Julia Elba Ramos, 42, and her daughter, Celina, 15. Ramos was the housekeeper for another group of Jesuits, but lived on the university campus with her husband and daughter. 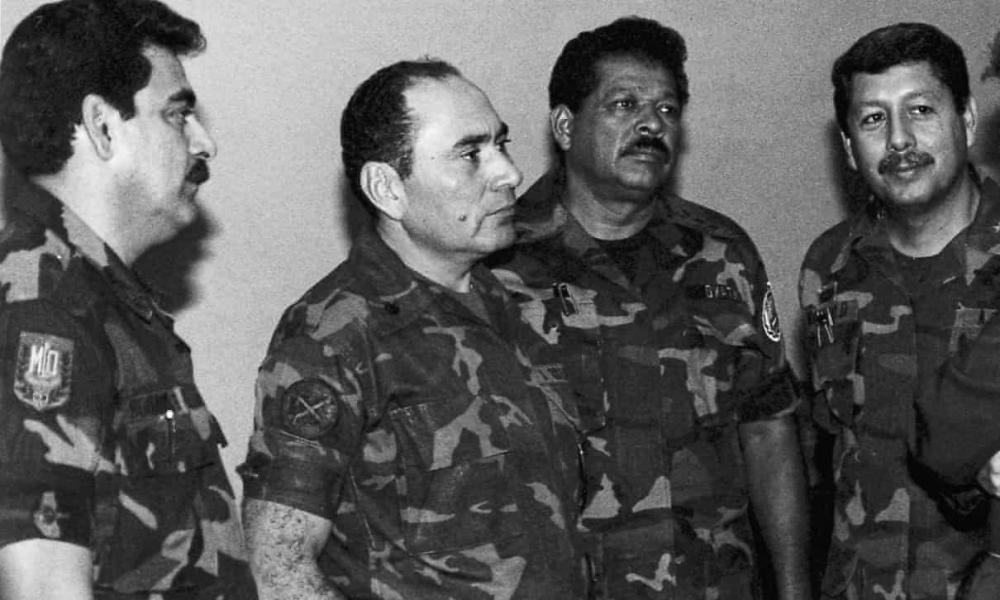 Carlos has little doubt that his brother knew what was coming. Two or three months earlier, Nacho had come to visit him in Madrid. He had not been in good shape. Nacho’s physical health had deteriorated – his bedside table was stacked with different medicines – and the noise of passing planes made him jump.

Even so, Nacho refused to abandon El Salvador. Like his fellow Jesuits, he was deeply committed to bringing an end to the war and to the suffering of its people.

“He knew where he needed to be,” says Carlos. “And that knowledge gave him the strength and resolve to carry on and to be a true Salvadoran. I always say that Nacho was most real when he was in El Salvador. His love for the country and determination to fight for its people only grew right until the end.”

As a larger-than-life boy – “he seemed too big to fit into his own body” – Nacho had been an obsessive and prodigious magician, his brother remembers. “But,” he adds, “it was El Salvador that gave him the gift of reality.”

Once Carlos’s wife had ironed his clothes and the goodbyes had been said, Nacho headed back to El Salvador, all too aware that he might be about to give his life to the country that had given him the truest sense of his calling, and of his own self.

Even before news of his murder reached the family in Spain, Nacho and Carlos’s father had a sense that his son was dead.

Such foresight eluded both the architects of the murders and the US government of President George Bush. The operation would prove as counterproductive as it was savage, and provoked an international outcry that contributed to the US’s decision to pull its support for El Salvador’s military regime.

“These assassinations demonstrated to the US government – the military’s most important ally – that efforts to reform the officer corps had failed,” says Terry Karl, Gildred professor emeritus of political science and Latin American studies at Stanford University.

“The US public, seared by Vietnam, never supported intervention in Central America. Pressured by Congress, the George Bush administration finally cut off most US aid and supported the UN-sponsored negotiated settlement the Jesuits had sought all along.”

Karl, who served as an expert witness in the proceedings, points out that the murders were “a landmark event in the US” – at least until the country moved on to its next intervention, in Iraq.

“This dramatic lesson regarding the costs of aiding brutal allies who kill unarmed civilians at will – which should have been the central takeaway from this university slaughter – was set aside,” she says.

“This led to the same type of death-squad activities, linked to official militaries, that had plagued El Salvador – not only in Iraq, but also in Syria.”

But, she adds, there may still be room for a flicker of optimism. “El Salvador stands virtually alone in that a successful trial regarding criminal acts in its civil war has yet to occur. The Madrid trial of these murders, whatever its outcome, has shone a very bright light on this solitary and isolated position.” 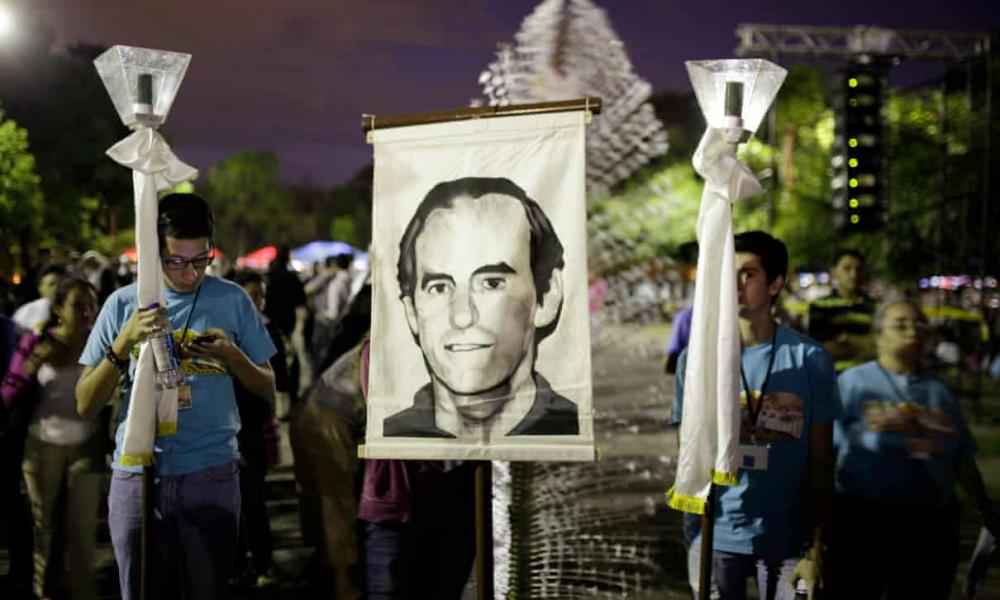 A 2014 procession in San Salvador commemorating the 25th anniversary of the massacre. The banner shows Father Ignacio Ellacuria. Photograph: Reuters

Or as Almudena Bernabéu, a Spanish human rights lawyer who helped build the case against Montano and get him extradited from the US, puts it: “It’s not just a crime that happened 30 years ago, it’s about what impunity really means.”

A verdict is expected this month. For Carlos, the trial has not been about revenge or hatred – “it wouldn’t really make any sense” – but about an end to that impunity.

Thirty long years have passed, but they have done nothing to lessen his love for his brother, nor his pride in Nacho’s social and intellectual achievements.

But the pain, like the love, lingers, and the photographs taken in the campus garden after the attack often creep into his mind.

“In the pictures, you can see Nacho very clearly, lying stretched out with the others in the Jesuits’ garden. With a mixture of horror and tenderness, I noticed that he was wearing one of the shirts my wife had ironed for him here in Madrid before he went back to El Salvador. It was a short-sleeved blue shirt.”

Carlos will always remember his brother as a man whose heart was rivalled in size only by his intelligence, and as a scholar and teacher who left behind an important body of work. But the photos have never left him and never will.

“They stir horror and love and point me back towards my childhood,” he says. “But I have moved forward and understood, with a deep sadness, how those soldiers cut him down. This is how I have lived my brother’s life and death. And I’m still living it.”

Sam Jones is Madrid correspondent for the Guardian